To walk into a room of wall to wall Emily Pace paintings is a somewhat overwhelming experience. To have twenty-five of her works lined up along the four walls of a gallery as they were at her 1982 show at New Vision in Auckland presents, at first, a disconcerting sensation for one's eye to comprehend. The reason is that the initial impact of Pace's work is so powerful. Colours and shapes of every conception explode off the canvases in such a seemingly chaotic way that the mind is jarred to attention and forced to observe: while there is the dilemma of not knowing, at first, where to look, or at what. It takes a long and concentrated perusal of each painting before something sparks, enabling you to flow into the content matter before you.

And it is in the content of her work that this painter's real power lies. At first her use of a vast array of colours and shapes seems the result of a random attack in abstract fashion - and I don't doubt for a minute that this is the way in which she works: tubes of paint squirting, brushes slashing, as she applies all her passion to the piece of the moment. But she has a confidence in her work which makes me believe that from the outset she knows exactly what she wants; and it is just a frenetic process she uses to get it out and into view before she moves on to the next. Each work is carefully layered and structured with authority to achieve the greatest impact for her subject matter. The colours are clustered and interwoven with the shapes - in patterns arranged to highlight the emotion contained within. Sometimes the paint is applied thickly, sometimes thinly, for the same reason: but all with a controlled directness. 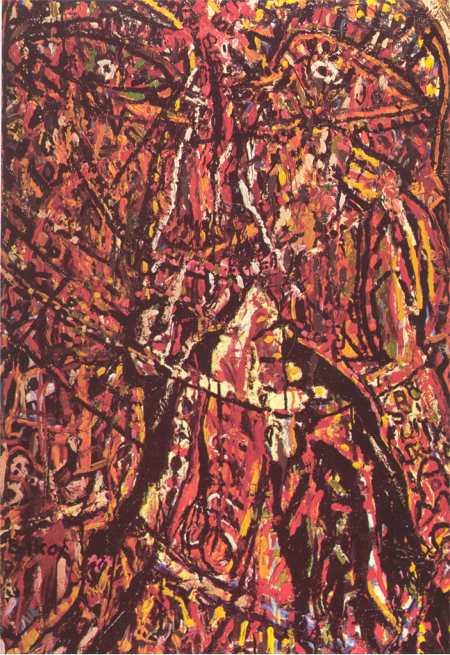 EMILY PACE Tears for Biko 1982 oil on board

A long, involved self-teaching process has been necessary to attain this level of confidence, I am sure. On viewing some of Emily Pace's early work, from back in the 'sixties, a nervousness (which has definitely now left her work) is in evidence. Some pieces are directly from Pollock, and other influences of this ilk; and some have shapes that are too top heavy; so that the colours have receded to a minor place in the structure of the thing. As you move through her work from the 'seventies, you can see this learning-by-testing process slowly bringing together the polarities, with which she has seemed to have been struggling. Her colour, which seemed always to be slightly behind in impact, has been brought to the fore so that she could launch herself, with no hindering doubts, into the 'eighties.

Emily Pace is a statement artist, and a strong one. Being a woman of Maori blood in New Zealand in the 'eighties, would certainly put one in the position of having statements to make concerning injustices that one may have had to bear as a woman, and a Maori in a white and male dominated society. But Pace has transcended any preoccupation with male/female-white/black subjective grievances that could have weighed down her work. She has kept things objective, even when dealing with subjects of a personal vein. She has aimed any statements she has wanted to make at humankind as a whole, so that anyone can receive them in a objective, humanitarian way.

An example comes to mind. Father and Son from 1981 shows a huge father figure, with fear in his eyes, clutching a small wide-eyed and innocent boy with bowed head. The boy seems poised to receive all the hurt, pain and prejudice through fear that the father has accumulated in the course of his life. A small figure of Christ peers out at the two of them and it is this image which bring in a religious theme. God gave his only son - the ultimate sacrifice - and so will fathers everywhere have to sacrifice their own sons at some stage to life - a hard sacrifice to make considering the very strong bond of father and son and the need they have for each other. This is not a conventional religious painting by any means: it just ties the practical to the theory in an open way.

In her last show at New Vision, Pace seems to have settled her statements back to the earth. Most of the work is a series of paintings offered as a homage to Tane Mahuta, God of the Forests: God of the Trees. At first sight they seem to be angry statements: but this is misleading. Beneath the surface they can be found to be serenely peaceful. Her colours have become brighter and yet, strangely, softer.

These are New Zealand bush scenes, and we are given the opportunity of peering into them without having to leave the city. From the outside, looking in on, any piece of native forest, it at first appears thick, uninviting and threatening. But once amongst it, a great tranquillity descends upon you, and if you let yourself flow with the atmosphere of it you can understand many unspoken things about life. Emily Pace understands this, and her anger on the surface stems from the realisation that the chance to experience this at first hand is slipping away faster than we think, with the plundering of our natural wealth motivated by greed a never ending process. She is concerned and angry about it, and determined to do something the best way she knows - in her art.

A major work in this show - the only one (logically) not for sale - Tears for Biko, is a searing comment on the death of Stephen Biko, the South African who fought so hard for his people, and who became a casualty of the turmoil in his country. Once again, we are confronted with facts only in this painting. Whatever your views on this touchy subject, facts cannot help but remain. Biko died wrongly under mysterious circumstances, and this painting weeps for the wrongs of all the world, symbolised by his death. Rivers of black pour down the centre of it. There is a struggle between colours suggesting the struggle of protest. A huge face peers out with fearful eyes, the whites of them staring. The mouth is open in a defiant cry of rights denied, and the overall impression is that this man has accepted his destiny as being one of torture, pain and anguish - and then death. The word Biko flashes out all over the canvas as an echo that, although gone, he is certainly not forgotten. This is the strongest statement I have seen in her work so far, and it was this artist's contribution to the stream of information we were presented with at the time of the tour. This to me at least was honest. And if anyone doubts that there is no power left in art, it is interesting to note that a work of Emily Pace done about the same time was confiscated by the police (and never returned) while on display at Aotea Square in Auckland.