When those of us living in the north of New Zealand who may have lacked first-hand knowledge of painting in the south first saw work by Rita Angus in Auckland it was something of a revelation. Colin McCahon had told us of this remarkable individualist: but it was not, as I remember, until her appearance in the Auckland City Art Gallery's Eight New Zealand Painters exhibition in 1957 that I first saw actual works by Rita Angus. The oil Central Otago (cat.no. 100 in the National Art Gallery's catalogue) and Head of a boy (cat.no. 26) made a lasting impression. Not long after, I was able to see works she had sent to Peter Webb for exhibition in his Argus House gallery - watercolour landscapes and flowers.

Rita Angus died in 1970. She has had to wait a long time for any tangible record of her importance in the history of this country's art. In the early days of Art New Zealand (issue 3) we were able to publish some short reminiscences by six friends of the artist, together with some evocative photographs taken by Marti Friedlander not long before the artist's death. Since then, Rita Angus's main published appearance has been in auction lists. 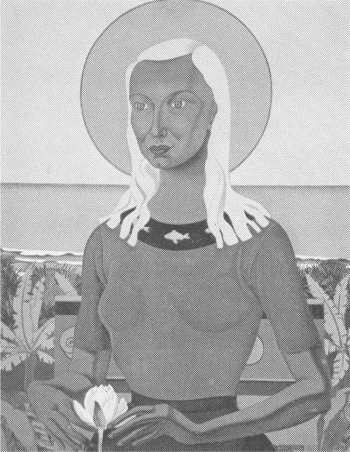 In the absence of a full-scale book on Rita Angus (and I would suggest that this is still badly needed) the National Gallery, Wellington, have brought out a publication to accompany their exhibition that is a worthy stop-gap. (I have not yet seen the exhibition itself so I cannot offer any comment on the catalogue in relation to it.)

The National Gallery's book / catalogue takes the form of six individual essays on the painter, with a catalogue divided into categories: Self-Portraits and the Goddess Portraits; Portraits; Plant, Growth and Still-Life; Landscapes and Sketchbooks.

After a preface by the National Gallery's director and co-ordinatorof the exhibition, Luit Bieringa, the key biographical essay is by Janet Paul and sketches the painter's background and career from the late 'twenties to her death. Melvin Day, in his essay The Years 1908-1958 concentrates on her approach to her work. Anne Kirker writes sympathetically on the last decade of her life. Michael Dunn, in a valuable piece of scholarship, outlines the growth of her reputation from 1930 to 1970, mainly by analysing what has been written about her. Ronald Brownson's interesting and idiosyncratic piece is an evocation of the symbolic and meaning content of Rita Angus's works. Finally, there is a short contribution by Anthony Mackle on the portraiture.

It seems that the organisers of this exhibition have intended to present a more honest picture of the artist's achievement by bringing together many different aspects of her work, and not attempting to impose a selective view. Those of us who in the past were most captivated by Rita Angus's landscapes and more straight-forward portraits, and found some of the figure-painting (the goddess portraits) faintly embarrassing, might have to revise our conclusions. I still find it difficult to come to terms with the sugary A Goddess of Mercy: but it has to be admitted that such a transmuted self-portrait as Rutu (1951) is an extraordinary achievement by any standards. I wonder, though, whether the exhibition and its catalogue have really consolidated Rita Angus's reputation in the way that they might have - and whether it was wise to include so many problematic and unfinished works while stronger ones, one suspects, remain untraced.

After all due appreciation for the Rita Angus book/catalogue has been conveyed, it has to be said that, considered as a piece of book production, it really does leave something to be desired. Though most of the colour plates are adequate, the monochrome illustrations (which are in the majority) have the washed-out appearance that is the characteristic of second-rate photo-lithographic printing. The coarseness of the screen is obtrusive and the range of tonal values truncated. With these standards of printing the postage-stamp-sized illustrations cut into the text of the essays are so indistinct as to be superfluous. So far as the design and typography are concerned I would call them undistinguished. Coming as it does from a reputable source the publication looks unaccountably amateurish. The choice of the typeface (a utilitarian sans-serif) is puzzling. And surely a classic requirement has been flouted by setting the essays in a measure of 30 ems, which, in the chosen point-size, spins out an average of sixteen words to the line - too many for comfortable reading.

The publishers will, I hope, forgive my frankness. When all is said and done their publication deserves much gratitude as a substantial contribution to the history of New Zealand art.