The Theatre of Extremes

An Evening with Wanda's Gander

The theatre of extremes takes the audience with it - right over the edge. Sentences and scripts are tossed aside; hearing can be as intermittent as strobe lighting; characters parade genitals on their heads, and seem oblivious of each other's presence.

Sally Hollis-McLeod and Derek Ward call their theatre the theatre of extremes. It could just as well be called the theatre of the emotions and personal experience. 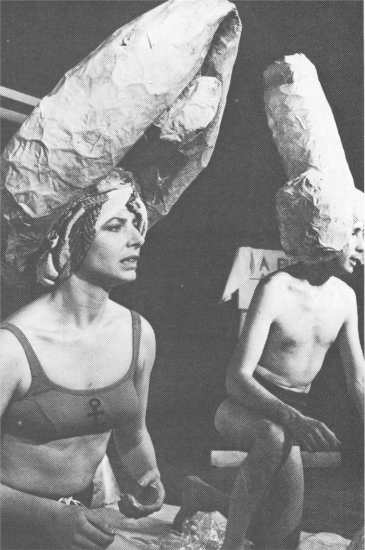 The first of the three pieces, Norm and Rita, was the most impressionistic. There was no story line. The two characters quite randomly paraded different faces - characters of our times labouring under the bondage of sometimes crumbling sex roles.

Hollis-McLeod was by turn the martyred, frustrated wife turning her anger and sexuality in on herself; the sexual siren manipulating like the spider that then devours its mate.

She was restrictively laced into the slavish underwear of middle-age: zipped into a fish suit like a shroud. She strapped part of a domestic chair on her shoulders, turning herself into some fantastic beast of burden.

Ward, dressed in shapeless underwear, mouthed a moth-dry lecture on anatomy almost oblivious to the woman. Speaking from a soap-box he seemed to show the public faces of male authority.

Word and sound association replaced sentences. Then, advancing, they reverted to childhood and formed a chant: 'Dirty Daddy, Dirty Daddy' - so insistent it was almost indecent.

Norm and Rita was about alienation. 'The first thing we wanted to work on was the feeling of divided self, knowing the true self was not the one presented to others, even friends', says Ward.

The pieces certainly triggered the audience's own memories. 'It's really good you can give people a pure image that sets off their own emotions. Other times it's good to give them something to laugh at', says Hollis-McLeod.

The greatest actors draw on their own experience to make their characters live. Ward thinks actors should face and go right into their own emotions. It's only by doing so they will make contact and have impact. 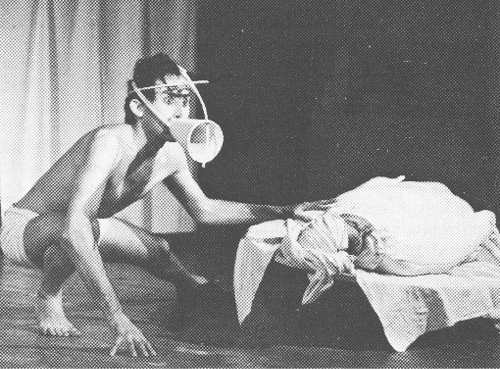 Much of his own previous political theatre left him unsatisfied. 'It didn't touch me like the work with Sally'. As an actor he has always believed he should be as free as possible from tension.

Ward (aged thirty) is slight, dark-haired, gentle but intense. Sally (aged thirty-two) is fairer, somehow more worldly than Ward, taller. Their conversation is personally revealing and frank. Their theatre is about their own conflicts and search.

The second piece - The Long Kiss - was about paranoia and schizophrenia. It was memorable and something almost perfect in itself, like a capsule filled with tinted light. The Long Kiss was a macho, Raymond Chandler-ish detective story where the detective hunts his own psychosis. Subtly-lit, it had the flicker of cinema. The two male detectives were dressed in the moulded zoot-suits of comic strip characters. In a realm defined by two huge venetian blinds, it evoked the era of the California bungalow.

Hollis-McLeod, silently going about detective business, was stalked by Ward, his eyes fixed and staring. He inched through the audience and across the stage as if on a grid, slicing the space with a steady monologue. From behind the blinds he pushed up the slats so horizontal lines zig-zagged.

The piece was about simultaneous attraction- repuIsion which culminated in the long-awaited kiss. Breaking away, looking profoundly ruffled, Hollis-McLeod spat.

The kiss was something extraordinary, she says, a 'very hard, psychosexual thing'. She remembers with obvious distaste the spittle hanging between them. A parallel was drawn with the Mafia 'mark', the kiss before a killing. For Hollis-McLeod the piece was about the parallels between sex and violence. She started with a quote from Adrienne Rich: 'In the male psyche when the chord of violence is struck, the chord of sex vibrates in response.'

Ward has been researching mental disorders. He found schizophrenia was most common among minorities and women, who were constantly being given an image not true to their self-image. This led to doubt and conflict and eventually to breakdown. It tied in with the divided self theme of the firstpiece. 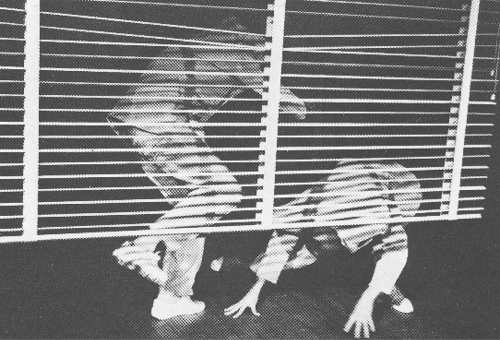 The Long Kiss
He was hot
on the trail
of his own psychosis,
and when he found
it he would
cut it down
like a dog
(Photograph by Gil Hanly)

The third piece, At the Beach, relied for effect on the huge genital models the actors wore on their heads. They paraded beach bunny and macho tricks in a humorous send-up of popular romance.

Wanda's Gander was performed for quite small and largely sympathetic audiences. It was somewhere between theatre and performance art. Meticulously planned and staged, it ruled out chance and spontaneity.

'Theatrical people see it as something quite strange', says Ward. 'On the other hand artists see it as quite theatrical.'

Hollis-McLeod is a designer, Ward an actor. They have worked together intermittently since 1979 when they did In Touch, Out of Touch, an abstract political piece.

Both have a strong political background. How does this tie in with such personal theatre?

While Wanda's Gander may not be political in the didactic sense, it is profoundly political in the way feminist ideology teaches personal is political. It is firmly rooted in contemporary concerns. Hollis-McLeod is a committed feminist, Ward says, and he has a strong female awareness. But Hollis-McLeod is more interested in being a woman producing strong art (and helping the cause that way) than producing work aimed solely at a feminist audience.

'I don't think a feminist audience necessarily has more taste than any other audience.'

Ward wants to pursue conflicts. Personally, these are usually brought out in relationships and friendships with women, he says. Pursuing that contact is essential to his growth. 'Working with Sally as a woman, I'm going to be confronting myself too.'

There's a case for supporting new theatre and developing new directions, says Ward. 'We're trying to do something different. Not different first and foremost, but we're trying to say something and say it in a different way.' Their theatre is for people aware of a culture not to do with the establishment, and it has a potentially wide audience. it appeals to people interested in new directions in art and politics, but its characters are born in the everyday world and still part of it.

The Long Kiss, at least, could be more widely performed. It is accessible, new drama infinitely adaptable for television. As British TV writers of the 'sixties changed the face of drama by becoming intimate with characters, this theatre of the 'eighties has the potentiality to be equally transformational.