Shooting was recently completed on a new film by Geoff Steven and John Maynard: Strata. This is the first feature film by the two in collaboration since Skin Deep, reviewed in these pages in 1978. 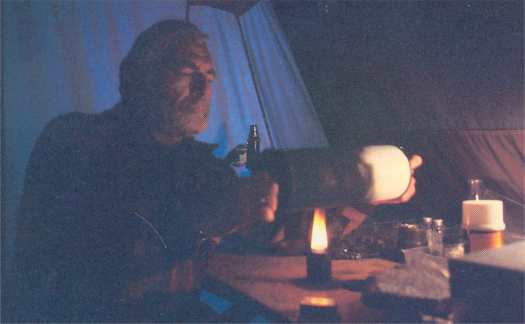 Victor preparing a
seismograph in his tent

Strata has been scripted by the director Geoff Steven in association with Ester Krumbachova - the Czechoslovakian film-maker who has exerted such an important influence on European cinema since the 'sixties. The photographic director was Leon Narbey. A special feature is the part written in for the Czech mime artist Ctibor Turba by Krumbachova and Michael Havas, a New Zealand filmmaker living in Czechoslovakia.

Skin Deep was shot on location in Raetihi, Stevens's approach being documentary, observational in character: much of the film shot on wide-angle lenses - the whole 'objectively' seen. With Strata the director is much closer to feeling and to character. Skin Deep had been conceived as a realist film, an exploration of the attitudes and conflicting values of a small town faced with a potentially disrupting presence in their midst. But when Stevens saw it shown in Europe he became conscious of the need for some element of 'magic' in the mixture. It was with this in mind that, in Strata, he sought the involvement of Krumbachova. 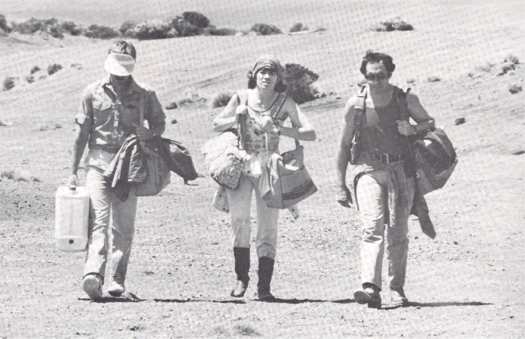 Tony, Gaylene and Keith,
lost in the desert

Strata is pervaded with a sense of mystery; it more than ever is an essay in surrealism, in what might be called 'magic realism': and this is furthered by Krumbachova's propensity for using symbols to give the impression of things not being quite what they seem; and Stevens's concern as a director to use colours and locations 'not as overt symbols but as nuances' (an example is the employment of three tents where the vulcanologists carry out their conversation - in green, red and brown, depending on the particular emotional state). It was important to their conception that every prop must carry meaning: so that the film is graphically precise - the full power of the landforms allowed to intrude and dominate. 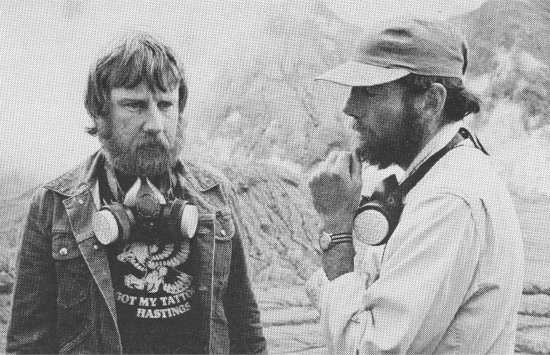 Geoff Steven and Leon
Narbey on location on
White Island

The landscape, which is a central character in Strata, is the region of New Zealand's Central Plateau. The actions and feelings of the people are dominated by the area's pervasive influence sometimes in an ambivalent way. On the one hand, they are daunted by the feelings of large-scale alienation; the impression made on them by the tortured beauty of the land-forms; and on the other, they feel supported, cocooned by the vast earth mother. It is against such a materially and psychologically disturbing background that characters change and develop.

These are divided into two main groups. The first, led by Victor (Nigel Davenport), a vulcanologist accompanied by his autobiographers, Margaret, a journalist (Judy Morris) and Steve, a photographer (John Banas), explore the strata of human experience through the objective analytical processes of talking and recording. Their reactions towards one another are shot in three interiors, three tents, and are verbal, with little physical involvement. 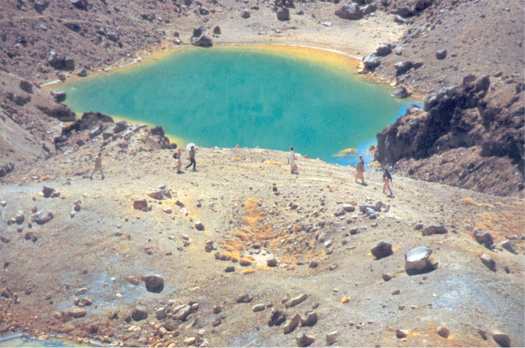 The quarantined group
are rescued at the
Emerald Lakes

By contrast, the other group, lost on a volcano having escaped from quarantine, only come to understand each other through their individual physical reactions to the huge and alien landscape they are placed in. Their intellectual exchange is minimal, and Thomas, the terrorist (Ctibor Turba), has no English and depends on his use of mime to communicate. As an extension of his script, Geoff Steven was able in the shooting to adapt certain scenes and sequences to fit in the circumstances of the weather. For instance: the cast and crew were trapped on the mountain when the weather closed in, and filming continued. However, this situation could never be repeated, and so his original ideas were changed and developed.

The character of Victor, the reserved and intelligent English vulcanologist (the 'universal man') is contrasted with Peter Nicholl's role as a young New Zealand married man, wanting to assert his masculinity, discovering his own frailty. His wife, Gaylene (Mary Regan) is something of a foil for Margaret, the hard-headed journalist. And Thomas has to come to terms with his feelings about the capitalist Eric (Tom Brennan) in conflict with his own revolutionary ideology. 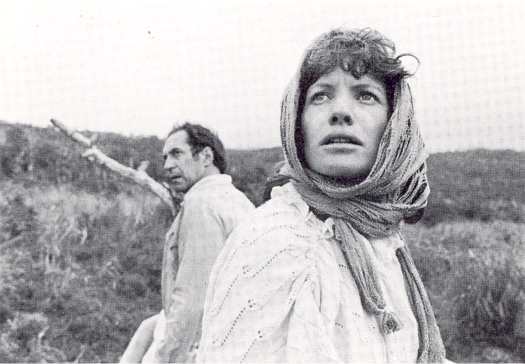 Music, composed and played by New Zealand jazz pianist Mike Nock, now living in New York, is an important element in the film. It is used to add texture and depth to the characterizations, and to extend the surreal quality of the images. Nock fitted the score to a video of the film, working on acoustic piano, when he came here recently from New York.

Eric with Thomas
in the bush

Maynard and Stevens have consistently been involved in films which are primarily about ideas. They see this as the essential ingredient in film-making - in contrast to many other feature filmmakers, who perhaps consider the commercial viability of the film as being paramount. Recent successful New Zealand films have tended to reflect in a somewhat slanted way the values of our culture - male domination, the thrill of a car chase, violence, sexual stereotypes and grubby humour. New Zealand society is obviously more complex. The new language of cinema gives writers and film-makers a chance to explore this complexity. 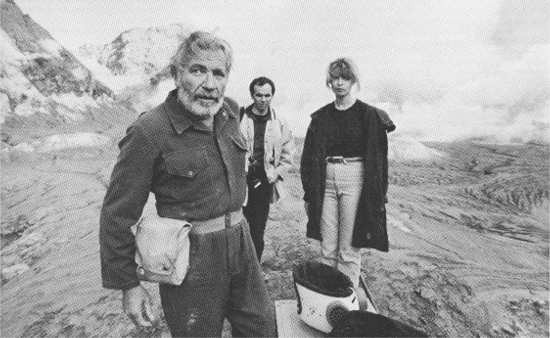