From Print To Construction

Among the recipients of this year's Queen Elizabeth II Arts Council grants is New Zealand's master printmaker, painter and designer, John Drawbridge. His intention is to 'work out some of the themes which started to emerge whilst working on the Beehive mural' and 'to resolve ideas in relation to his painting and prints'.1 The brief is broadly defined: yet not unpredictable when one retraces Drawbridge's development from the recent Homage to Malevich series of prints and constructions back to the mural at Parliament House of 1973-76; and further, to his extended period abroad which began in 1957. 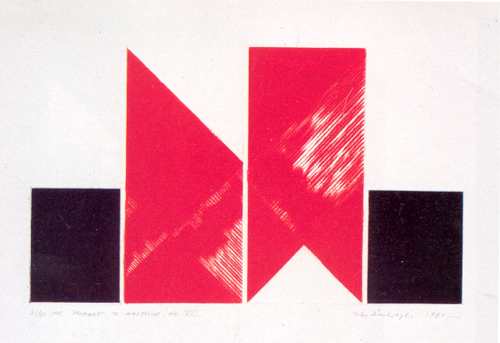 When questioned a short while ago on aspects of his career, Drawbridge described the experience of studying in London and Paris as the real determinant for his commitment to art.2 Initially he went overseas to learn about textile design but quickly found that he responded more to' the great prints that were emerging in Britain then': such as the bold intaglio images of Merlyn Evans.3 Evans was a tutor in printmaking at the Central School of Arts and Crafts and it was here that Drawbridge was able to observe the production of his great Vertical Suite in Black - a series of prints made with aquatint and mezzotint. Evans gave the laborious method a modern slant by employing large abstract forms printed black, which he contrasted with partially rocked passages to make striated greys.

Drawbridge had previously worked in screenprinting and lithography, and to a lesser extent etching, which he had thought 'rather dull'. During the 1950s New Zealand offered virtually no opportunity to view original artist's prints from abroad. The closest examples were sets of lithographs assembled for schools, which reproduced paintings and gouaches by the English moderns such as Henry Moore and Graham Sutherland. By comparison, London provided a stimulating and vital artistic environment. 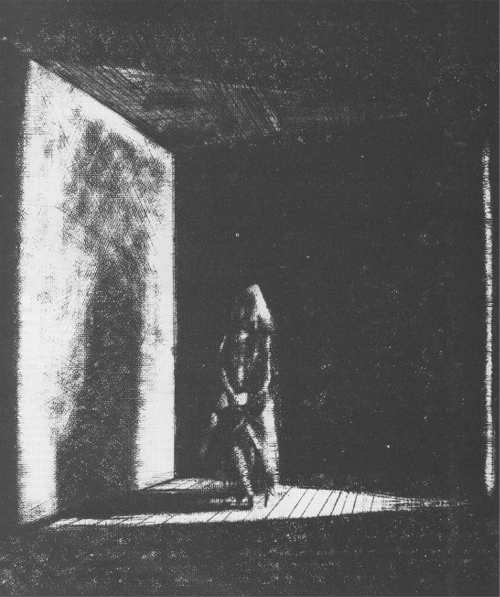 In the late 1950s the revolutionary impact of American painting was making its force felt. A touring Jackson Pollock retrospective came to the Whitechapel Art Gallery in November 1958; and was followed immediately by the New American Painting show at the Tate. The catalogue listed over eighty works by seventeen painters, and although a substantial number were in the category of Abstract Expressionism, Barnett Newman was included. His huge minimal canvases, often painted red and interrupted with vertical stripes ('zips') made him a hero-figure for the younger generation of English artists. For Drawbridge, these exhibitions were his first taste of contemporary painting from the United States, and it was a total revelation to him.

In France he discovered a markedly different context: one in which the artist according to European tradition, was regarded not solely as a painter but often as sculptor and printmaker too. For the twentieth century Picasso is the supreme example.

In 1960 Drawbridge gained admission, on the strength of a portfolio of prints made under Merlyn Evans, to SM. Hayter's 'Atelier 17' in Paris. British-born, Hayter was noted for his innovation with the burin, and the textural device of natural and woven materials pressed into a soft ground and etched. His most far-reaching contribution, however, which developed from printing intaglio and relief simultaneously from one plate, has been in the realm of colour printing. It was ultimately this factor and the over-all stress on technical innovation that persuaded Drawbridge to seek an alternative print workshop in Paris (Johnny Friedlaender's) after a few months. 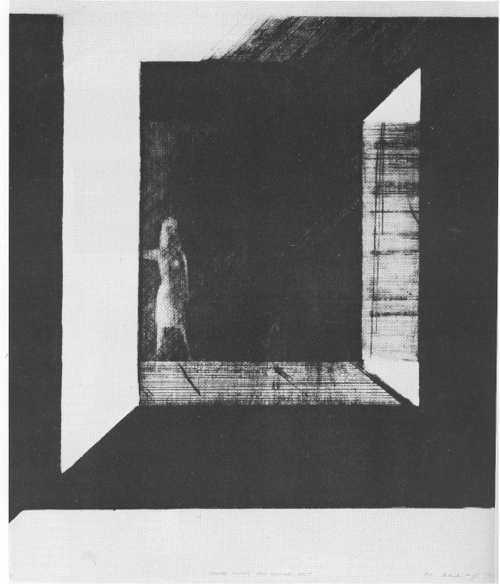 At the Friedlaender studio the atmosphere was less International and more European. Drawbridge worked alongside artists from Sweden, Germany and Italy - patiently exploring the subtleties of tone in the intaglio process. Until recently he has not regarded colour as an integral part of printmaking, seeing the art more in terms of graphic drawing and as an inheritance from the prints of Dürer and Rembrandt. Artists, like the French sculptor Henri Georges Adam, (who was honoured in 1957 by grand prizes both at Tokyo and Ljubijana Print Biennales) and Armin Landeck from the United States (who worked for a time at 'Atelier l7') had a similar approach to Drawbridge. Both conceived images in terms of black ink on a white ground, building up spatial nets of etched or burin-engraved lines with ruler precision.

Their method was in accord, too, with Jacques Villon's Cubist drypoints of seated figures which Drawbridge had admired in Paris. Drawbridge's Seated Woman (1960) is probably his most characteristic and significant print from this period. The figure of his wife, the sculptor and silversmith Tanya Ashken, emerges from the web of cross-hatched filaments: a shape placed to articulate the play of light in a confined interior. It is an intimate and tender image which led in later years to the memorable suite of Tanya Going and Coming.4

On his return to New Zealand in 1964, Drawbridge took up the teaching position in the School of Design at Wellington Polytechnic which has by and large occupied him up to the present. His reputation as an inspired instructor in intaglio printmaking is well-known. Among his former pupils who have subsequently led the field both as teachers and as artists are Kate Coolahan, Penny Ormerod and John Lethbridge. In some cases, these artists have developed further in the technical aspects of making prints: Coolahan, for example, uses photo-etching and hand-made paper. Why, one may ask, has Drawbridge experimented only temporarily with the photographic image (at Birgit Skiold's London studio in 1973) which informs so many artist's prints today? An answer may be provided by his comment: 'I like mezzotint very much because it is direct handling, as drypoint is, without acid'. It is 'the response to touch as well as looking' that motivates Drawbridge's method. 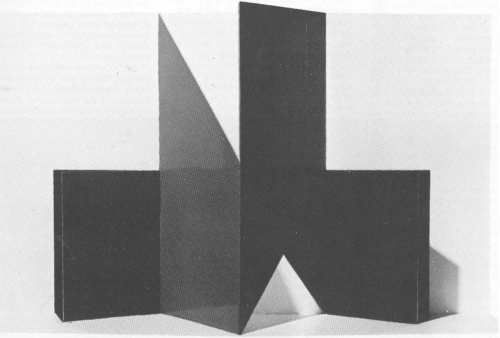 The longest break Drawbridge has had from teaching occurred in the early 1970s when he was occupied almost fulltime on the vast Beehive mural. He had begun to produce murals in England, but it wasn't until his design for the New Zealand Pavilion at Expo '70 in Osaka that he was able to realise his full potential as a muralist. In Paris he had seen and admired the work of Yaacov Agam, who during the 1950s was in the front rank of kinetic artists. As with the example of Evans in printmaking, Agam provided a 'jumping off' point. The gleaming, scene-shifting curve of painted metal which comprises the Beehive mural had close affinities with the Expo '70 project, and in turn is expected this year to be developed further in the mural for the new library complex at the School of Architecture, Auckland University.

Where does this take us with regard to Drawbridge's prints? Furthermore, how do his paintings and watercolours (given that they are in part a response to particular media) fit into this creative fabric- Whether he retains some vestige of the real world, such as elements of a landscape (clouds for example) seen through a door or window, or rejects objectivity altogether, his images are all fundamentally about space and the effects of light.

From the beginning, a dramatic structural use of space has been evident in all aspects of Drawbridge's work - even though he sees the art of the print as a quiet, contemplative and intimate activity, in contrast with the grand public event of a large-scale mural. One could attempt to reconcile these polarities by tracing the genesis of two constructions made from painted aluminium sheeting which appeared at the New Vision Gallery in Auckland during the middle of 1981.

The constructions stood fifty-two centimetres in height; the size one expects of a domestic sculpture. Their precise, abstract shapes were worked out from small cardboard marquettes: but the original conception came from a series of six prints termed Homage to Malevich. On a visit to Europe at the end of the 1970s, Drawbridge had been strongly attracted to the collection of Suprematist paintings by Kasimir Malevich at the Stedelijk Museum in Amsterdam. By 1980 the experience of these early twentieth century works, and his researches on the artist, began to emerge as the central theme of his prints. Using a number of small copper plates, worked with drypoint and mezzotint and inked up in black and red, Drawbridge regarded them as modular units: after the first edition he reorganised them for subsequent prints in the series. Although completely satisfying in themselves, these immaculate prints also served as studies for the constructions which followed. Currently, Drawbridge admits that the full realisation of his theme demands an opportunity to make the constructions much larger and truly monumental. Perhaps that will be the next step.

1. Minutes of the visual arts adjudication panel, Queen Elizabeth II Arts Council of New Zealand, 1981.
2. Interview with the author, 27 February 1982. Unless otherwise noted, all passages in quotes throughout the text are statements by the artist.
3. 'Intaglio' is any technique by which an image is obtained from inked areas below the surface of a metal plate - generally produced by engraving, drypoint and mezzotint, or by etching.
4. The first version of the series earned Drawbridge a prize in the prestigious 'Bianco e Nero' print biennale at Lugano, Switzerland in 1968.