My initial reaction to the first dozen or so pages of this book was that it was going to be tough going: but in fact, once one had grown accustomed to the author's style, it proved to be worthwhile reading. It is not a book that can be rushed; the information packed into it prevents this, and it requires careful reading if the most is to be gained from it. In this respect text and illustration are sensibly linked.

In his preface, Harrison deals with the manner in which he uses the terms 'modern', 'Modernism' or 'Modernist', and points to his concern with 'what has been singled out and considered as modern in English art of the first four decades of this century' and the fact that to some extent these valuations have 'already been mapped out'.

For all this reliance on established fact, Harrison does not take the usual view that English Modernism has been the product of specific individuals more or less working in isolation or against the tide. Instead, he places such artists within their groups of associates - from which they may later have emerged as mature artists with individual reputations. It is therefore these associations of artists that receive greater stress: even though an individual may achieve greater attention as leader or rebel, as in the case of Wyndham Lewis or Ben Nicholson. 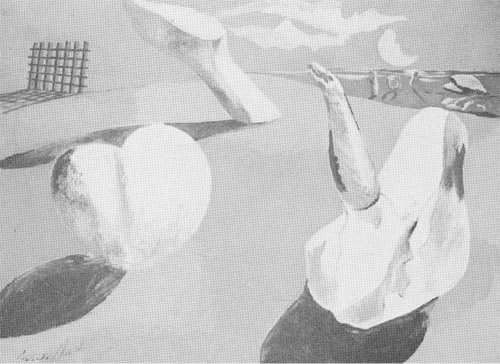 The only major painter whom Harrison does neglect somewhat is Matthew Smith: but he appears to regard Smith as the exception - too much the individualist to fit comfortably into the general grouping pattern that is the basis for his approach to English Modernism. Although Harrison states it was not his concern 'to write a social history of art', he does endeavour to place art and artists within the general social context of the period: with art as an activity that is mixed up with, and expressing, attitudes to life.

One area where this concern with social as well as artistic values emerges centres on the Omega Workshops, which not only tried to produce well-designed household items but also, for a brief period, provided common ground for a wide cross-section of England's Modernist artists. However the quixotic nature of this enterprise, and its eventual demise, Harrison sees as being as much the result of the elitism of the Bloomsbury group as the eventual philosophical conflict between the contemplative element in Roger Fry's approach to art and the Bergsonian 'life force' dynamicism adopted by the followers of Vorticism.

In his assessment of the Bloomsbury 'inner circle' (in particular, their ability as painters), Harrison is rather harsh. Although he gives all credit to the initiative of Roger Fry in promoting the two Post Impressionist exhibitions of 1910 and 1912, and Fry's support for painters like Matisse, he points to the limitation of both Fry's and Clive Bell's appreciation of the wider issues of modern art: especially their lack of understanding regarding the Cubists and the way they confused Cubism with non-objective abstraction.

Throughout the book Harrison cross-links what occured in English art with the relevant forces in European art, thus bringing into focus the wider issues of modernism and adding depth to what occurred in Britain. In contrast with the habit of New English Art Club painters of looking for models among minor, and now largely forgotten, French painters, Harrison points to the extensive (if at times furtive) contacts British 'Abstractionists' like Nicholson, Hepworth, John Piper and others had with Europeans in the 1930s and the effect this had on their attitudes in a broad historical sense where an ordered human society should dictate that the artist be 'an agent of historical change'. In turn this led to conflicts of ideals among such groups as the Seven and Five Society (of which Frances Hodgkins was an unwitting victim), and the subsequent reaction of the new English romanticism, with its ties with Surrealism (as reflected in Paul Nash, Ceri Richards and others).

It is the sense of ebb and flow of ideas and attitudes - of fruitful contact and co-operation between artists as well as rivalries and conflict - often set against the values attached by certain groups to the art they produced, that gives a largeness to Harrison's text and removes it from a bare record of historical events. To a limited extent, the author's preferences can occasionally be glimpsed: but always in a reasoned manner. In contrast to his reservation concerning the Bloomsbury painters there is his admiration for the Camden Town Group, which he sees as 'one of this century's very few successful, modern, realistic movements'; or his high assessment of Christopher Wood. Whether or not the reader agrees with the author in his grounds for such judgements, there is no question of being left high and dry in a vague area of opinion. The process of assessment is well rendered in Harrison's Postscript: The Euston Road School and the confused ideas these painters held and the dull paintings that resulted. I found this willingness to express reasoned value judgements refreshing in comparison with the neutralized approach of some art historians.