For the last year, Stephen Bambury has painted in a large studio, light and airy, on the top floor of a half-empty building right in the centre of Auckland. He is an exponent of Colour painting: which involves an exploration of colour and paint surface as subject in itself. His paintings have no decorative, naturalistic, metaphoric or autobiographical references or intents - all elements which, in his scheme of things, are extraneous to painting. He is quite uninterested in any concern with distinctively 'New Zealand' imagery, forms or features in painting. Bambury believes the painter's prime responsibility is to create paintings which 'work' as paintings - as direct visual experiences in terms of colour and paint surface. To this end he is at present working on two groups or series of paintings. There are big paintings (average size about 7 x 7 feet; though some as large as 10 x 10 feet) comprised of two rectangular canvases, each a single colour, bolted together and conventionally placed on the wall. And there are smaller works (about 3 x 2 feet) comprised either of two units of identical shape and size, or of two almost identically shaped units of slightly differing size. These paintings are disposed on a diagonal slant to the wall. In both groups, the juxtaposed colour areas are vivid and intense-blue-black and yellow; violet and orange; red and green; yellow and purple, for instance. The paint surface is asserted. Many layers of paint are applied to each canvas. The working marks are readily visible, Particularly in the large paintings, drips and the liquid formlessness of paint are exploited. The marks are a response to the process itself. They do not have any 'expressionistic' or descriptive function. 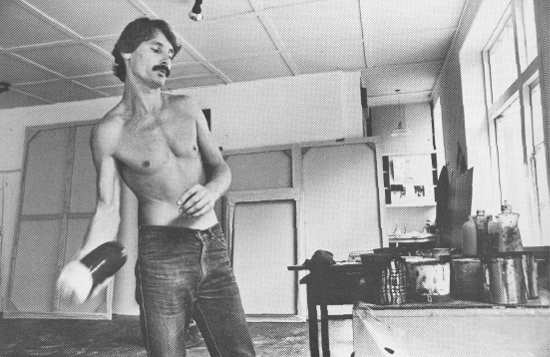 Bambury's paintings have an uncluttered directness and concentrated density that is unusual and striking amidst most contemporary New Zealand painting. In the following dialogue Bambury talks about his work and the context in which it is produced.

Leonard Bell: The formal ingredients of your paintings may seem extremely limited or restricted to many people. Do you see your pictorial means as limited or restricted?
Stephen Bambury: I don't see the means as being limited. A term often used to describe my kind of work is minimal, and I don't regard minimal painting as limited. If I come towards the essential points (of painting) and intensify them then I don't have any sense of restriction.
L. B.: Why have you chosen this particular mode of painting? S.B.: I am generally concerned with what are the most credible ways to be doing painting in this part of the century ... and with extending the issues that emerged out of minimalism and conceptualism. 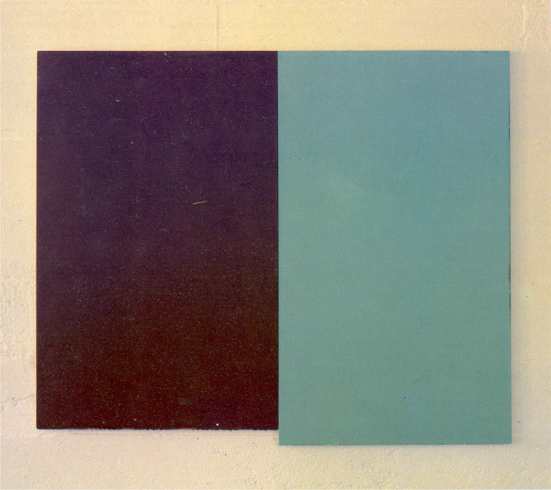 L.B.: Your paintings seem to be concerned primarily with colour, paint surface, shape, and their varying interactions. What value do these have for you?
S.B.: I am involved with the idea of the painting as an 'actualised object' - a term used by a contemporary American painter, Joseph Marioni.1 The meaning (of this term) is bound up with the way the painting is actually done. I am interested in painting that primarily projects itself as its content - that is all the elements that go to make up the object as it is completed - texture, surface, size, colour. When I make a mark the mark has no reference outside itself. If I choose to work a painting with a two inch brush that creates its own particularised form of expression of the surface and the colour - I regard that as content. I regard the use of a two inch brush over the use of a three inch brush as content, a raw pigment over tube paint as content.
L.B.: Could you say something about your working methods - the paints you use; what you hope to achieve from the multilayering of paint, for example.
S.B.: I am still very involved with the traditional means by which paintings have always been put together - canvas stretched across a timber substructure. These simple and fundamental things are important for me. It is a link to a whole heritage. I work with raw pigment, which I grind myself, with industrial polymer emulsions and various other additives that control the surface and the quality of the paint. One thing I very seldom do is use any sort of tube paint. I use thin paint - a lot of it - twenty or thirty layers added on to the surface, not absorbed into it. I am concerned with constructing with colour, in tuning the colour. It is only through the accumulation of paint, successive layers of paint, that I begin to arrive at the sort of surface I am looking for - a keying of surface and colour. 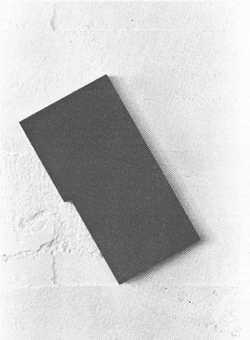 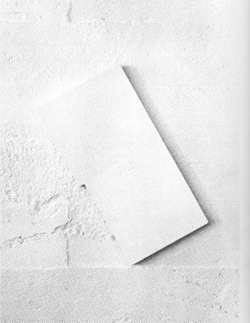 L.B.: It seems to me that the interaction between the painting and the wall on which it is hung is crucial. What do you consider the ideal kind of space for these works to be seen in?
S.B.: The ideal situation for these works to hang in combines a fairly neutral sort of wall, and (because of the large size of many of the works) a pretty large surrounding space. Even when the physical size of the work is small a fairly large neutral expanse of wall is necessary.
L.B.: All the paintings in the studio here are organised in terms of two adjoining colour areas. Why is that?
S.B.: I have been producing two colour paintings for a number of years now. Recently that has been taken a step further in that the physical structures that each colour is on are also separate. So one painting is comprised of two panels bolted together. I guess what is going on is a kind of involvement with binary sets- with the idea of one colour implying the situation for the other colour to exist. So I bounce from one thing to another - hot to cold, light to dark, left to right - within the framework of multiple binaries.

L.B.: Do you feel that viewers require an understanding of the theories sustaining your mode of painting for these works to operate successfully?
S.B.: Viewers anywhere require a certain degree of understanding of contemporary art. No doubt people who don't have any sort of background in this sort of work can still gain something and give something, but people's ability to extract things from these works is very much determined by what they can put into it . . . Yet, on the other hand, I take it that whatever I do will be intensely mysterious. I have a favourite quote which says: 'You can't stand in the same river twice'.
L. B.: What sort of reception has your work generally had in New Zealand?
S. B.: There is really quite a lot of resistance: and a fair degree of retrograde attitudinising towards the kind of painting I do.
L.B.: How do you see your own work then in the context of contemporary New Zealand art?
S.B.: Well, I'm not really sure whether I would put it into such a narrow context. The context that I would draw for myself would be much broader than that definition would allow. I tend not to draw one context for New Zealand and another context for somewhere else. For me it's just one global context.
L.B.: You spent several months in New York about a year ago. How was your work affected by this experience? Did any new directions come out of it?
S.B.: The most immediate affect New York had on me was the need to come to grips with the immediacy, the rawness of the paintings there. Before, my encounters with works of the artists I was interested in were almost exclusively gained through reproductions ... No really new directions came out of the New York trip. The experience confirmed directions I was already moving in ... Historically, the important artists were people I was interested in before - some of the abstract expressionists - Mark Rothko, Ad Rheinhardt, Barnett Newman ... Contemporary people - I saw some fine work by PM Sims, Philip Rivlin, Thornton Willis, Joel Shapiro: but the effect on me was more the collective energy I could pick up from the situation there, rather than just from individuals. 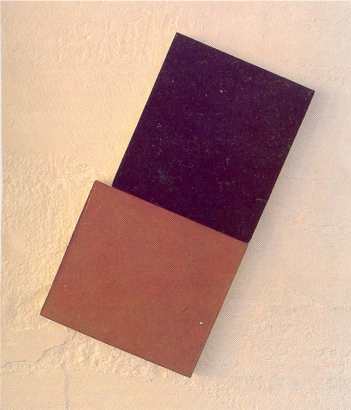 L.B.: You have chosen an inner city location for your studio - in a city where there is a very little inner city housing, and few, if any, other artists similarly located. What drew you into the city to work?
S.B.: Most artists in New Zealand are working in their houses - either in a basement or spare bedroom or what have you. I got interested in taking my art out of the domestic context. I guess it also has something to do with the energy levels I feel. Most people live in the suburbs, yet commute out of these suburbs to their employment - which creates what I feel as an energy vacuum. I feel that there is a great deal more energy in the air round the city. I quite like the industrial areas too. They are very clearly delineated for what they are there for. There's a lot less bullshit around.

1. 'The central issue of painting as an actualised object is not the colour of the object, but rather the function of an image whose objectiveness is colour'. Joseph Marioni, Painting as an Actualised Object, 1979.