This is the third volume in Gordon Brown's perceptive analysis of the development of New Zealand painting in the twentieth century - covering the two decades from 1940 to 1960, when our painters came completely to terms with the spirit of the times with works that held their own in the context of contemporary international art.

The historical background is announced against the onslaught of the Second World War. While Michael Joseph Savage was using Hitler's provocation as pretext for eloquent oratory against the 'militant and insatiable paganism' of Nazism, the effects of the conflict were felt in more concrete terms in art circles. Galleries were depleted and requisitioned for military and civilian use; the National Gallery had paintings removed and stored safely in Hastings, its staff being relegated to a small office space in the tearooms of the D.I.C. buildings.

Artists suffered in a very real way. Art materials were difficult to come by; shortage of petrol affected their travel; and in the case of Rita Angus, an unsympathetic Manpower Board conscripted her into a highly unsuitable war-job - something unthinkable to us, nurtured as we have been on the laissez-faire state.

In many respects the War opened a chink in New Zealand's artistic insularity and isolation. Russell Clark commented on his return that two years of full-time painting had completely upset his values. The concept of a professional New Zealand painter had become a possibility and a necessity. If the War did nothing else it gave artists the opportunities to travel and experience the European as well as other cultural traditions at first hand. Even though Austen Deans commented glumly that none of his 'overseas tricks' seemed to be relevant to New Zealand painting in the mid-'forties, he realised that he could not return to the artistic status quo of 1939.

The shocked reluctance of some local circles to come to terms with a more contemporary style is highlighted in the Canterbury Society of Arts's refusal, in 1948, to accept Frances Hodgkins's The Pleasure Garden - a piece of parochial philistinism that would recur almost a decade later with the Auckland City Art Gallery's Henry Moore Exhibition; and over their purchase of Barbara Hepworth's Torso II. A worried bastion of conservatism wrote to The Press: 'That Miss Hodgkins was sick at the time of painting is very obvious, for only a mind so ill at ease could see pumpkins floating in the air, apples with a brown halo on them, and Adam and Eve stretched out in a garden dressed in pink flanelette'. By 1949 the painting was safely housed in the collection of the Robert McDougall Art gallery. 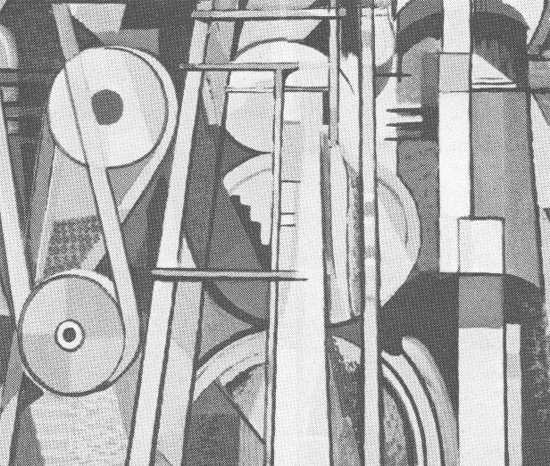 Although the role of the Arts Societies was an important one, their painters were hardly encouraged to be adventurous. In a 1942 exhibition at the Canterbury Society of Arts a critic seized upon two 'imaginative' works by Lois White, commenting that they 'helped to relieve the monotony of the large landscape section'.

With the gradual modernisation of the City Galleries, a new energy would be infused into the art scene. In the late 'forties and throughout the 'fifties the Auckland City Art Gallery was gradually transformed from a virtual mausoleum to a living part of a rapidly growing metropolis. Eric Westbrook was the man who took the Gallery out into the community; and Peter Tomory carried on his work, with the aim of creating 'a gallery which will pump a continuous transfusion of the vital blood of art into the community, enrich its spirit and imagination and provide it with an active set of totems for its own adaptations of European civilisation'.

Through the galleries came the many influential exhibitions of the 'fifties: including the 1958 show of British abstract painters which was to have such an effect on local artists. Together with this was the coming of age of art criticism in the writings of E. H. McCormick; and the growth of the various art schools such as Auckland's Elam, where A. J. C. Fisher carried the banner of tradition with his 'personal doctrine of instruction derived from his Gods-Leonardo, Titian and Rembrandt'. Paradoxically, it was Fisher who acknowledged the healthiness of the painting groups forming in Auckland and Christchurch, reacting against the stranglehold of the Arts Societies.

Brown's discussion of the paintings themselves moves through portraiture and landscape to the abstract paintings of the 'fifties. A full range of artists' work within the genre of the portrait is discussed - from the social comment of MacDiarmid's The Immigrant, through the shrewd psychological realisations of McCahon's Portrait of Victoria, to the symbolism of Rita Angus's Sun Goddess and Goddess of Mercy. Angus is characterised by her own description of herself: 'I am Colonial, several generations, and for me, New Zealand is, in essence, mediaeval'. One sees that this is apt when one looks at the Portrait of Betty Curnow, with its flattened planes and rich, bright colours that Tomory so aptly likened to embroidery.

You do not need to be a feminist to note how many of our finest painters have been women: and one quote would be guaranteed to make a hard-line devotee of the cause tear her Broadsheet to ribbons in a rage. Howard Wadman, writing of the Christchurch painter Ivy Fife, takes it upon himself to change the lady's gender - 'Surely we have a portraitist of the front rank in this I. G. Fife? I should be surprised to hear that better portraits than his Peter are often exhibited'. In Brown's book Fife is represented by the landscape The Long Lookout rather than a portrait, and the painting is beautifully described with an (alas) inaccurate quote from an earlier issue of Art New Zealand!

In the final discussion, the painters move right into the twentieth century, escaping from the 'smugness' that Rona Dyer found in the New Zealand art scene to a realisation of the potentialities of abstraction. Throughout, Brown points out the reluctance of New Zealand artists to dispense totally with figurative elements until Cordon Waiters, Milan Mrkusich and Don Peebles came to terms with a totally abstract approach.

In his introductory note to this volume, Gordon Brown is pessimistic about the feasibility of a follow-up study of the years 1960-1980. After such a perceptive analysis of the origins, either direct or indirect, of the painters of today, it would be a pity not to see the later painters too being placed in some kind of historical perspective.