When you are in the darkness of the thick of something, all you can do is reach towards those of its significants you can almost grasp, and make the most of them. To a large extent the photographs Peter Hannken put together for his April exhibition at Real Pictures looked like the record of the passage through such a place: the elements of Journey being there, though in no coherent sequence or sense. Indeed, as a clearheaded statement of the concerns made manifest in the images, the show fell short of success, probably because Hannken is still too close to the traces of the 'darkness' to have gained the coherence of hindsight. It is a sign of strength of purpose for any artist to be willing to work 'ahead' of him/herself, especially when that conviction of belief in images (which seem significant rather than being fully understood) is carried through to their exhibition. The price that is often paid for such an uncompromising attitude towards gaining the measure of something, is that the language can become badly articulated around the point it carries.

Hannken's exhibition looked a little like a case of 'all the words are here, now we have to get them in the right order' - something that seemed to have been accepted as inevitable by the artist. The apparent casualness in the way in which the images were arranged in the room is as much a part of this 'working in the thick of things' as is the attitude accorded his subjects, through the freshness of the chosen 'point of view'. Hannken always moves his camera off the rhumbline; moving in and around his subject to gain the aspect of its touch while effectively making it impossible, is something Hannken has always drawn out of his photographs: from the earlier Self Portrait series through to this Tree. With the throwing off of body that seems to be the subject of these photographs, 'touch' is something that ceases to be possible. Yet there is the parallel sense of submersion into a solid, supportive substance; an accompanying tactile saturation underlining a sense of longing.

On the boundary between object and sky are the 'beach flags', life-saving flags at Bethells Beach. Two triptychs and Two Beach Flags, a polaroid enlargement. Flags give voice to the form of sky, outline its tangibility; they are the visual recorders of forces moving within its mass. The slowness with which these flags stutter through this photographed sky, where each frame is silent and frozen, suggests that the atmosphere has collectively taken on the weight of matter, dissipated from the world of object. Sky and sea have the same degree of supportive fluidity; become one. In the more recent triptych, a figure moves into the sea through the frames and is cancelled out by the flags. 'Take me to the river, dip me in the water'(1): the notion of swimming the sea with body is equated to the swimming of sky without.

Two Beach Flags is a structure dedicated to the relief, not of life, but of weight ... the passage through, from our point of view, between these flagstaffs (which touch, and can only touch, through their flags) to the surf float waiting at the edge of the sea, is such a journey. Across the picture, brushing past the bases of the form that he is after. The subject, indeed, looks to be of secondary importance to this idea of aspect and context within which it is found.

First up is Egg and Teapot. Upfront, the egg rolls around on a white plate, with the big brown teapot brooding into the blackout behind. You want to take that egg and put it (crack M) into the dark fluidity of space inside the teapot, the same space that is already bearing-in-on the teapot itself. Inside-out and outside-in. While in the context of this single image such notions may seem to be stretching the information provided, the concerns thus introduced seem to lead on from that fundamental involution of matter. 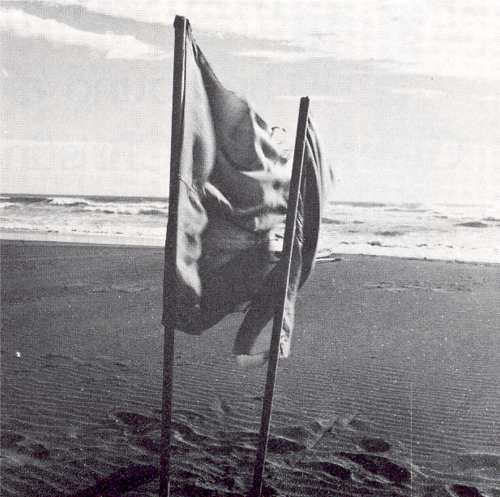 There is not much substance in these photographs: at least not in the formal sense. Looking around the room, you find that you are largely alone, that there are few people in the body of the work. Looking further, beyond the predominant lack of human form, there is a more general avoidance of object matter in any manifestation. Whole photographs of nothing but sky. We are walking in a world relieved of the weight of matter, a world we populate from these points of view. We are relaxed of body, under effect of an inversion of the force of gravity. Tree is one of the last vestiges of object, of body, left in this increasingly dense space; and it too is being cast off, taken away. The depth the photograph has put between us and that tree seems almost calculated to remove it just beyond touch, as though its objectness is dissipated into the supportive thickness of the space around it. The notion of inviting flagstaffs, go the footprints of people; this passage is in opposition to them; we leave no footprints. The emancipation of spirit on to a level footing perhaps.

There is a similar sense of the opposition of lives (or parts thereof) in City from Savage Memorial. Up here on a platform of land, out into the night sea and sky, the camera moves during exposure; drifting everything into one (almost) solid mass. City people's lives go on under the lights, unaware of this place.

Hannken did not keep the pictures of the night-time together, nor did he divide out those of Bethell's Beach from those of the city. What happened was that night inhabited the city, and the day the West Coast. After the night, there is re-incarnation into the new day; this one out on the other side. Perhaps these are the pictures of Heaven coming down to earth, for the Love of God. In the city night time, and on the West Coast, you are relieved of the 'outside' you are forced to live within at other times. Spirits can more than touch; they can mix and mingle.

Hannken's willingness to leave the openness of his working methods and motivation to show in the structure of his exhibition perhaps robbed us of a convincing show of fully realised and completely articulated photographs. More importantly, it provided the beginnings of a body of work that is yet to come. 'It's got nothing to do with you, if one can grasp it'(2) : it's a notion that tells you that you have a long way to go before you start to become aware of what this thing is that you have been reaching towards in the dark.