The grand theatricality of the view that the idea of sculpture as object is dead or obsolete had tended to obscure a more subtle distinction between sculptural objectivity and sculptural materiality - a distinction which can make greater sense of the difference between sculpture in the 'eighties and pre-modern work. For one of the primary concerns of the premodern sculptor - a concern which amounted almost to reverence - was the special character of such sculptural materials as stone, marble, or wood. The materials themselves were regarded as having a particular assertive force in the fabrication of a work.

This is no longer apparent as a feature of sculpture - even in the work of two New Zealand artists such as Marté Szirmay and Derek Ball, who may otherwise be regarded as contemporary traditionalists in that they both produce unitary objects. The fact is that in the work of both, the aim can be seen as the reduction of the materiality of their art to a point of evanescence by the use of peculiarly bland and highly malleable industrial materials. There is, as it were, no original physiognomy in Ball's plastics and acrylics; nor in Szirmay's polyester resin, the medium of her new work. For both, it might be said, the character of the art resides wholly in the omnipotence of artistic control over the mere stuffs - an omnipotence, and related assertion of the centrality of the artist rather than the object, which is in fact not so very far removed from the major premise of post-object thinking. 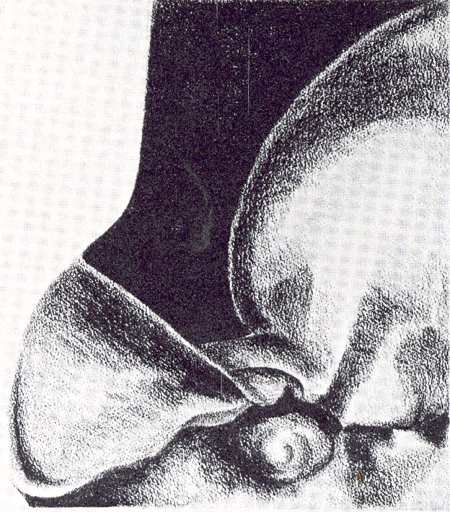 It is the use of these oddly immaterial materials which gives rise to a sense that the spectator is radically alienated from the works. The sculptures do not seem to participate at all in the actual spectatorial world, but suggest quite another in the insubstantiality of their presence, in their ultra-smooth surfaces and in their drained and homogeneous tones and textures.

Still, an important difference between the work of Derek Ball and Marté Szirmay's recent work in her exhibition Sculpture 81 at the Hocken Gallery is the apparent degree of contentment which each has with the new immateriality. While, in the end, both are essentially concerned with a kind of bodiless drawing in space, Szirmay is much more vulnerable to the kind of tension which immateriality can arouse. That is to say, unlike Ball, she is often brought to the point of defacing the immaculate blandness.

The clearest and most curious example of this attempt at defacement occurs with four of the eighteen (untitled) works of the exhibition in which running cracks are engraved into the otherwise flawless surface of the cast polyester resin - as if to retrieve it for a more natural world in which cracks do appear. Or, at another level, the artist seeks to provide the surfaces of her works with a textural elaboration through the use of black sand in the casting process.

The motive here - the attempt to retrieve something like a natural condition - may be apparent. But the effect is quite odd. Just because the material itself lacks an original physiognomy, it tends to throw off these defacements and elaborations. The cracks in no sense appear to be part of the object; and the ceramic-like texture of the black sand comes to seem like an unattached veneer.

Still, this is just to say that the image in Szirmay's sculptures is in the end resistant to any gesture, or counter-gesture of material embodiment. The works project, so to speak, as forms without a medium. And this is their real strength. For there is no doubt that, at best, Szirmay can achieve a wholly compelling dynamic in the sinuous sweep of line and curve - the primary intention which the eight accompanying working drawings in black crayon clearly reveal. 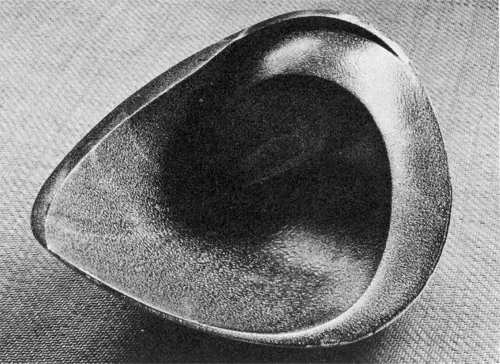 The scale of the new works has obviously been an issue for the artist - though in one sense the very immateriality of the mode belies any specific scale. In fact the eighteen works form two groups: the Series A sculptures, which are more or less table-top pieces; and the Series B sculptures which, just slightly larger in volume, are not yet sufficiently large to sit comfortably on the ground or floor.

Of the two, the Series B works have the more effective scale. The trouble with the smaller works is that their evident portability and touchability tend to work against their immaterial presence: they become mere things to be picked up and turned over in the hands. The larger works, by contrast, just escape that possibility - and in escaping it rather nicely reinforce their alienation from the spectator.

What remains the most serious difficulty, however, in working in this mode in which the sculptural materials themselves possess no residual character is that perfection comes too easily: the flawlessness of finish tends to overwhelm the vitality of conception. A case in point is one of the works from Series A: a stainless-steel coil embedded at an offset angle within a half-sphere in cast polyester resin. The essential dynamic of the work lies in the suggestion of the twisting force of a spinning top or gyroscope - the kind of force one can feel but not touch. But in the artistic rendering of that force, the object itself comes to have a bijou quality - the air of a sophisticated toy stamped out by the thousands.

It is at this point that it is possible to recognise the special virtue of earlier sculptural concerns with materiality. And some of the features of her new work suggest that Marté Szirmay has an equivocal attitude to this point of tradition. For where a sculptural material such as stone, for instance, has a definite character in the raw, it resists artistic omnipotence: stone cannot be cut or carved in just any way. But polyester resin has no such character and hence no such resistance. The price that the artist pays for the exercise of such omnipotence with such stuff is precisely the value the stuff has in industriaI manufacture - namely, its sheer malleability. However, it can then quickly seem that the artist is engaged in a form of fabrication which industrial machinery could as well achieve.