Before Rodney Fumpston's Sky Studies and Marble Arch etchings there was J.M.W. Turner, who saw the sky, the sea, the multitudinous images of the land itself through the variable translucency of the ever changeable atmosphere: veiled and sombre in the early dawn, sparkling crisp on a dewy morning, stirred to the whirling frenzy of a squall, vibrant and shimmering at high noon, calm and reflective with the stillness of summer haze, aglow with exaggerated hues as the sun slid beyond a darkening horizon, or in the pastel afterglow of a tranquil evening. 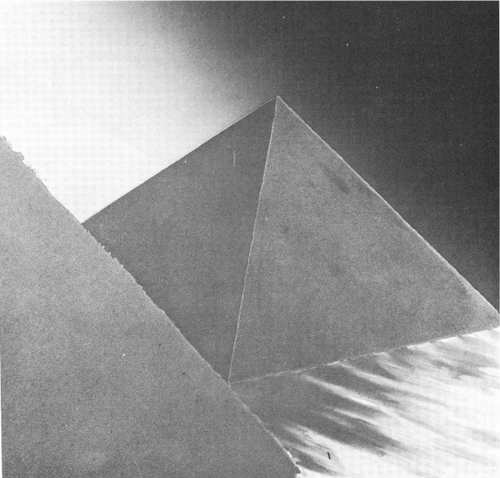 Turner was an artist who had been dead nearly a century at the time Rodney Fumpston was born. Fumpston saw Turner's work at the Tate Gallery when he was an art student in London during the mid-'seventies. In Turner he found an artist working in the area of risk on the border between representation and abstraction, yet transcending the limitations of each. He found the innovator of watercolours like Pink Sky (c 1825), with its strata of soft, luminous colour, Boats at Sea (c.1835-40), with its triple red-black calligraphic images ideographed, or the decisive brush-strokes of the Storm Clouds, Looking out to Sea (1845), or the schematic Colour Diagrams done sometime after 1824. This inspirational connection between the skilled simplicity of Turner's atmospheric colour rhapsodies and the subjective urge behind Fumpston's graphic techniques is an important clue in understanding an essential feature of Fumpston's artistic productions.

The dual connection is crucial. Fumpston's initial fascination with atmospheric light - in its colouration of the sky and in its effects on objects alike - of necessity needed to be seen in terms of, and find its equivalent through, the means of art. Sympathetic play is required between the observation of restricted but highly variable natural phenomena and its artificial representation through one of several graphic techniques. The technical means of these graphic media are also deliberately and skilfully restricted in range and method of application. In coupling a sophisticated subjective outlook with the simplest of technical means, the artist, by choice, enters an area of risk. What perpetuates the risk is the almost off-hand casualness - or rather the illusion of casualness - with which Fumpston applies his craft.

In such artistic territory the artist must tread warily along a narrow strip where representation and abstraction are combined with carefully-matched refinement. He cannot afford to stray too far either side of the self-restricted border area. To do so is to deviate either into an abstract diagram of the reality the artist wishes to convey, or into a situation where the images are emptied of their associational like with the reality they purport to represent. And if this occurs, they become little more than patterned marks or colour harmonies placed upon a pictorial surface.

To maintain such dual aspects of abstraction and representation in anything like equal proportions in a given work is no easy or simple task. It is a task that Rodney Fumpston manages well. However, there are occasions when the playing off of one factor against the other is not maintained with tolerable equilibrium. Because the refinements involved are delicate, the exact distance from the borderline separating success from failure is often difficult to ascertain. It is an area where opinions will differ. 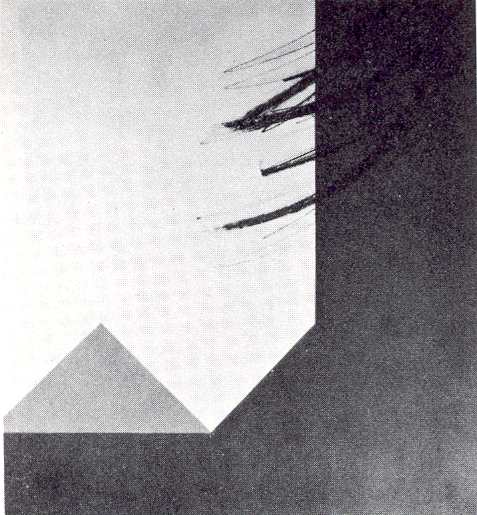 The fact that Fumpston tends to work in series does give an internal means towards assessment: but though this allows for relative judgements in the sense that one print or drawing can be more easily compared with its fellows, it still does not solve the quandary in the wider sense. Take the Shell series for example . . . prints in this instance removed from the 'atmospheric' criteria if not completely from the effects of light. The total integration of the series is inconclusive. While Yellow Shell seemed too literal, Blue Shell failed to escape the artificiality of the shape assigned by the artist to it, so that the generalized feeling required to realise what best represented that particular shell did not arise: while others in the series combined these two forces more harmoniously.

From another approach the Garden series also has bearing on the resolution of this dual equation. In this the inter-relationship between the drawings and the etchings were revealing in the sense that the manipulation of the sweeping linear patterns and colour patches (as typified in the print Garden View 4) were better able to create the allusion to foliage, sky or water than were the restricted means utilized in the drawings.

Michael Dunn's reservations concerning the drawings show less approval than mine: but his comments do point to the sensitivity of interpretation in the area of risk which affects the extent of our consent or disapproval. Dunn writes that '. . the drawings of gardens were marred to some extent by the repetition of certain hard gestures, suggestive of speed and creative ease, but a little dissatisfying in the end. Ultimately, the subject matter seemed merely an excuse to make drawings of a certain type so that the effect of grey, or grey-black tones, close together and very dense on the page, carried the main meaning'. There is truth in this assessment. However, Dunn has not been entirely appreciative of the implications surrounding the area of risk when he implies that the subject is 'merely an excuse' and not part of the creative substance underlying the reason for drawings.

It is possible to be misled by Fumpston's use of imagery as it relates to the subjective structure of his drawings, prints or collages. He can tease the viewer-as he did with the deceptive 'trompe l'oeil' technique of his Shell Collage 1. But behind the assured economy of technical means, behind the apparent casualness in the handling of images, behind the almost feminine seduction of his colour harmonies, there lurks the precision of a refined visualist who has a clear conception as to the artistic function of his images - even if occasionally this conception is not entirely realised in artistic terms.

Fumpston aims at an unusual degree of precision in his choice of imagery. This is just as true of his light-weight images as of his relatively substantial ones. Among the more ethereal images the sky-cloud images characteristic of the early etchings provide an obvious example. The precise manner in which the clouds are treated can be demonstrated: not just as shapes suggestive of clouds, but in their relative placement to the pictorial space created within the print. In Sky-Marble Arch 7 (see Art New Zealand 14; p.36) the relation of cloud shapes to the modulated sky colours is further enhanced by the tapering edges of the etched plate - from the width at the top of the print to the narrower dimension along its bottom edge. The mechanism behind this calculated device is an increase in the illusion of spacial depth in the print.

It is to the collages that one must turn to find the best insubstantial examples of the ethereal image. Here a note of irony enters, for, by the constructional nature of collage, the images are real if predominantly ephemeral objects. The tickets and labels gathered into his Package Holiday collages (see Art New Zealand 12; p.13), or his pyramid constructed from entry tickets to museums and mosques in Egypt-Dynasties, offer apt examples.

A characteristic equally applicable to both the substantial and insubstantial image categories is brevity: a style of brevity gaining as much from the definition as from the suggestibility of a specific image. Detail is minimal. Outline becomes the main conveyor of an image's substance, assisted to some extent by its colouration. In Fumpston's buildings (as seen in Locarno-Summer Holiday or Garden Evening 6) such details as windows or doors are non-existent. Images tend to be flatterned into generalized area where spatial relationships are indicated by the tonal control over 'atmospheric' colour: a process well demonstrated in the treatment of the pyramids in the acquatint Little Egypt 4. Sometimes the geometric nature of a structure is utilised to heighten the suggestion of three-dimensional form in viewing it from an oblique angle as in Egypt 6.

This print, in which the distant pyramid seems almost to grow out from, or balance on the edge of, the foreground pyramid, is a further example of Fumpston's visual playfulness. Such deliberate ambiguity, leaving open the possibility as to how an image might be read, occurs regularly in his work. It clearly happens in the triangular gable-roof structure of the building in Garden Evening 4.

But, rather than seeking examples among the prints or drawings, we can see the double-reading capability of his images most active in Fumpston's collages. A delightful example exists in the fragments of broken glass and crockery which are yachts sailing on the Waitemata Harbour in Shell Collage 3 (see Art New Zealand 15; p.16). Such ephemeral bits and pieces may in themselves be slight, but handled with visual delicacy they achieve a meaning beyond their trivial nature: at the same time exposing their latent visual qualities.

Admittedly, refinement of this sort is squarely in the area of risk. Without strict control over the potential enrichment of such trivial material there remains the danger, as Michael Dunn suggested, of such work sliding into 'tastefulness', with effects akin to 'expensive advertising'. Such a possibility is lessened in Fumpston's recent Egypt collages where the various materials assembled produce a denser visual effect. The change in emphasis has been brought about through a new source of discarded materials becoming available. The equilibrium between form and content typical of Fumpston's work is seen undergoing an adjustment; as is the restrained striving for technical perfection under stress as he copes with the new materials.

The visual appeal of Fumpston's work resides in the lightness of his aesthetic touch and the 'sensuous skin' quality he projects on to his work. His restraint in all this is given emphasis in the apparent casual bravura of his linear sweeps with etching needle or pencil. Here it is easy to stress his feeling for colour, for surface qualities, his fine attunement in the placement of his images: but these are often achieved at the expense of other aspects in this hard to define region. For all their abstracted simplicity, for all the subtleties of technique and nuances of colour and texture, his works are not so abstract that they exclude the play of a genuine feeling for the pictorial subjects that, supply the impetus behind his works.

Just because Fumpston operates in the area of risk, the emotional content of his work must also be held in check if the equilibrium of the various contributing forces is to be maintained. However, the emotional content is there. It is a content closely related to real situations. Without Fumpston's direct experience of the great pyramids of Egypt in 1980 the Egypt series would not have occurred. Nor would the evocative atmospheric skies of the Marble Arch series have happened without the revelation that accompanied his discovery of Turner at the Tate Gallery - let alone the course his art has followed since that revelation.