The artist's body becomes the subject and object of the action.
WILLOUGHBY SHARP

My performance was about the relationship between 'painting as an historical form' and 'being a person making those paintings. 'lt was a literal visual layering of these two aspects. The process of painting that is usually separated in many ways - painter from painting, execution from exhibition, and audience from artist - was brought together so that the whole process took place at one time.
CLAIRE FERGUSSON

The place: Franklin Furnace, New York; time: May 30, 1978. Called The Morris Louis Performance, it was her first. Having produced a series of slides and colour photographs documenting actions in which she painted her own body, usually in the style of some well-known painter, going live was the way to go. Part of that series (3-36) was shown at Real Pictures this July, along with the earlier One Tree series (39-50) which as a slide sequence had made up Claire Fergusson's first New Zealand exhibition, back in 1977 at Barry Lett Galleries. These two series do go together as examinations of the artist's body as an object of culture and nature. In the Paint Piece series there's some lovely lording it over art, although why the history of painting should be so reduced to a non-sequence of costumes doesn't come clear.

In that series Claire Fergusson puts on painting; in the other she wears nature. In Date Day she takes off and puts on her own clothes. With a pair of scissors, dressmaker-size, she began to cut off portions of her clothing, coating the exposed parts of her body with cold cream as she went. She became finally a screen on to which to project a slide of herself fully clothed, and the date: July 26, 1980.

Date Day was performed at Real Pictures on the 25th of July, 1981. The rest, the bulk of it, was a filling in, out, a seeing through of what was implicit in the opening minutes. Every day for the last year she'd evidently taken pictures of herself (clothed) which now were projected in order on to herself (naked) and on to the wall directly opposite. Meantime she addressed herself to herself and to us; what she wore would, or would not, jog her memory as to what happened to her on that day.

There was a cutting up of clothes which was a self-exposing, an excising of tell-traces of the social self and its replacement with a private somebody none of us knew, a neutral space, an empty canvas. Then, a filling in of that with details of a life lived over the preceding year. A present recovering, not really uncovering, a past.

But, as we watched a seemingly endless team of self-portraits in which Claire Fergusson stood expressionless, in the same frontal pose, as we followed the attempts to invest each image with something which spoke of her experience, a gap between image and word, between the person there and her body, clothed or naked, opened up. Here was somebody not even Claire Fergusson knew all that well - days went by and she could find nothing to say for herself. So a tension developed between our experience of the artist's body as subject and object. The success of the piece required the sustaining of that tension. 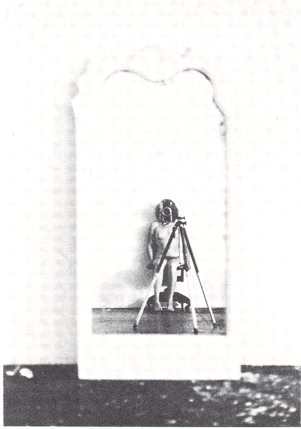 Leastways, that's how I saw it, and on the day the energy she needed to re-enter, recapture, those images of her past self, ebbed much more than it flowed. Too much of the time we got life-style rather than life, another set of surfaces, more clothes. What stays with me, however, is the effective evocation of the conditions for self-portraiture; it was the best of the three performance works I saw.

Performances are usually one-off events. In so far as Date Day was done here over a year after its original performance, it was a new work. Touring clearly presents problems for performance artists, and this was Claire Fergusson's first anywhere. Furthermore, she set herself a very demanding schedule. Aside from the lectures and workshops, she gave performances in Auckland (three times), New Plymouth, Palmerston North, Wellington, Christchurch and Nelson in a mere five weeks. There were versions of New York works and two new pieces: My Grandmother (100m2) and Y-Z (ANZART, Christchurch, and Bishop Suter). These last gained immediacy from being about recovering connection with New Zealand - her birthplace and home for the first ten years - but they did suffer somewhat from being worked out on the road.

Y-Z was a failure. Perhaps the special occasion of ANZART prompted this untypically didactic effort to bury New Zealand gentility of a generation back in the good indigenous earth. Y-Z was in any case overly busy, cluttered up with props and assistants; that it was drastically simplified for Nelson is not surprising.

My Grandmother had the greater presence. There before us we had the 79 year old Mrs Jessica, and the 30 year old Miss Claire Fergusson; and as the piece progressed, the filling in, out, of a gap. It was in three parts: Mrs Fergusson's reminiscences, a photographic 'session' and a 'slide show' of pictures of their two homes. It hovered uneasily between artifice and the lack of it; Mrs Fergusson's explanations of the family mementos handed to her by her grand-daughter were totally unaffected and were the highpoint. The photographic 'session' served as a performance frame for a startling projection of slide images of the two identically-dressed women one upon another. As with Date Day the slide superimposition was most effective. Because of their visual impact slides do, however, tend to upstage the performer and distract by evoking other places, other times, and in the last part grandmother and daughter simply receded from our picture. 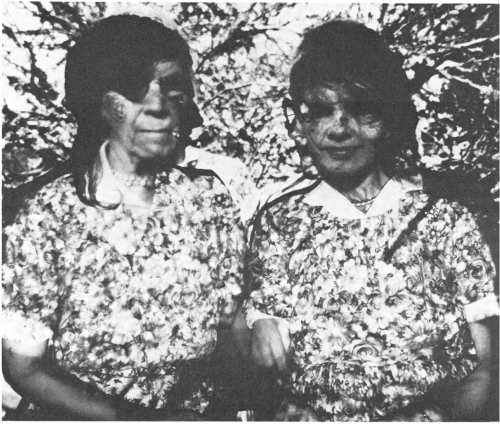 By being less bodyworks, by bringing in more, and more varied, information, both new pieces, lacked the focus and presence of Date Day. Elva Bett, reviewing the Woman's Gallery performance, wrote that the artist was not obsessed with a decadent abstract/concrete theology but used the human figure as motif for ideas that enriched and broadened'. The problem is that performances which end up trafficking in 'motifs for ideas' beat a retreat from presence back to re-presentation and illustration. It's clear to me that Claire Fegusson doesn't use the human figure; she presents, not any body, but her own body. There's an important difference. She doesn't use it, she presents, gives, it to her work.