Victoria Arcade Some Auckland Painters of the Fin de Siècle

When in 1978 the Victoria Arcade building was pulled down by The Bank of New Zealand, one or two architects and art historians raised their voices in protest. None of this deterred the Bank from demolishing one of Auckland's most valuable cultural landmarks and replacing it with a modern building of no particular character. Today, shoppers crowd on a street corner where all traces of an earlier period have been brutally expunged and I suppose nobody really cares to remember the more leisurely values of the past. 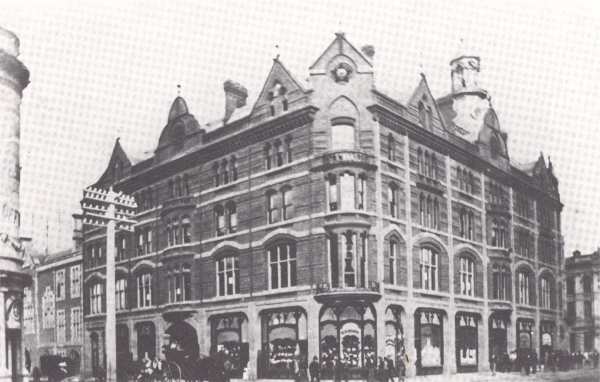 What was realised by few, perhaps, is that Victoria Arcade-quite apart from any aesthetic merits it may have as a piece of Victorian architecture - was a very tangible link with a whole past era of art in Auckland: a period stretching from the mid-eighteen-eighties through to the early decades of the new century. A roll-call of painters who had studios at the Arcade would include the names of Frank and Waiter Wright, Robert Atkinson, Charles Blomfield, E. W. Payton, Kennett Watkins, Louis John Steele and G. C. Goldie, And a bird of more exotic plumage, Girolarno Pieri Nerli, seems to have made a stay there, albeit a brief one. The list reads like a litany of the most notable artists of the period. While there were other buildings with artists' studios (Palmerston Buildings, for instance) there was not one that had so long an association with art in Auckland. In addition, Victoria Arcade, from the mid-thirties, was to house the Auckland Society of Arts itself, after the ill-considered, and later much regretted, sale of its own building in Kitchener Street.

Designed by Alfred Smith in 1885, Victoria Arcade must surely have been one of the most striking and 'artistic' buildings in late-nineteenth-century Auckland. (It is given a prominent section in the pages of the Cyclopaedia of New Zealand that deal with the city's important pieces of architecture as they stood at that date). An early photograph, dated c1886, taken soon after the building was put up, before the street verandah roof was added in the 'nineties, gives a good impression of the exterior of the building at that time.

To further aid us in calling up fin de siècle Auckland in our imagination we can look at some other photographs taken in the summer of 1903 from the intersection of Wellesley and Queen Streets. (Auckland Public Library Photographic Collection.) The one reproduced here looks to the east up the hill to the Art Gallery and library building. (It was taken at exactly twenty past four in the afternoon as we can tell by the clock in the library tower.) 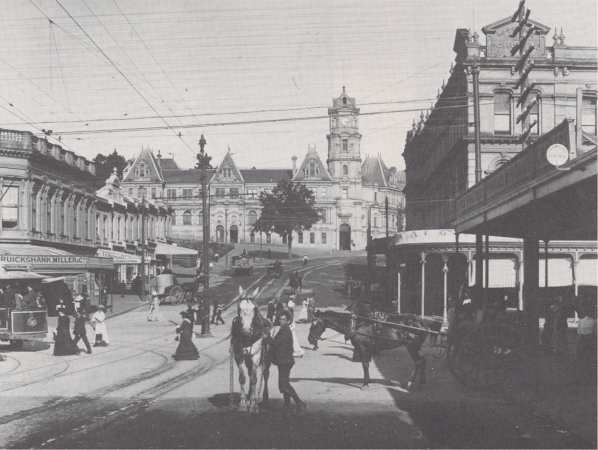 The Auckland City
Art Gallery
and old Public Library
from the vicinity
of the
Queen Street,
Wellesley Street
intersection,
February 1903

And we can find our way, as it were, further round the city of the past by contemplating a 1905 photograph that shows another relevant landmark - the clubrooms and gallery of The Auckland Society of Arts: which then stood almost opposite the Art Gallery, a little further up Kitchener Street. (The view is taken north-east from the vicinity of the present Lorne Street-Wellesley Street intersection.)

The first Auckland artists to take studios in Victoria Arcade seem to have been Robert Atkinson, Charles Blomfield and Louis John Steele; and they must have become tenants very soon after the building opened. All these artists exhibited with The Auckland Society of Arts, so that their movements, as well as their principal works, can be traced through the catalogues of the Society's annual exhibitions. The Society's catalogue for 1887 lists all three named above, among their working members, as having studios at the Arcade.

The Auckland Society of Arts, founded in 1880, had grown out of the earlier Society of Artists, whose foundation members had included Albin Martin and J. B. C. Hoyte and The Reverend John Kinder. 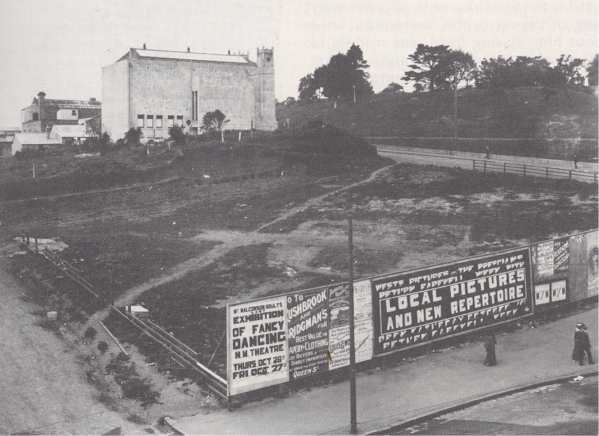 The Auckland
Society of Arts Gallery
from the vicinity of
the Lorne Street/
Wellesley Street
intersection, 1905

In the 1887 annual exhibition of The Auckland Society of Arts the work of all these artists was to be seen - as well as that of E. A. Cifford, E. W. Payton, A. Aldi and E. Kate Sperry. By 1887 the Society was installed in a room in the Art Gallery and Public Library building in Wellesley Street.

Robert Atkinson came to New Zealand from England in 1885, it seems mainly for the sake of his health (he may have been tubercular). He was to stay in Auckland for five years before moving to Sydney where he died in 1896. As I said, he was installed in a studio in Victoria Arcade in 1887 (the Society of Arts catalogue for 1886 gives his address as 'Melbourne Cottage, Day St.'). A photograph of about this time shows the artist in his early twenties, at the easel, perhaps in his Victoria Arcade studio, and with his portrait of the painter Albin Martin visible in the background.

Albin Martin was a charismatic figure in the early artistic life of the Colony. He had been a pupil in England of the painter John Linnell, who was the friend and patron of William Blake. Linnell's chalk drawing of Albin Martin as a young man of twenty-two is in the Collection of The Auckland City Art Gallery. 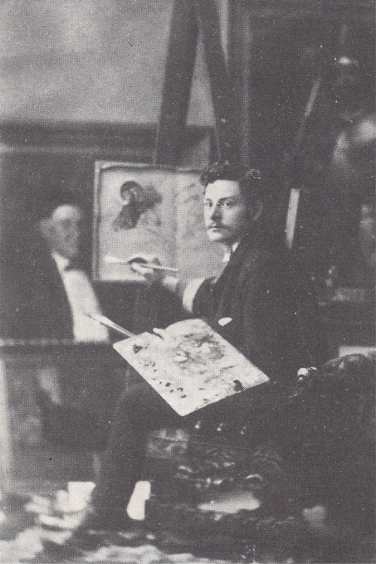 Robert Atkinson in his studio
circa 1887

Atkinson probably had an introduction to Martin from English connexions. At any rate they became friends in these years and Atkinson painted the portrait at Martin's house in Ellerslie in 1888. Atkinson's portrait of the elderly Albin Martin makes an interesting contrast with Linneil's elegant drawing of fifty-three years before.

Surviving pictures by Atkinson are few and far between. In the lithographic sketches which serve as illustrations to The Society of Arts's 1887 catalogue there are two of his works with figures - Evicted and Sunshine - as well as what looks to have been an interesting and attractive landscape with figures, A Hot Day on the Waitemata. All these paintings appear to have vanished without trace.

One of the other early tenants at the Arcade, Louis John Steele, had probably only just arrived in Auckland when it opened (it is thought that he came here without his wife or son, in 1886). He was possibly the first to come here with something of the air of the 'Bohemian' artist about him, having lived and studied in Paris, and apparently been there during the heady days of the Commune of 1871. 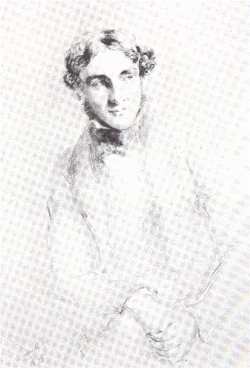 From the year of his establishment at Victoria Arcade, Steele exhibited regularly at The Auckland Society of Arts: narrative paintings and portraits. Reviewers of exhibitions had the habit of referring to Steele in such terms as 'the Meissonier of Maoriland'. As is well known, he was a teacher of Goldie: the two of them collaborated in the painting The Arrival of the Maori (Auckland City Art Gallery): completed soon after the younger man arrived back from his studies in Paris.

In Una Platts's catalogue to The Auckland City Art Gallery's 1955 exhibition, Early Identities, are transcribed some evocative memories from contemporaries of Steele . . . '[The son of a fellow artist] remembers strolling down Carlton Gore Road on summer evenings to a nurseryman's garden, and sitting there under the trees with older boys and young men and listening while they coaxed Mr Steele into telling them of his Parisian adventures at the time of the seige. From still another friend we catch glimpses of him dodging bullets in the streets of Paris, and being able, quite by chance, to wave good-bye to an emperor setting off on his journey of exile to England.'

From the same catalogue of Ms Platts we get a memory picture of Steele of that period (of about the same time that his self-portrait was painted): 'He was somewhat of a dandy-a dandy of the Left Bank maybe-with a dark velveteen coat, fawn fine-corded velvet trousers, and wearing a heavy gold fob. As he walked up Queen Street, people would turn to look at him. He was clearly an artist, or somebody special.'

Exhibiting for the first time with the Auckland Society of Arts in 1897, G. P. Nerli is listed in the catalogue simply as 'Signior Nerli, Auckland'. That year he showed six oils and a watercolour. By the time of the 1898 catalogue he is listed as 'Signor Nerli, Victoria Arcade'.

Nerli had come to Auckland in 1897 from Dunedin, where he had been the teacher of Frances Hodgkins. In Auckland he was the recipient of a number of commissions. The Nerli painting, Lady in Green, in the Collection of The Auckland City Art Gallery, which was shown in the Early Identities exhibition, seems to correspond with the following contemporary newspaper comments: '. . . an Auckland lady whose friends need not to be told that her portrait is hung in the exhibition to recognise her face again on the canvas . . .' ' . . the expression of the eyes wonderfully good, not only wonderfully good but wonderfully true.'

In the 1898 exhibition, however, Nerli showed no works. Perhaps by then he had moved on, returning to Italy with his new wife. He died in Nervi near Genoa. 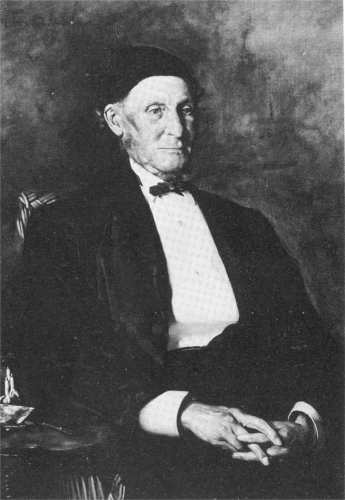 Two other notable painters to have studios at Victoria Arcade in the 'nineties were the Wright brothers.

Frank and Walter Wright had come to New Zealand from England in 1877 and settled in Auckland. Frank was then seventeen years old and Walter eleven. Frank Wright was exhibiting with The Auckland Society of Arts by 1885; Walter Wright by 1889.

Again from the evidence of studio addresses given in the lists of working members in the Auckland Society of Art catalogues, we know that the Wrights were at Victoria Arcade by 1896 (before that their address is given as at Ponsonby). By then, Frank was on the committee of The Auckland Society of Arts and evidently a figure of some weight in the cultural life of the city.

Five years later, The New Zealand Graphic (issue for October 26, 1901) carried illustrations of the studios (presumably in Victoria Arcade, though it does not say so) of Goldie, Steele, Frank Wright, Kennett Watkins and E. W. Payton. The photo-Iithography of this early period of the illustrated magazine is rather 'too primitive for satisfactory reproduction here: however the interested reader can consult file copies of the journal in the libraries.

Frank and Walter Wright both taught in 'Wrights' Studio' in the Arcade, and the photograph in the Graphic shows rows of young ladies in straw boaters diligently attending to their canvases. 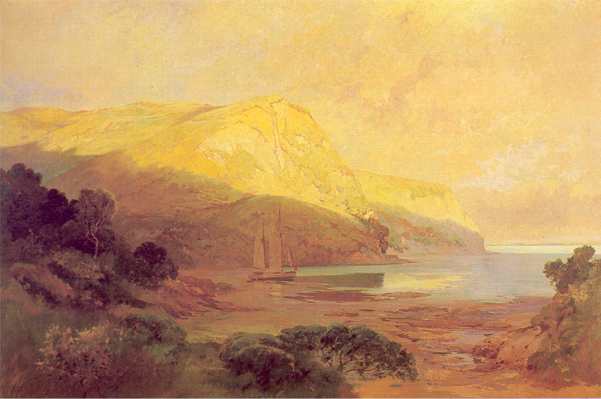 In her catalogue to the Frank and Walter Wright exhibition (Auckland City Art Gallery, 1954) Una Platts records that young ladies were brought over from private schools in Remuera, Parnell, Mount Eden, and even from the North Shore, to work in the brothers' Victoria Arcade studio, where each had his own group of students.

Frank and Walter Wright both exhibited many of their own works - oils and watercolours - at The Auckland Society of Arts over the years: from 1885 through to the 'twenties of this century.

The Last Gleam, reproduced here (from the Collection of The Auckland City Art Gallery) is an oil painting of Frank Wright's maturity, first shown at the Society's 1912 exhibition.

In writing this sketch of some of the figures in the art circles of late nineteenth and early twentieth century Auckland, I am indebted to suggestions by Ms Una Platts. A full evaluation remains to be made of what proves to be a surprisingly rich fabric interwoven between art and social history, with enough material to make. up a book in itself.