The 1970s saw two main advances in the field of art administration. The first of these was the establishment of the Queen Elizabeth II Arts Council on a credible financial basis. The second was the development of professional public art galleries in the provincial centres, principally, but not exclusively, in the North Island. 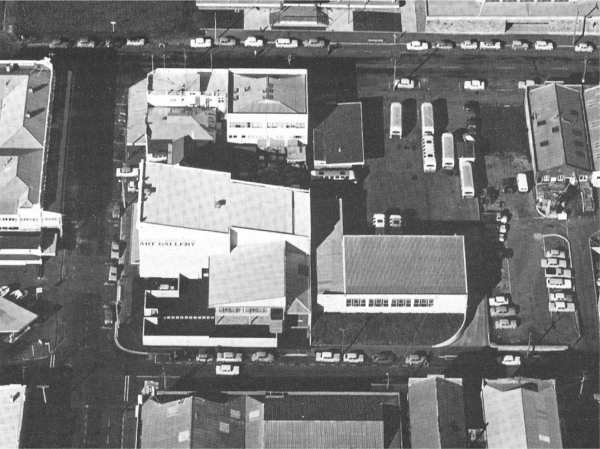 In some cases this development was based on an existing facility with an established collection of fine art. This gave such galleries a head start in terms of initial capital outlay but led to special problems involving the disruption of their traditional links with the community. it also led to difficulties in developing a coherent collecting policy around an often haphazard and unsystematic collection.

The Govett-Brewster Art Gallery in New Plymouth, finally opened in 1970, had the advantage of a considerable capital sum for establishment purposes without it being tied to any restrictive conventions. It was this initial freedom that allowed the first Director, John Maynard, appointed in 1967, to formulate a written policy that founded the Govett-Brewster as a contemporary gallery with a professional administration. 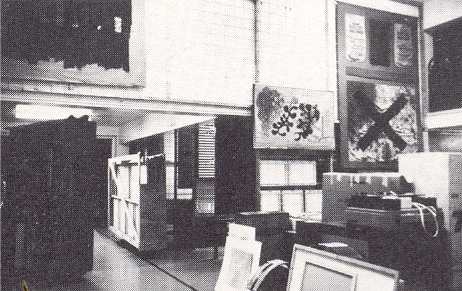 Painting storage
at the Govett-Brewster

The contemporary aim was written into the collection policy adopted in 1968. Works of art considered for purchase were to be, 'representative of contemporary ideas and significant of contemporary forms', from the Pacific Basin, with the 'emphasis being placed on the acquisition of contemporary works of art executed by New Zealand artists'. This established the Govett-Brewster as an innovative gallery that lay aside its art museum pretensions to foster the development of New Zealand art. It was a unique experiment and one that no other public gallery has attempted to emulate. However, the Gallery's subsequent history did not fully realize this policy aim; and while the achievement has been considerable, the experience does not differ substantially from a number of similar provincial galleries.

There were two important administrative powers incorporated into the trust deed that assisted the Director to implement the original policy. The first of these was the power to de-accession works purchased after five years. The original intention was to develop a collection that was fluid: i.e., works would be purchased, held for a period, and then sold. In so doing it would always be representative of contemporary art. 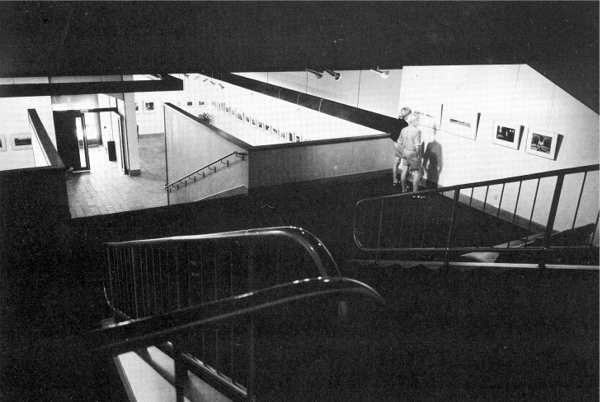 Inside the
Govett-Brewster
Art Gallery,
looking toward the
main entrance

There has been no systematic use of this power, except to rid the collection of works of inferior quality acquired outside the collection policy. That such works were acquired at all gives an indication of the shadow that fails between dream and realization: a shadow that another director, Ron O'Reilly, recognised in 1978 when he intimated that he 'should like to see policy widened so as to enable us to buy ... older New Zealand Works that would set our contemporary ones in perspective'. Such works - a fine T.A. McCormack landscape for example - have been acquired.

Yet the perceived role of public art galleries is constantly changing. The new emphasis is on community involvement, on education and on extension activities. The idealism given practical force in the founding of the Govett-Brewster was a product of a time when it was of central importance to establish professionalism in art administration. The rule of the amateur had been long, enthusiastic, and characterized by an appalling squandering of resources. A clean break had to be made, and it was marked, especially in the provincial centres, by considerable acrimony. The art societies, nineteenth century cradles of New Zealand art, were locked out of the new galleries and a troubled and uncomprehending public confronted with the uncompromising experience of contemporary art. There was little effort to bridge the communication gap.

Maynard protected this jealously guarded professionalism by incorporating into the policy a clause providing that in any dispute between the gallery and its city council the Director had the right of appeal to an arbitration committee comprised of the directors of the galleries of the four main centres. Despite this power, changes have occurred at the Govett-Brewster which have been, in part, the result of a formidable and conservative political pressure. But paradoxically, there is also a growing confidence on the part of the professional and an awareness that activities designed to involve the public and the local artist do not necessarily signal a retreat from hard-won ground. Public consciousness tends to become broader and the standard of local art to be raised.

Taranaki Review, an annual exhibition inaugurated at the Govett-Brewster in 1974 after considerable negotiation, represented the first step in this direction, as well as the first substantial alteration to the gallery's contemporary idealism. Local artists and craftsmen were invited to submit work for an exhibition of regional art. The selection of the work was done by a chosen panel of professionals, and in controlling the selection of the panel the Director ensured that as high a standard as possible was maintained. Inclusion in the exhibition therefore enhanced the reputation of the artist chosen without discouraging the amateur from submitting work. 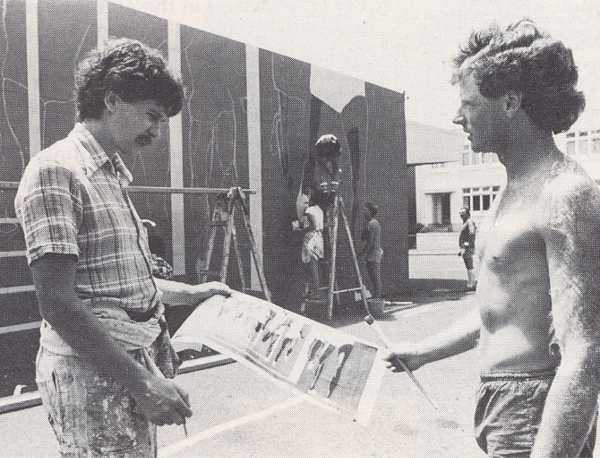 The show remains popular, averaging six to seven hundred entrants of which seventy are selected. Dick Bett, the current Director, concerned to add purpose and direction to the exhibition in order to achieve a better quality has introduced three changes. He has limited the exhibition to one art discipline a year (in 1980 it was crafts) and invited guest exhibitors whose work supplements the selected works. He has also obtained sponsorship which has allowed him to offer $3000 worth of prize money.

It is this adding of 'purpose and direction' that underlines the Govett-Brewster's evolving educational and community role-a role that Bett supports and promotes with an exhibition and activities programme designed to bring as wide a cross section of the community as possible into the gallery. Sport of Kings, an exhibition of paintings of racehorses, had wide appeal with punters. Carnival of the Animals was aimed at a family audience, while Stations of the Cross, shown through to Easter 1981, exposed New Plymouth to a broad and controversial range of religious art. An active school holiday programme is run for children, and regular cultural activities involving classical and contemporary music, modern dance, theatre and poetry add support to this broadened gallery base. 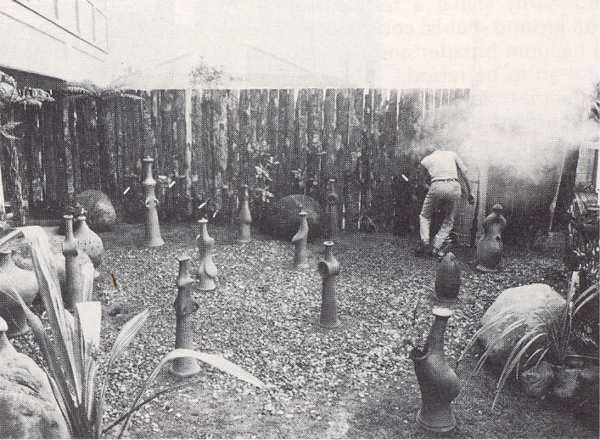 Despite this 'retreat from Maynardism' elements of the original policy remain intact. The main thrust of the collection is contemporary and the eighty works purchased in the eighteen months since Bett assumed control are all less than ten years old. They constitute a valuable rounding out of what is now a permanent collection. The emphasis remains on New Zealand art, with the works from other countries providing an interesting but unsustained sidelight.

It is also the intention of the Director to reserve a section of his exhibition programme for the active promotion of younger artists still in their twenties who have yet to establish their reputations. Bett's comment that 'we're not so much an art museum as art entrepreneurs', echoes original policy as well as his own previous dealer gallery experience. This promotional role is also evident in the housing of the Len Lye collection at the gallery. Although only indirectly involved in the administration of Lye's residual works (a trust board assumes that responsibility) the gallery has committed a large proportion of its space to storage of the work. More importantly, it has played a major role in promoting Lye's reputation in New Zealand. The Gallery's commitment to this artist has its origin in 1968 policy: policy that contained the clear implication that the gallery should not avoid controversial judgements. it thereby retains the capacity to generate excitement in contemporary art. 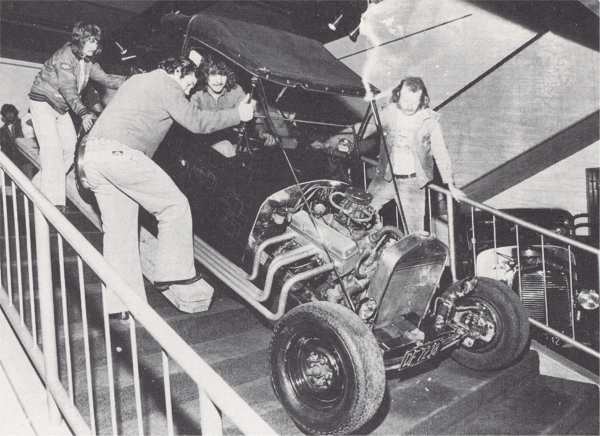 The highlights of the forthcoming exhibition programme underline the balance that has been struck between these contemporary concerns and the wider, more traditional art gallery role. Frame of Reference, a show of the work of contemporary Australian photographers, that the gallery has assumed responsibility for touring, fits comfortably into the contemporary and Pacific Basin area. It promises to be a fruitful extension of the developing link with Australian art. The Parihaka Centennial later this year will be observed by an exhibition of work on the theme by invited artists. It is a centennial that a Taranaki gallery could hardly ignore: but it is an event that will have to be handled with considerable professional skill.

Perhaps the most significant exhibition that the Govett Brewster will be associated with, however, will be an exhibition of Maori art currently being curated by Ron O'Reilly. For the first time Maori art will be taken from the hands of the museums and ethnologists and subjected to serious critical appraisal. It is a controversial move on the part of the Gallery, who hope to tour the exhibition nationally: but one that demonstrates that, while the Govett-Brewster no longer retains its unique contemporary status, it is still capable of making an important response to art in New Zealand. 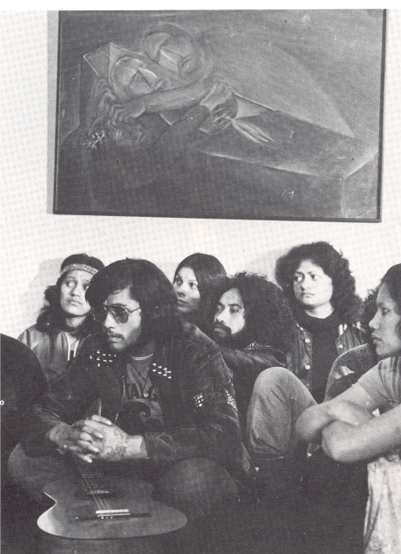