Jeffrey Harris's exhibition was really two exhibitions - a variety of works, a mini-retrospective of biro, pencil, and ink drawings from the 'seventies; and sixteen larger drawings from 1980 to 1981 with a more centralised thematic focus - If Loving You is Wrong. . .  - the title of the series. 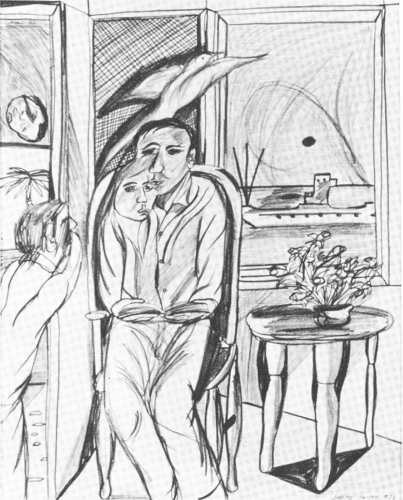 The expression of extreme passion, the outpouring of ambivalent, tortured, even violent emotion was common to both groups of images. The picture-space in Harris's work becomes, so it would seem, an arena for 'confession' and/or the exorcism of demons.

The 'seventies drawings include portraits and self portraits (e.g. Self-Portrait on Cross), figures in landscapes, dream-like, 'surreal' concoctions with bizarre and 'irrational' relationships, and images which look like ghastly parodies of comic strip (Battle Pictures) material with titles such as Sex and War and Certified Insane. Harris's faces are tense, anxious, tired and suspicious - echoing Edvard Munch, Ludwig Kirchner and other late nineteenth and early twentieth century so-called Expressionist artists. The shapes of his figures are sharp, jagged, and jerky. Ambiguous birds, flame-like shapes, severed limbs and heads, and floating figures recur. The 'world' of the drawings is shaky, constantly shifting, difficult to grasp, threatening.

In Fear is the Mother of Violence, for instance, a bird-headed figure hunches over a desk, as a homunculus arises from the pages of a book; while Pride and Hope presents a multi-figure, 'spaceless' mosaic of failing ladders and dishes, broken spiked wheels, knives, cut-off anatomical parts, burning candies, dagger-like fingers, and 'desperate' expressions. And in the higher realms of the macabre Public Hellman features a ghoul cannibalising a tiny human (memories of Goya's 'black' painting, Saturn Devouring his Children) accompanied by a headless beast stalking the landscape with a head on a stake and aerial explosions. 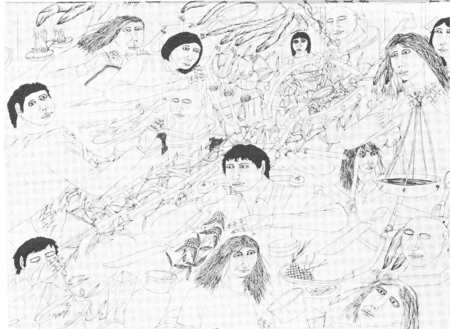 This is 'nasty stuff', which easily could have fallen flat or seemed corny: but Harris's thin, wiry, spare black line, 'scoured' into the white of the paper, usually had the necessary tension and urgency for the best of the images to succeed - as expressive arrangements of line and shape; not simply as illustrations of some private mind-state.

Long-beaked birds, suspended figures, severed heads, cross shapes, figures starkly set in landscapes, angularities of gesture and body shape play prominent roles in the sixteen If Loving You is Wrong . . . drawings too. The line, however, is thicker, less precise in the definition of shape and form than in the earlier drawings. The introduction of areas of colour and the frequent use of words also, be. side the difference in scale, serve to distinguish the 'eighties from the 'seventies work. Line and shape 'clash' more in the 'eighties; the arrangements are more dizzying and scrawled, as if the drawings,' were produced more 'in the heat of the moment' than the more 'calculated' 'seventies work Of, course they might not have been. Rather, that could have been the effect that Harris was striving for.

Pain and hurt in love, guilt, recrimination, anger, fear are the stuff of If Loving You is Wrong. . . The drawings could almost blown-up pages from an illustrated diary or letters. Consider this sample of utterances: 'Where is your integrity, Jeffrey'(from The Voyage Out); 'I'm too scared to do what I want to do ... I'm too scared to ask you to help me any longer' (from Punk, Punk, Punk); 'Your Private Life, Jeffrey, Leave me out' (from Out, Out, Out).

This might not be to everyone's taste, even if in terms of the 'Expressionist' aesthetic many of Harris's images are effective.

The twenty-one works on paper and six large paintings, in mixed media on cotton duck had a common theme - the varying attitudes to the land in New Zealand: as exemplified by the 'meanings' and/or uses the mountain of Rakaumangamanga in the Bay of Islands has had for Maori and Pakeha. For the local Maoris the mountain is much venerated - a site primarily important for its spiritual and mythological significance; whereas among Europeans it has been apprehended primarily either on an 'aesthetic' level - simply as an impressive 'sight' - or on a 'scientific' level-in terms of its geographical coordinates, as the location of a trigonometric station. Rakaumangamanga then becomes a thing to be measured, notated, tailored to a European conception of order, in which, by implication, the mountain's spiritual import for the Maori is controlled and tamed. 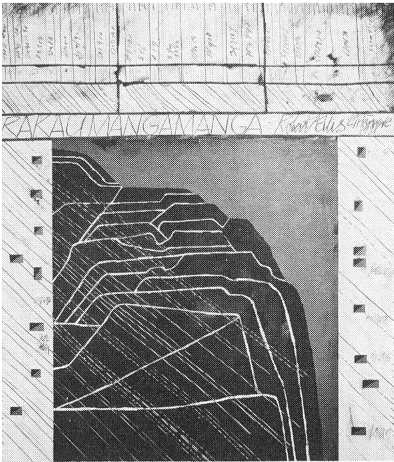 Ellis's images include both views of the mountain. It is so shaped - towering, stark against the sky, severe, 'awesome' - and coloured - mostly dense dark greens and reds, blacks, deep yellows - to suggest its emotive and spiritual 'force'; yet it is also numbered, sectioned, ruled, and lined to indicate the attention geographers have subjected it to. The big paintings include the name too - RAKAUMANGAMANGA in large letters - either an incantation, as if the name itself was invested with magical properties, or a diagram label.

The various elements in the works, contrasting, working against one another, give most of the images the tension and 'distance' necessary for them to operate both as stimuli to thought about the ways New Zealanders view the land, and as interesting visual objects in their own right. Ellis does not sentimentalise; nor does he indulge in the expressionistic 'my heart and soul for everyone to see' pseudo-earth mysticism that has been a popular current among some Pakeha artists in New Zealand. He has realised his intentions much more successfully than most other painters of landscape motifs working here today. 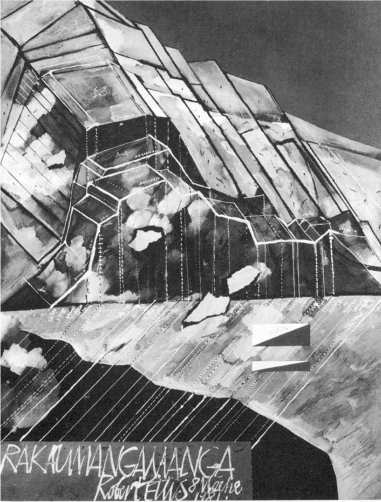 Geoff Thornley's first exhibition for two years comprised seven large works, oil on canvas, all untitied, except for a Diptych. All the paintings are shaped - either quadrilateral's with the lower horizontal edge a few centimetres longer than the upper, or near-rectangles - except that there were angled 'cut-offs' of several centimetres at each corner. Each canvas is monochrome - a grey-white, two blues, a red, a scarlet, a lime green, and a maroon and orange (of Diptych) - but for a diagonally, or not quite diagonally, disposed cross (St Andrews), from corner (or nearly so) to corner in the form of a taped incision, about 2 to 4 cm wide, in the canvas, sometimes grey, sometimes lined black on grey, once a yellow-orange (against scarlet). The paint surfaces are dense-layers of pigment applied thick and viscous; yet, as is usually the case in Thornley's work, the brushwork elegant in a restrained and understated way.

Thornley sticks to the 'facts' - of materials, and in terms of shape colour, and paint application. But for the rich, at times almost decorative, colour, this 'factualism', along with the reductionism and the absence of any overt 'emotionalism' (with apologies for -isms) may seem to point to a puritanically severe approach to painting. The best pieces, however, manifest an exemplary care and attention to the business of painting. For instance, Untitled No. 17, whitish grey on whitish grey, the most minimal, is 'tough' and cerebral, yet bespeaks a subtle tenderness, sensuousness even.

Thornley's paintings are not 'easy'. He perhaps walks a fine line in terms of whether or not he successfully establishes a 'presence' for these theoretically self-contained visual objects. For me some worked, some didn't.