As tastes change, and as artistic reassessments are made, the fortunes of painters rise and fall. With Frances Hodgkins this has been very much the case. At the time of her death in 1947, her reputation reached a peak when British writers, such as John Piper, were lavish in her praise. Shortly after that Dr Eric McCormick published his fine book, The Expatriate (in 1954), where by concentrating on the letters of Frances Hodgkins he analysed her attitudes as a New Zealander painting in Europe. Since then her reputation in New Zealand has been secure, even though a proper reassessment of her art is yet to come in England.

In his new book on Frances Hodgkins Dr McCormick does not attempt an evaluation of the art of the painter: instead he extends the range of material he used in The Expatriate to give a fuller social and pictorial context for her life and art. Appropriately he has chosen the title Portrait of Frances Hodgkins for his new publication.

For most readers the outstanding feature of the book will be its illustrations. This may come as a surprise to those familiar with the author's previous works, where the text is very much the dominant element, even in his books about artists. This is in no way to play down the quality of the writing, which remains, as always with Dr McCormick, a pleasure to read. Rather, it is a tribute to his success in compiling visual documentation to supplement his written sources. It was obviously the task of many years to gather the varied range of images reproduced here. In the first twenty or so pages alone we see historic photos of Frances Hodgkins's father, William Hodgkins - also a painter - of her mother, of her friends and of the artist herself both as a child and young woman in Dunedin. 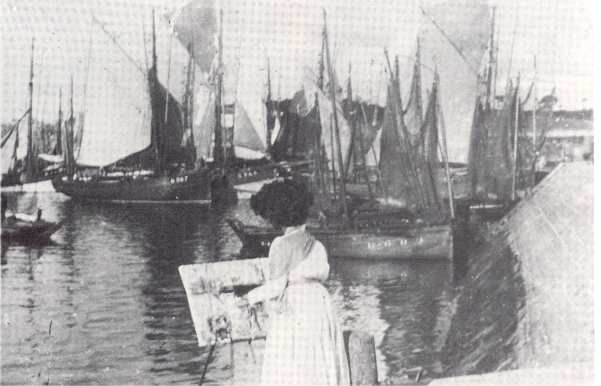 The author's portrait of Frances continues in this way, page after fascinating page. Some of the photos, such as the one of 'Frances in exuberant mood at Rijsocird in the summer of 1903', convey the energy and enthusiasm of the young artist more vividly than words alone can do. Extracts from letters illustrated with her sketches, exhibition catalogues, and even Frances's cycle club membership card of 1902 are but a few of the visual resources Dr McCormick collages together. Leafing through the book is reminiscent of glancing at a family album: so intimate is our introduction to the subject. For example, we find, in the later pages, photographs of Frances taken after the Second World War: photographs ' . . . she suppressed at the time . . .' which show her frail physically but still full of concentration on her art.

Each illustration has a short caption designed to supply exactly the right amount of information needed to pass from one plate to another without hunting in the text itself for the relevant facts. The author gives names and places crisply, and uses quotations from letters to add a personal quality to the notes. Here and there among the captions, he makes useful connections between paintings and sources: such as that on page 28 where he links the style of an early Hodgkins pastel, Native Girl c. 1896, with that of her teacher, the Italian Girolamo Nerli. In another, he shows her sense of humour in parodying a picture by Luke Fildes called The Casuals by depicting hens in a huddled line instead of the tragic figures, Homeless and Hungry, found in the English Royal Academician's canvas.

The text provides a biographical account of the painter's career set out in chronological order. Quotations from her letters, from newspapers, magazine reviews and catalogues inject a feeling of authenticity into the portrait. We discover details about the painter's life that are in themselves unspectacular but valuable for revealing her character; for example, her reluctance to be photographed because she thought she was plain; an engagement to a Mr T. W. B. Wilby that promised much but came to nothing; and overwhelmingly her desire to be independent - not beholden to any school as she put it after leaving the Seven and Five group of artists.

Dr McCormick notes that 'Frances did not often comment on works of art, her own or other people's.' While this is in keeping with her non-theoretical nature, it does create problems for the reader who would like to know more about her attitudes to the painting of her contemporaries in France and Britain, especially from the 'twenties on. That she was alert to developments in art, even if reticent in talking about them, is indicated by her response to surrealism, for example, which the author mentions in connection with her paintings of about 1930. However, he does not offer any analysis of individual works in support of such relationships. This is a pity, in my view, since the works themselves provide an important amount of information additional to the documentation Dir McCormick has so scrupulously compiled.

Apart from one or two minor proof-reading errors which one notes with surprise have slipped into text and captions, (e.g. the date of The Hill-Top page 80) and the bleached-out colour of Babette, (reproduced on page 57) the book is well-produced. It represents excellent value and will undoubtedly carry the author's knowledge and love of his subject to a new generation of readers unfamiliar with The Expatriate.