Christabel and Joe Wylie have in common as artists a predilection for fantasy and humour. The fun in their work is a refreshing change from the attitude that art has to be wrenched from existential angst.

Since their marriage Christabel and Joe have focussed their creativity on earning their livings, at the same time, gradually emerging as highly original artists.

Joe supports himself making silkscreen designs, doing layout work and miscellaneous graphics. He specializes in the labour-intensive medium of animation, mainly for television commercials. Only about a dozen animators work in New Zealand. There is no back-up of labour as there is overseas, and the animation artist can often expect to stay up all night to meet dead-lines, drawing the frames and writing the camera charts. Last year, Joe found designing street posters and making an animated film for the Auckland band Toy Love more exciting than 'hanging things on gallery walls', though he has exhibited frames from the film in Strip Show (Closet Artists Gallery, Auckland, February 1981).

He expresses his personal vision through comic-strip art. Strong influences on his work have been pre-war animation (Gertie the Trained Dinosaur), French and Japanese comics, Popeye, Metal Hurlandt, Valerian and F'Murr.

The Adventures of Maureen Cringe, a bizarre tale that exposes his wacky sense of humour, was printed in Strips, formerly published by Colin Wilson in Auckland. The magazine appeared bi-monthly from early 1977 in batches of five hundred, many of which were lost, stolen or returned. It was hardly a viable financial prospect, but positive feedback flooded in, especially from the United States. Strips gave Joe the opportunity to create the strange milieu of Maureen and her associates. It was a backdrop against which he could 'plunk all sorts of ideas'.

The plot goes something like this: Maureen, after a three-year stretch in a Penrose shoe factory, sets off for Katmandu. On the plane she has a nasty accident with a vacuum towel disposal unit and is sucked out into space. 'Mysteriously transformed into a bolt of radio energy', she lands in Ultratibet in the twenty-sixth century, at Tiger Tail Records, 'the best-equipped country and western Buddhist monastery on the planet.' 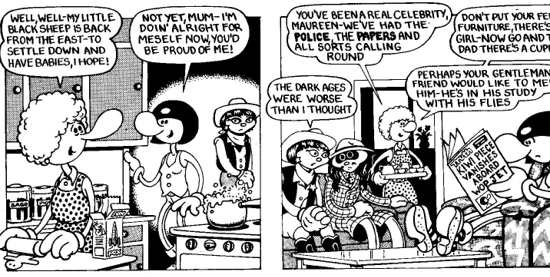 The strip has plenty of classic comic monosyllables to enliven the action -pwot, gomp, zzud, skk, gaargh (and so on) - as well as sometimes savage satire of popular mystic culture, rock music, space and time, not to mention Kiwi suburbia (when homesick Maureen returns to twentieth century New Zealand in giant cosmic articulated truck).

Maureen Cringe existed in Joe's mind' in one form or another' for about ten years as a sort of 'other half'. He background in part reflects his own: state house in the countryside out of Levin. He chose Manurewa for Maureen, as a place 'where nothing much happens and for him as a youth the exciting thing all went on a long way from Levin. His father wanted him to be an All Black: but Joe dislikes anything that tends to regiment people. He spent a lot of time in fantasy world. He read The Phantom, Brick Bradford, Mad and Rupert; and he drew a lot, especially comics about outer space with dinosaurs as the protagonists He was interested in the drawings on the desks at school: how the boys would draw Germans and tanks and super heroes, and the girls would draw girls with elaborate hair-do's and make-up. His comic-strips now have mostly female characters, a reaction against the predominance of male characters ii comic-strip art.I felt somebody had to fill the gap . . . there's an awful lot of stereotyping of women going on, with Penthouse at one end and Broadsheet at the other . . . Women can be every bit weird as men!' 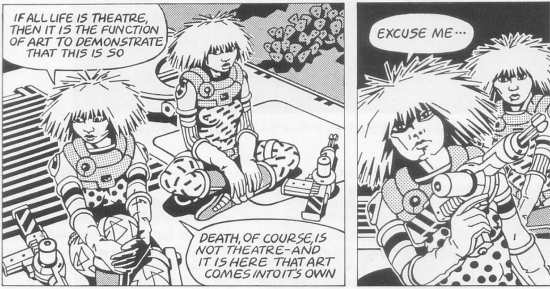 JOE WYLIE
Decline of the West 1979

Joe's student days were marked more by his inability to conform than by academic success. At seventeen he began a course in industrial design at Wellington Polytechnic, supporting himself by working as a cleaner. Lucy Lippard's book Pop Art, published in the late 'sixties, had a strong impact on him. 'I remember seizing on it avidly and taking it into Polytech. To me it was quite a rebellious thing. It was the stage when The Who were painting the Union jack on everything and we were all at Polytech being taught about people being soothed into a relaxed atmosphere by sage green walls.'

Later he went through a similar disillusionment at art school in Christchurch.

'Now I look back and realize the things I did learn. But the tutors simply seemed an obstacle between me and the equipment, and writing essays on form and content didn't really seem all that valid.' He still sees 'being an artist' as something of a stereotype - a social niche.

When he went to Australia in 1970, he found that people were more interested in what he could do than in his qualifications. He found he could make money by drawing up to 1500 frames a week of 'semi-realistic animation' in the Hanna Barbara studios, which produced cartoon series for American television. His five year stint on the animation assembly-line gave him an extensive understanding of the animation medium.

Joe wants to integrate the freedom of ,working for himself with a continuing process of development in his own work. I realize when I look at what's going on around me, that this is fighting for a very privileged position.'

He plans a set of silk-screen prints with comic-strip imagery as a starting point, intended for overseas as well as New Zealand consumption. Strips taught him that feedback from other parts of the world is important. 'There is so much overseas influence coming in. It's high time more went out. Searching for a New Zealand identity might have been important once ' but it isn't any more. It's taking care of itself.'

Christabel Wylie's imagery is also unconventional. Working in the female tradition of needlework, she constructs her images from an extraordinary collection of raw materials - exotic fabrics, lurex, fringing, feathers, fake fur, pom-poms, sequins, beads, dolls heads, buttons, wrapping papers. Her mental preoccupations are metaphysical, her visual talent is for decorative harmony, and her best work reflects both these characteristics. 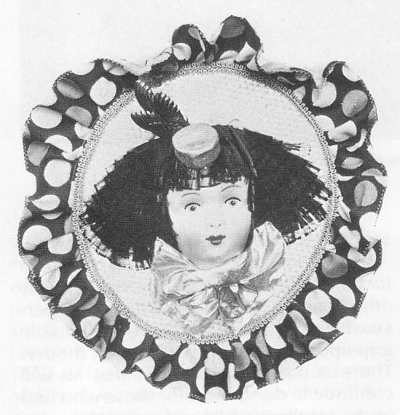 As a child, Christabel was sensitive, and somewhat cut off from the world due to dyslexia. She sees her difficulty with reading and writing as decisive in her need to make visual symbols of her thoughts and feelings. She drew a lot, and made masks and her own paper-dolls with clothes.

When she failed Fine Arts Prelim. at secondary school, she lost the confidence to draw, and went on instead to a succession of jobs - office work, cleaning, factory work, until at twenty she went to Australia, and more assorted jobs.

In 1971 she and Joe got married. In Australia this was still the psychedelic hippie era and the couple opened their own shop, 'The Roxy' in Sydney. Joe decorated the shop front, hand-painted fabrics, made jewellery and leather bags. Christabel painted T-shirts and tie-dyed dresses. In Australia she became aware of the creative potential in homely materials when she saw the work of a Polish artist, Ewa Pachucka, who made rope figures with big wooden crochet hooks. 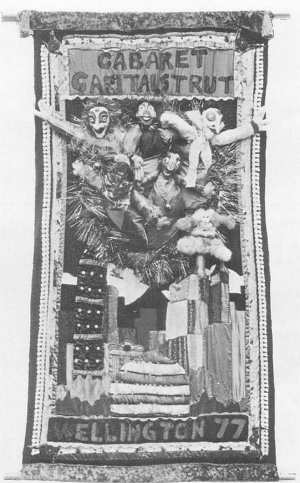 The couple travelled extensively in Asia in 1974-75. Here Christabel found herself 'totally stimulated'. In Asian countries she discovered an attitude that freed her own creativity - that talent is to be nurtured.

'There, life is so rich and full. If the people want to see who they are, they go to the artists in their community and see it mirrored in their work.' In Tibet Christabel spent six months learning Tibetan carpet weaving, and Joe learnt Tunka painting from a Buddhist Llama.

Christabel bought exotic fabrics back to New Zealand, made them into dresses and sold them. For five years she made clothes and sold them at Cook Street Market, Auckland, as well as in markets in Wellington and Christchurch. She became expert in the skills of embroidery and appliqué; and this period working with fabric was a stepping-stone toward a more subjective self-expression.

In 1976, enjoying a holiday on Waiheke, she wanted to make herself a souvenir. She made a loom from an old window frame and wove the piece. That, mounted on fabric and embroidered with the legend 'Souvenir of Waiheke', became her first fabric collage.

Where do her images come from? She finds herself 'struck bv things' that seem to have some kind of connection with herself. Making these images is a recognition of something she cannot verbalize.

Her fabric collages take between a week and three or four months to complete. She 'feels' her way into a work by matching and off-setting materials. She works by chain-reaction, letting the images exist without trying to analyze them. She sometimes begins by making a drawing of an image she has visualized. At other times she will simply take a central object like the doll's head in 'Bride of Frankenstein'and gradually assemble the work around it; cutting the shapes she needs, pinning, sewing, sometimes using a dacron inner lining to make the pieces sit properly. 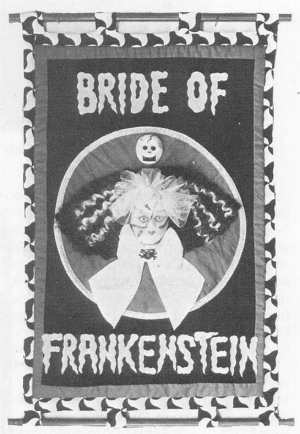 She is a compulsive hoarder. Her environment is alive with pattern - on carpets, fabric, elaborate cushions. There are Oriental ornaments and pictures, figurines, hat-pins, old haberdashery, toys, plants, objets d'art. The mirrors she has hanging on the back fence seem to lead to a more exotic reality than the neighbour's clothesline.

In A Face from the Ancient Gallery (Denis Cohn Gallery, Auckland, December 1980) Christabel moved on from the nostalgic masks and kewpie-doll assemblages of Carnival (Outreach, Auckland, July 1979) to an exploration of new themes. These ranged from decorative works like pictures of cactus and palm trees under a starry sky to photographic silk-screens on fabric, sewn on to banner-like runners. These were self-portraits as a virginal Egyptian acolyte. Combining elements of both obscurity and humour, like her masks they express her fascination with mystery. Beautiful collages in this show were For You, (a spacey landscape), and Under the Light, which, Christabel says, with its flowers and birds, is a memorial to the fact that 'all broken dreams have wings that can fly away.'