Jorge Luis Borges has written somewhere that the aesthetic is a moment when we sense that we are about to understand something, but never quite do. It is in the spirit of this insight that John Reynolds has evolved his recent canvases, shown at 100m2 in Federal Street over the days just before Christmas. This imminence that his works convey of something just about to be revealed - allied with the imperative of a subtle involvement of the spectator in the process of enquiry - make him one of the most interesting' of the younger painters who have emerged here in the last year or two. 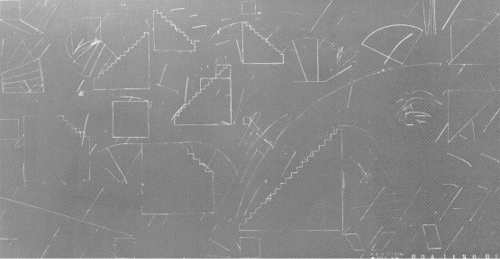 JOHN REYNOLDS
Protocol for an Odatisque 1980
conté and acrylic on board,
2058 mm x 3962 mm
(Auckland School of
Architecture Library)

With this group of works, executed in conté pastel on the black-primed canvas (for previous ones he used an un-primed support). he has embarked upon fields are as if engulfed by night. Starting sometimes with the Ariadne-like thread of a pregnant phrase (Reynolds is a collector of pregnant phrases) and armed certainly with preparatory, sometimes diaristic, studies, Reynolds winds himself little by little into the labyrinthine ambiguity of each work.

There is no special virtuosity about Reynolds's line. It starts out as if to make a classical formal statement of an almost Pythagorean kind, and then dwindles away, scarcely able to hold its own against the invading darkness of the ground. Stylistically his drawing seems to hover between the architectonic rulings of an AI Held and the more intuitive stop/start markings of a Cy Twombly. Unlike Twombly, however, Reynolds's line does not use tonal contrasts to suggest space. To the extent that there is space in these works it is evoked by the direction in which the line moves - its angles and curves and overlaps.

Looking at the largest of these new canvases, Protocol for an Odalisque, one is inevitably reminded of Matisse (and perhaps more obscurely of Ingres): but rather than the earlier Luxe, Calme et Volupte it is the Odalisque motif as it is seen in its latter transformations through many of Matisse's cut-outs. In Protocol for an Odalisque, however, the voluptuous forms of the classical Odalisque are replaced by the severer symbols of the ziggurat, the open fan, the flight of stairs. 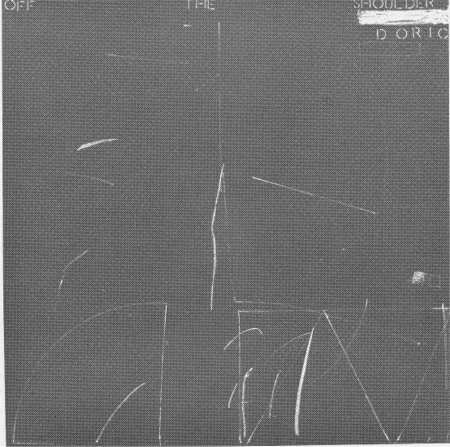 JOHN REYNOLDS
Off the Shoulder Doric 1980
conté and acrylic on board,
914 mm x 914 mm
(Collection of the artist)

Off the Shoulder Doric is a simpler conception that seems to make statements about contrasts between the vertical, departures from the vertical, the triangle, and the wedge-shaped segment of a circle created by a sweeping line pivoted from a point.

John Reynolds is a painter whose future development will be well worth watching.