Edward Fristrom
Interpretations of the Landscape

In 1925, ten years after he had left New Zealand, Edward Fristrom wrote from the United States to an ex-pupil in Auckland:
I did quite a lot of sketching in Carmel. Since I came back I have fixed up my studio but the light is poor in the afternoon. It is such an awful long time since I did any painting from my sketches indoors that I feel like a fish out of water at it. I prefer the out of doors. (1)

The plein air approach, suggested in this letter, had marked Fristrom's art even before his arrival in New Zealand. 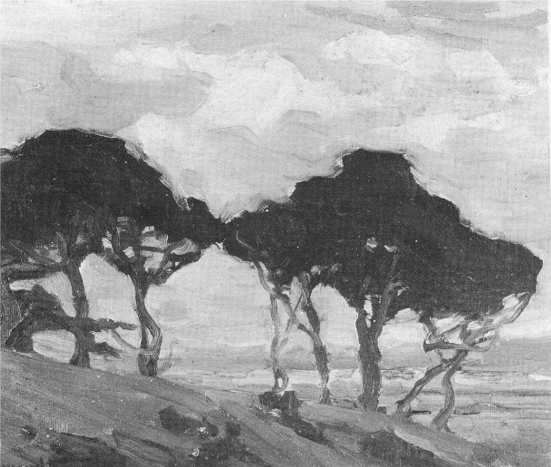 His works point both to his European origins and to the manner in which stylistic information was generally received into New Zealand. In the 'colonies' distance from Europe made it difficult for local artists to discern what was truly important in contemporary European art. In fact Fristrom's art owes less to the Impressionists than to the older generation of artists such as Corot, the Barbizon painters and their popularisers, like Bastien-Lepage. Out of the complex interweaving of strands and ideas that was the European artistic milieu of the latter part of the nineteenth century, Fristrom was to follow the double thread of the realist inheritance and the move toward a more subjectively defined decorative art by which realist currents were modified and changed.

Fristrom's art relates to that of second-line artists in Europe and to the colonial artists largely isolated from mainstream European developments. Their art suffered a time-lag, remaining always behind that of their European contemporaries. Influences tended to overlay one another and resulted not in major re-evaluations but in minor modifications to existing approaches. Fristrom's New Zealand years clearly show both the accretion of 'styles' and the processes of modification.

The bulk of his paintings are landscapes, and of his known works only two depict outdoor settings which include figures. Fristrom's main preoccupations lay with the exploring, in his paintings of an unpeopled environment. 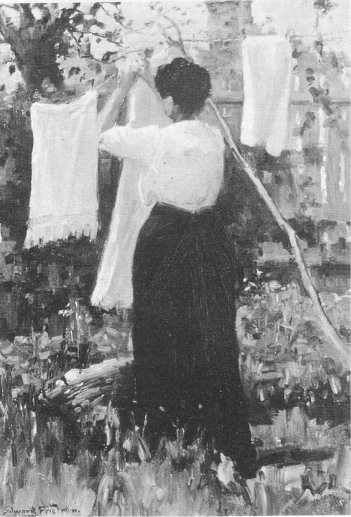 Against the preponderance of landscapes The Washing Line stands out. Immediately reminiscent of Manet's The Laundress, the work points to Fristrom's 'realist' heritage: it is a scene of everyday activity placed in a contemporary context. The picture has the low key charm of a familiar scene often observed, and was reportedly painted in the backyard of the Grafton boarding house where Fristrom first lived on his arrival in Auckland.

The sense of close observation in the depiction of the woman's pose, the clothes swaying on the line and the dappled washing basket lying in the grass contrasts with the more decorative handling of the 'background' in the upper half of the picture, where fence, chimney and tree provide a softer-toned area. The fence cuts off the space, keeping the figure in the foreground and flattening the surface. The tree also increases the feeling of a flat surface: its branches spread out and combined with the pastel touches to give a pretty almost blossom like effect.

The Washing Line is one of the few Fristrom works where a sense of sunlight is evident. Yet, colour and paint texture seem more important than a study of sunlight effects. It becomes apparent that such on-the-spot work was intended to facilitate the grasping of the 'truth' inherent in the immediacy of the relationship between artist and subject. To capture the whole environment with its constant light and atmosphere was seldom an aim. Plein air painting and work done premier coup did not necessarily relate to an impressionist 'aesthetic'. Fristrom's art constantly shows his attempts to create works drawn from an immediacy of experience, rather than the re-creation of a physical moment or the immobilisation of the transient.

Structure is always important to Fristrom: be it in the line of a face, the placement of a tree or the arrangement of individual brushstrokes. There is little of the random or the arbitrary, and much of the careful- builder in the assembling of his surfaces.

Fristrom's landscapes are invariably small works. depicting 'small-scale' scenes. A bare handful deal with the more grandiose subject-matter of mountains and lakes, and even these contain little of the sublime. Rather, they depict scenes of settled orderliness marked by small, bright-roofed huts and nondescript vegetation. They call to mind Logan Campbell's exclamation: 'I have tamed the wilderness'. Enthusiasm for plein air painting, combined with the all-pervasive tenets of realism, had required that an artist alter the scale on which he worked. The shift in scale of vision and the impulse towards 'commonplace' motifs did not go unnoticed. As the Lyttelton Times commented:
In depicting the minor characteristics of nature, the artistic fraternity in its desire to escape the hackneyed theatricalities of the past has perhaps veered a little too far to the other extreme by immersing itself in the somewhat sombre beauties of bush, river, road and hill to such an extent that its collective output, when hung on a wall in bulk, has a decidedly depressing effect.(2)

Fristrom repeatedly chose such sombre beauties', of which the most common are his New Zealand trees. Differing conceptions of each type of landscape are reflected in the different types of tree which inhabit them. The pohutakawa, the karaka and the manuka gave Fristrom particular inspiration. With their thin trunks, spindly branches and weather-worn quality they were a perfect motif for an artist interested in decorative naturalism.

In a series of five small works painted during his last years in New Zealand - of which A Cloudy Day, Palliser Bay is one - Fristrom used the karaka tree to make one of his most definitive statements about the New Zealand environment. All five paintings involve an intimate close focus on a small square of the environment whose very perimeters and being are defined by trees. The world telescopes inward and nothing beyond these close boundaries exists or is relevant. The sense of containment limits the boundaries, and the trees themselves become the statement. The karaka, in contrast to the more civilised oak or poplar in other of Fristrom's landscapes, inhabits an isolated half-world between the settled countryside and the sea. 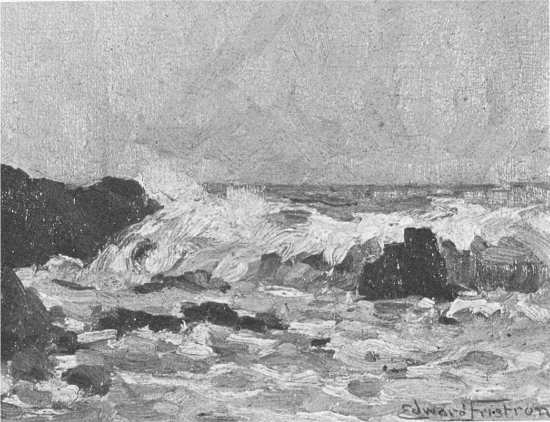 A Cloudy Day, Palliser Bay depicts a scene on the edge of the inhabited land: a fringe-world with a mood of sombre resilience. The cloud-filled sky adds to the austerity of the scene. The mood is set by the hand ' ling of trunks and branches of the karakas. The foliage is painted as a heavy impenetrable mass. The play of light, evident in A Washing Line, is absent. It no longer breaks up the solidity of the tree's shape; instead the branches form a dark pattern against a lighter background. The trees stand out in strong silhouette against a cloudy sky and define the point where sea separates from land.

Despite its title A Cloudy Day, Palliser Bay does not depict a changing atmosphere. The portrayal of such a day means, however, that a greatly reduced palette is used. A few swift strokes of blue in the sea and sky and some mauve impastoed touches in the foreground are the only breaks in the greens, browns, greys and creams that make up the work. Beyond the bay the distant hills are wholly subordinate to the karakas, sentinels of the horizon.

For Fristrom the karaka tree best expressed a particular quality of the New Zealand environment, Native trees combined their distinctive shapes with an unprepossessing quality. Small and seemingly insignificant, they were imbued, through Fristrom's close scrutiny and enclosure, with a significance wholly their own.

Three late landscapes are evidence that Fristrom was willing to abandon the distinctive tree shapes in favour of a motif selected precisely because it lacked a strong focal point. These three works retain links with appearances and the visible environment. Nevertheless they provide motifs wherein the materials and the manner of their application almost overwhelm the representation.

In Glimpse of the Waikato River Near Cambridge Fristrom has selected an overall configuration of land undistinguished by any one feature. In the broad handling the shape of strokes is clearly visible and the thick, energetic application of paint has a life all its own. The paint all but engulfs the form of the landscape. Nothing is explicitly detailed. The treatment establishes the painting as one of the most adventurous of Fristrom's landscapes: it retains only minimal links with the scene it represents and the animated surface becomes the main point of interest. 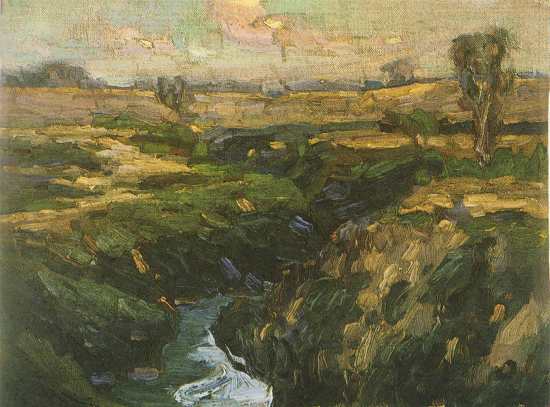 No doubt Fristrom's approach in Glimpse of the Waikato River Near Cambridge would have given the critic who wrote of Fristrom's work in 1907 as 'fanatic' further cause for alarm. Contrasting Fristrom's work with that of Charles Blomfield, the writer sees the two men as antithetical. Whereas Blomfield is the master of the 'superfatted detail', Fristrom 'runs amok in the other direction . . . rejecting any detail whatsoever . . . saying "there's a picture; that's nature as I see it; if you can't, so much the worse for you".'(3) Yet 'nature', as Fristrom saw it, had in his paintings over the years a constantly changing face.

If Glimpse of the Waikato River Near Cambridge shows a face almost featureless, Motutapu Island and Surf and Rocks, in depicting the changingness of sea and sky are even more so. The relinquishing of a key motif, which anchors the work through specific details, is even more apparent.

Motutapu Island is made up of a shifting texture of strokes that merely suggest coast, sea and tidal flats. The freely structured foreground fills most of the canvas and only the 'archetypal' blue -dark blue - configuration of sea, land, sky allows a representational reading. Without such cues the painting would become wholly abstract.

The move toward a total autonomy of surface is seen also in the small Surf and Rocks. The idea of patterns formed by objects has given way to a conception, no less two-dimensional, but more concerned with the way paint can on the one hand be manipulated to achieve the desired effect, yet on the other retain its own qualities. In Surf and Rocks both Fristrom's palette and his 'motif' are drastically reduced: a flat tone indicates sky; dark areas the 'rocks' over which the 'surf', a medley of green-toned strokes topped with impastoed white, breaks.

Motutapu Island and Glimpse of the Waikato River Near Cambridge lack any signs of human contact whatsoever. The sense of emptiness and isolation implied so frequently in earlier Fristrom landscapes becomes explicit. In Surf and Rocks Fristrom's extreme close-focus suggests that even the concept of landscape was becoming irrelevant. Forms, however, remain, and Fristrom, although he came close to abandoning them, never in fact relinquished his hold on the visible world - or rather it never relinquished its hold on him.