Pulp, an exhibition organised by Seddon Bennington at Wellington's City Art Gallery over the summer holidays reflected the well-known paper revolution that has spread internationally from the early to mid-1970s. Sparked off by lively experimental projects in the United States, work in handmade paper is now attracting artists, with widely diversified objectives. Probably the first show to give comprehensive coverage to paper used for special effect was Printed, Cut, Folded and Torn, staged by the Museum of Modern Art, New York in 1974. It included cut prints by Lucio Fontana, woven prints by Alan Shields and printed images embedded in hand-moulded paper by Robert Rauschenberg. In 1978 SITES in Washington toured the exhibition Paper as Medium, moving emphasis yet further away from paper being used solely as a vehicle for the graphic arts. 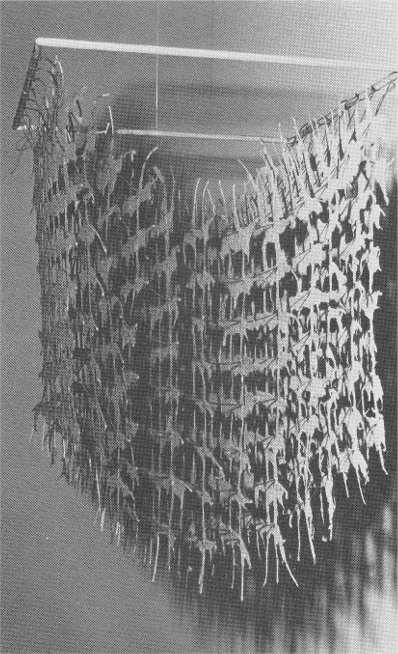 Wellington's show, with artists from New Zealand, the United States, Britain and Japan, presented paper as a substance that is worked 'in' rather than 'on' and there were virtually no pieces which were traditionally drawn or printed. Most contributors had been attracted to the handcraftsmanship of paper, and several have looked particularly to its Eastern tradition which values a close interaction with nature. Chris and Annette Booth, for example, combined their respective talents for sculpture and papermaking to create Scrub Nests, a work evocative of the New Zealand bush, and Wall Hanging Lampshade - a deceptively simple work which very beautifully exploits the translucency of paper and natural flax fibre. Kate Coolahan's Paperworks have evolved over a longer period; she has studied 'Washi' (Japanese handmade paper) and conducted her own papermaking workshops in New Zealand. Her freestanding, folded structures in Pulp stood no more than 15 inches high, yet they evoked a much larger scale. Left undyed, the rag pulp was stitched in areas with silk thread.

Gordon Crook's approach is altogether different; he paints out the textural subtleties of his paper in order to give primacy to the image. The cast sheets carry surreal compositions - Woodsprite and Skipping Rope - which reveal his belief that one of the important roles of an artist is 'to reveal the universality of things. The beauty and cruelty. The real essence of life and its magic ... and never to be swayed into rationalism'.

Of the overseas participants, the American contribution was the strongest. It was led by GarnerTullis, one of the innovators in the papermaking 'boom'. He uses a variety of methods to make paper but basically begins with fibrous material - cotton rags and sometimes 'recycled' paintings - first grinding it into pulp. This is mixed with water, then strained to create a malleable cottage-cheese-like substance for casting in moulds, handshaping, flattening or embossing. When dry, the textured sheet may be painted, printed or treated in some other manner. Like fellow artists working with paper, Tullis may decide to produce a one-of-a-kind work, a series of handfinished variations of a basic print design, or possibly an 'edition' of cast three-dimensional paper sculptures.

New York artist Susan Lyman sent her delicate Paper Grid Series No. 3, an open cellular structure which hung from the ceiling; Coco Gordon, who works from his own company, Water Mark Studio and Press, combined typography with handmade paper for his Surprise Book, while the designer Martha Glowacki contributed two exquisite Brooches in paper and silk. Lilian Bell, who teaches papermaking at the Oregon School of Arts and Crafts in Portland, provided an ironic note with her constructions, especially Between Torn Webs. 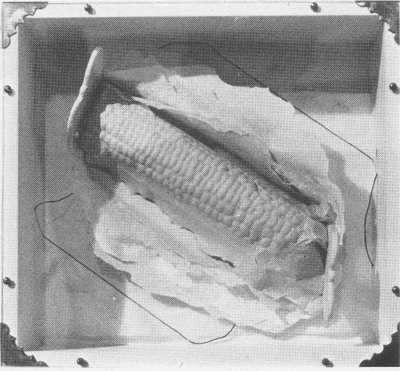 In general, the most impressive works were small in scale and sculptural in conception. It would have been a fillip for the show if those artists who experimented with coloured pulp as an extension of painting could have approached the vivacity and inventiveness of David Hockney's series of Paper Pools or Kenneth Noland's Circles (both produced at Tyler Graphics, New York in 1978). That aside, Pulp was a show which admirably demonstrated the ability of papermaking to open up new horizons for artists, as well as its success in undermining any rigid classification for art media.