The spray-can - that ubiquitous instrument of social protest - has come in recent months to represent the rallying point of art and life in Dunedin.

Entering the city from the North, one encounters more and more fluorescent signals of the contempt in which the decision to violate Aramoana with an aluminium smelter is held. In fact, the signals trace out at least one notable route to art, or at least to what is widely observed as a suspicious decision to use art as the currency of pay-off. For inscribed on the access road to the Dunedin Public Art Gallery and the exhibition from the Thyssen Collection during December and January are the words 'smelter poison'.

Again, around Dunedin, the spray-canned image of the word 'Toxick', and the stencilled letters of 'Aramoana', are evident in posters and flyers. Only the provenance of these images has been art itself, not the desperation of some urban graffito-producer. 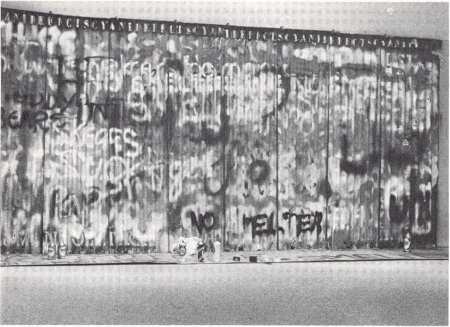 But to get the full flavour of the angry politicisation of Dunedin art it is necessary to go back beyond the decision to host the Thyssen exhibition and, as a widely unacceptable Christmas gift, the decision to site a smelter at Aramoana.

In September of last year, the windows of the Bosshard Galleries were emblazoned in fluorescent pink paint with the title of an Andrew Drummond exhibition, Toxick. Inside, the walls of the gallery were covered with aluminium foil; and running across the foil were twin tubes of clear plastic carrying blood. A pile of dirt lay on the floor, elaborated with Drummond's favoured emblem of willow sticks bound in cotton wool, and sealed with beeswax; and there was a continuous projection of pages from Paul van Moeseke's celebrated report refuting the Government's calculations of smelter economics. Above the plastic blood-arteries, aluminium ingots dangled precariously on fine thread.

No blood has yet been spilt: but the threat remains. And if Andrew Drummond, in his characteristically percipient way, had symbolically given voice to some of the issues, it was again through an exhibition at the Bosshard Galleries in the following month that one could observe, aesthetically, the ominous rising tensions by way of Peter Nicholls's work Restriction-Control.

On one wall of the gallery, dour clay faces peered out from above the straitjackets of tightly buttoned overcoats. On the floor lay sliced and stained sections of tree-trunks, bound and squeezed at each end by steel bands or caps. That constrained explosiveness which Nicholls so often articulates well in his sculpture had found a precise target in the apprehensive and turbulent thoughts running through Dunedin.

The apprehensions, since December, have changed for many into dark resolve; and yet the turbulence has found even wider expression in the Aramoana exhibition - originally at the National Gallery, but, in January, at home in the Hocken Gallery. Just barely in time to constitute an antidote to some of the inflated social inanities surrounding the Thyssen exhibition, the passions of local artists abound - a passion which was figured quietly in Andrew Drummond's withdrawal of his exhibition scheduled at the Public Art Gallery in December in view of his objections to the Thyssen Connection. 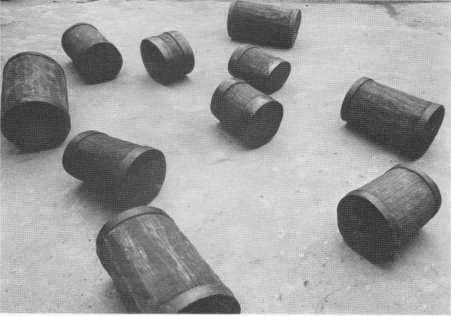 In Drummond's installation in the Aramoana exhibition, his aluminium ingots are now inscribed Soft Sell, and one, again, precariously suspended, not this time over plastic blood-arteries, but over the brittle casing of a blood-red neon tube. The observation of the fragility of the situation is nice: and that same sense of fragility is focused in the characteristically delicate work of Jacqueline Fraser. Here, naturally sculpted driftwood and filigrees of seaboard vegetation suspend in concentric circles from fine threads.

The Hocken Gallery is plangent with the taped sublimity of the lapping of waters at Aramoana; and in this precisely effective image by the composer, Chris Cree Brown, there is a cacophonous aural overlay of arbitrarily clanking aluminium detritus.

The fact that teeth are baring over the smelter issue is topically represented in Ralph Hotere's late addition to the exhibition - a section of power pole bitten into by a chainsaw. The stencilled dedication reads: 'After Jim Dine and Hone Heke', but no-one (not least the local news media) misses the reference to a recent incident in which a power pole, vital to the supply of a smelter at Aramoana, was sawn down.

The sardonic high point of the exhibition comes with Russell Moses's installation, entitled, acutely, Instillation. A tridentine clay candleholder sits on a bed of Aramoana sand, and the lit candies softly illuminate a blow-up of the national anthem which urges in its second verse, 'From dissension, envy, hate/And corruption defend our State'.

But it is to the potent spray-can that the passions of the exhibition, artistic and otherwise, finally belong. The Mayor of Dunedin, a smelter supporter, recently complained of defacement in the anti-smelter graffiti (conveniently forgetting the defacement of a smelter itself). But, as Ralph Hotere clearly demonstrates in his corrugated iron panels with spray cans set before them and available to the DIY spectator, the overlays of painted protest form glorious images in art.

The inscription at the top of Hotere's panels reads Cyanide Effect. It is a perfectly-judged point that one of the effects of political poisoning is to engender vigorous art. It could have been no more vigorous than recently in Dunedin; and undoubtedly it will continue to be so.