Gretchen Albrecht has abandoned the freely flowing washes of colour that have distinguished her work for almost a decade. Instead, the major forms in the new paintings have a strong geometric basis, with the circle, or segments of it, being the dominating shape followed by narrow, pointed triangles. As in her early work, the colour is again opaque: but applied with greater control and finesse - skills acquired from mastering the liquid washes in the works that came in between. If the colours are now denser, and therefore speak of different qualities, they still retain their chromatic brightness even if their range differs. 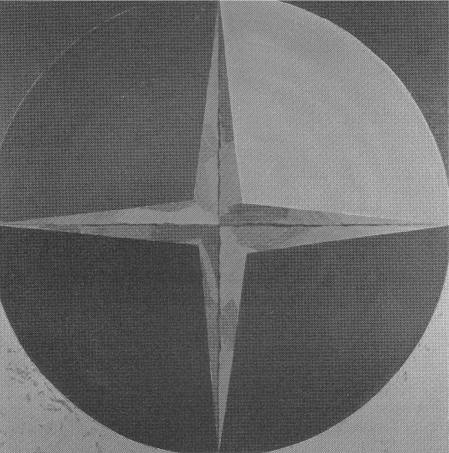 In paintings like Eclipse or Cerise, colour, paint texture and shape are welded together with assurance to present a well managed marriage of technique and idea. Much the same applied to After Piero with its singular triangular form: except that the free shapes used to break up the lesser space division at the base of the painting were a little less well handled, even though there was the effect of leaving the main sweeps of colour unchallenged.

The nine paintings in the exhibition amounted to a handsome display that reaffirmed Gretchen Albrecht's standing as an artist.

These large brush drawings in black ink of motor vehicles and other objects found in a mechanic's workshop contained a number of good examples of Philip Trusttum's ability as a painterly draughtsman: but the greater number of drawings were no more than average in quality. A lot were interesting, but others were not so convincing. 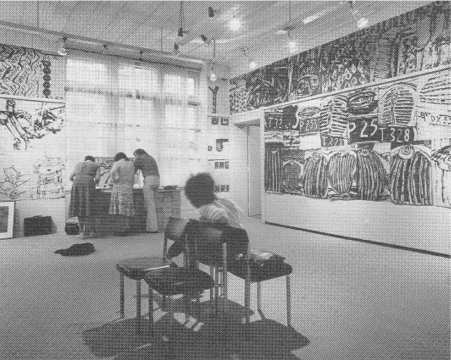 The drawings fell into two distinct groups: by far the larger displaying a v

ery painterly use of the brush while the remainder were more lineal in quality. Although proportionately small, the latter group contained several of the best drawings: that is, in terms of clarity of image, exploitation of pictorial space and draughting dexterity. It was only in this group that large sections of a car, or of a hydraulic hoist, were to be found, for the majority of the drawings concentrated on particular details such as a tail or headlight fitting, grills, bumpers, hubcaps, the wheel assembly or some other part, all gleaned from a variety of vehicles, some distinguishable by their name-plate or trade insignia.

Details may be repeated a number of times with minor variations; while at other times a drawing of a highly enlarged detail remained obscure as to what it represented until another drawing of the same part revealed its source. This was particularly so with the expressionistic renderings, some of which fail to hold together well visually. If details were blurred, the general pattern of the brush's movements might suffice: but when the counterbalancing factor of composition was lacking, then pictorial disintegration followed.

If not the most exciting of Trusttum's pictorial explorations, the drawings were at least revealing as an extension of his subject matter, as well as producing a handful of worthwhile drawings.

Occasionally exhibitions can present the viewer with the dilemma of seeing works for which a close affinity can be felt, while the remaining items produce the opposite effect. Such was the case with Chris Booth's Northland & Auckland Sculpture.

His modelled sculptures seemed artificially contrived, with ideas that were laboured, even theatrical. More accessible was the frontally-conceived Whangaroa 1979 (see Art New Zealand 12: p 16) which came very near to successfully proving its point, despite its formal limitations: but the crux of the exhibition resided in two works only. 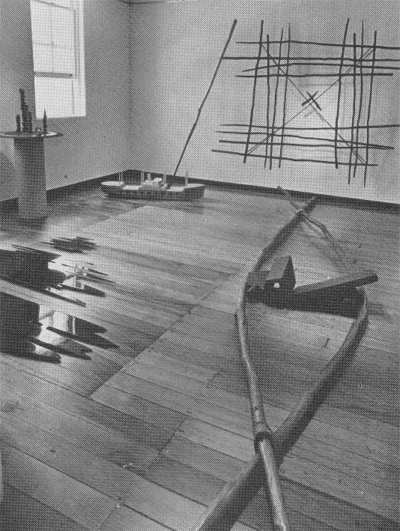 These possessed a vitality that was both well-resolved and fully self-contained, carrying as they did a visual quality that accommodates our native aesthetic. Qualities owed largely to the natural materials used in their construction: Scrub Nests 1978 with its regulated series of upright manuka sticks set formally in a wooden base and the small pendants of hand-made paper suggestive of spider webs, and in Godsticks 1980 the intertwined staves that form a quartet of squares within squares suspended on the wall and enclosing the totems.

If the former carries the suggestion of a natural environment, Godsticks possesses a strong undercurrent of some practical Maori artefact whose purpose is on the edge of being formulated. What impresses is the ease with which both works have been conceived and put together so that any rigidity of composition is held in just the right balance by the informality of the materials used.

The common title of Outriggers given to the four works that formed this exhibition seemed appropriate.

As with Pine's previous sculptures no attempt was made to disguise the nature of the materials used. In light constructions, considerable use was made of aluminium and plastic piping, strip aluminium and rope, all held in tension through the use of counter-weights and a balance of all the various forces held in suspension. The impression of lightness was thereby combined with the sense that each work was anchored to the surface upon which it rested. The main collective members of each work were held in delicate balance as if floating above ground-level while the suggestion of rocking movement remained a possibility inhibited only by the anchoring counterweights. 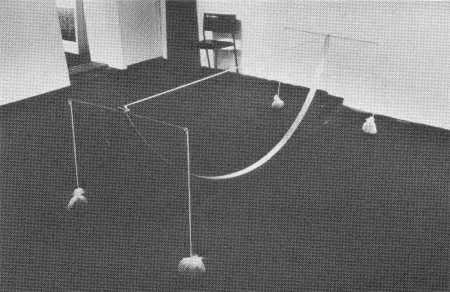 It was the suggestibility of each work - the way in which the various individual parts were combined to form a single assembled work - that was crucial, for the conception had to accommodate and transcend the literal reality of the materials used to succeed in clarifying its implied visual proposition. With such minimal means the viewer has to fill in the gaps, as it were. To a reasonable extent these constructed works allowed this to occur.

If there was any fault it was that they were visually less strong than they could have been: the element of sagginess was allowed to enter. This appeared as a miscalculation in the materials used as related to the scale of a work and the purpose for which it was used. As a result the element of lightness was to some degree countered by the metal strip, for example: being just a little too light in weight to produce the impression of combined strength, lightness and balance held in perfect check. The hint of limpness in the suspended aluminium stripping was just sufficient to take the edge off such a harmonious working relationship. Nevertheless, the works were moderately successful in overcoming such limitations.

George Baloghy's latest series of paintings failed to deliver the same punch as his two previous exhibitions. This resulted not from any failing of his ability as a painter, but from a deliberate choice of a more passive means with which to demonstrate his skills. From only a single work was any hint of a possible knock-out blow forthcoming.

The series of mainly small paintings called Sheep Farming in the South were interesting: but they lacked the double thrust of his earlier commentaries. Studded with solid classical columns and monumental sheep, the pastures in these paintings were a mild and somewhat poignant statement on the status of a national, institutionalized industry. One telling work showing a colonial chair perched on top of a single Doric column, Empty Chair, was also one of the most painterly in the set.

The Urban Real Estate paintings were predominantly factual renditions of shops and houses. In a painting like Food the relationship of shop buildings to street levels were well observed and, with the simplified techniques and textures, this play between the various angles enhanced the controlled sense of complex pictorial space. Emerging above these direct statements came a work that was soaked in double-layered contextual imagery: Alterations: The Given as an Art-Political Statement. Here the old Auckland Public library building on the corner of Wellesley and Kitchener Streets had been converted into an outlet for Kentucky Fried Chicken. It may well be that such a promotional ploy would gain more financial support than the present plans to convert the structure into an extension of the adjoining City Art Gallery!