Sub-titled A Guide to Feature Film Production, this handsome book provides a much-needed historical perspective to the current Renaissance of Antipodean cinema that is also making itself felt on these shores. The first entry, on the 1900 Soldiers of the Cross, describes a curious production that is really something of a multi-media show avant la lettre, so to speak. A propaganda piece by the Salvation Army, Soldiers opened at the Melbourne Town Hall and bombarded me presumably stunned audience with 'thirteen films, some 200 slides and an elaborate music score using themes from hymns and the popular classics'. Interestingly, this inspirational spectacular toured widely in New Zealand as well as Australia.

Soldiers of the Cross is the initial entry in the first of the seven sections into which the text is divided. Films are provided with full credits and informative commentary including selections from contemporary reviews. The seven sections roughly cover the various decades from 1900 to the end of the 'seventies. From the earliest period when Australian filmmakers were in fact prefiguring many of the so-called 'innovations' of European and American cinema (Charles Tait's 1906 film The Story of the Kelly Gang was quite possibly the longest narrative film in the world at that point of time), right through the enthusiastic exotica of the silent film in the 'twenties, there are many fascinating titles. And the main achievement of the 'thirties was the prolific output of the Cinesound Studios, including the popular Dad and Dave series. A still of a Swaggy Chorus from Showgirl's Luck with smiling chorines dominated by a gigantic statue of a kangaroo predates the Edna Everage aesthetic by three decades! 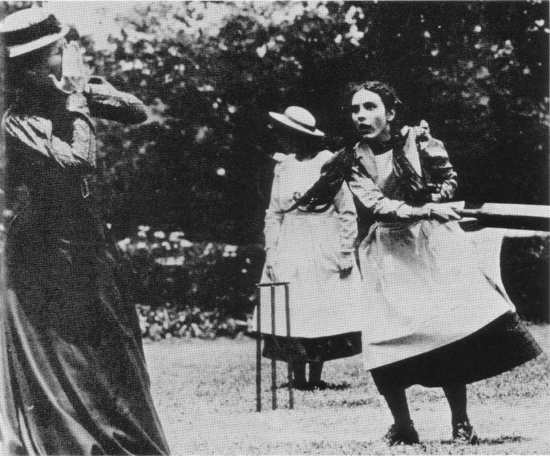 The Second World War cut film-making drastically; and most of the film-maker's energies seemed to be tapped by the war propaganda machine. With peace, Australian cinema seemed not to fully recover and the majority of the thirty-eight films produced between 1946 and 1964 were the work of visiting overseas directors.

Works like Anthony Kimmins Smiley (1956), Jack Lee's Robbery Under Arms (1957), Stanley Kramer's On the Beach (1959) and Fred Zinneman's The Sundowners (1960) used Australian locales without really creating a specifically Australian cinema. The British studios did show some interest in establishing an indigenous Australian cinema, but that did not eventuate. Harry Watts, whose Siege of Pinchgut (1959) was the last film to be released by Ealing Studios spoke in 1949 of 'the immense film potentialities in Australia and a lot of good stories' and certainly the 131 films discussed in the last section of the book indicate a complete vindication of this statement.

In the last decade and a half it seems that most of the visiting directors to film in Australia were ones whose careers were at a fairly low ebb at the time - one thinks of Michael Powell and Tony Richardson in this respect - although one exception is Nicholas Roeg with the brilliant Walkabout. But a young breed of Australian directors emerges in this last phase - Peter Weir (The Cars that ate Paris, Picnic at Hanging Rock, The Last Wave), Fred Schepisi (The Devil's Playground), Bruce Beresford (Don's Party, The Getting of Wisdom) and Gillian Armstrong (The Singer and the Dancer). It is only regrettable that such a small proportion of these recent films are making it on to New Zealand screens.

The relationship between Australia and New Zealand is a strange one: how many New Zealanders have found out to their dismay that many Americans think of our country as the eighth Australian state - it is pleasing, then, to see New Zealand take the initiative at times: and one of the first Australian films of the 1965/77 period is the Pacific films production Funny Things Happen Down Under which featured New Zealand performer Howard Morrison (as well as a young Olivia Newton-John).

For some years I have felt a nagging urge that John O'Shea's two features for Pacific Films - the 1965 Runaway and 1966 Don't Let It Get You - should be re-aired. Now that Australia's cinema history has been documented so thoroughly, surely it is high time that the service should be done for our own New Zealand filmmakers.