The Abundance of Paemanu at DPAG

Paemanu: Tauraka Toi―A Landing Place is a momentous exhibition spanning the second floor of Dunedin Public Art Gallery (DPAG). With predominantly new works from over 40 Ngāi Tahu artists, the show is curatorially dialogic, offering poignant moments of connection. Tauraka Toi was described to me as ‘fresh’ but this does not quite capture it as the exhibition deserves to be read within the diversity of Ngāi Tahu hapū and whānau worldviews which are exceedingly expansive.

Tauraka Toi continues the palimpsest of toi Ngāi Tahu with glimpses from each work building a layered and multifaceted universe. This world resists linear time in favour of aspherical understanding, of reaching through whakapapa, in any direction, and holding a narrative, place or person in order to tell your story. 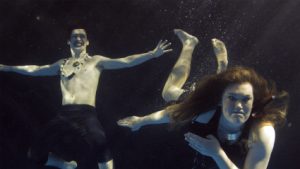 A relationship between Paemanu and DPAG has developed since 2018, after the 2017 exhibition Paemanu: Nohoaka Toi at Toi Moroki Centre of Contemporary Art, Christchurch. Interested in DPAG’s institutional history and future direction, Paemanu started researching mana whenua representation in their collection and prompted DPAG to consider what the four pou of their collection were. Discussions revealed that, like many collections throughout the country, DPAG’s reflected historical issues of loose collecting policies which were flexible to directors’ interests, resulting in a non-representative collection. Furthermore, due to budget constraints, relationships with benefactors were fostered while there were none with mana whenua. ‘How do we engage with that?’ says trustee Rongomaiaia Te Whaiti.(1)

Hurahia ana kā Whetū co-curated with DPAG curators Lucy Hammonds and Lauren Gutsell was the result of this engagement. Welcoming visitors into the exhibition is Karanga (2002) by the late senior artist and educator Cath Brown (1933–2004, Ngāi Tahu), a ceramic work placed on a large plinth of Ōamaru stone. Wrapping around this welcome is a powerful installation by Ross Hemera of drawings directly on the large curved walls of the gallery entrance. These red and black inscriptions are informed by the many rock drawings which Hemera used to draw as a child, from around the Ahuriri River and Waitaki Valley, although they are ‘now unfortunately underneath the Benmore Dam’.(2) Hurahia ana kā Whetū positions significant older works alongside all the Māori, Pacific and Chinese artworks, cultural communities connected to Paemanu, from DPAG’s collection. Writers with links to Paemanu and DPAG were invited to respond to the works in the form of a wall label, expanding the exhibition’s dialogue. As a result, not all works have labels, or perhaps not all labels are included. Within the comprehensive approach of engaging with DPAG’s collection, Paemanu instigated their own, as a way to develop a repository of Ngāi Tahu artworks. In conversation about the development of the Paemanu Collection, with another trustee Simon Kaan, he deemed it ‘a signifier of intent’.(3) The Paemanu Collection will be in the care of DPAG for five years, compelling the gallery to strengthen its relationship with Paemanu, through conservation, loans and future exhibiting opportunities, as they have historically done with patrons.

Tauraka Toi is arranged in five parts, each having advisors from the curatorial team. With over 40 works in the exhibition, I can only write about a few but I hope to read further published and more extensive texts that such a coup as Tauraka Toi deserves ― not because it is in Te Wai Pounamu and it is Māori, although I cannot help wondering if these are the reasons I have not read anything about it.

Upon entering DPAG the first artwork to greet visitors is the sound from Rachel Rakena’s mammoth 16-channel 2021 video installation Ko te wai he wai ora which, with a team of 10 practitioners and a kapa haka, is a curatorial section in itself. The first work visitors see is Ross Hemera’s 2021 Takutai Te Waka: Ara Moana acting as the threshold into the gallery itself. 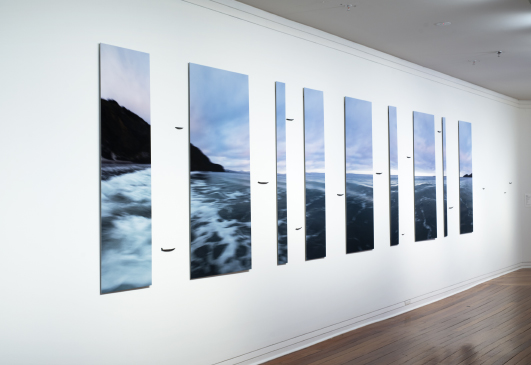 Within the Whakahekeka o Kā Roimata section overseen by Ross Hemera, is Simon Kaan’s 2021 work Whakaruku. Interestingly, it is not his iconic paintings or prints that are mounted in this show but his collaborative works. Ceramic waka made with Wi Taepa (Ngāti Pikiao, Te Ātiawa, Ngāti Te Roro o Te Rangi, Ngāti Whakaue) and photographs of Aramoana made with Derek Morrison (Pākehā) are instantly recognisable as Kaan’s work, albeit translated to a different medium, providing a generous offering of personal connections to people and place. Within the second section, Whakawhitinga, led by Nathan Pōhio, is Kaihaukai Collective’s 2021 Untitled Midden. Consisting of Kaan together with mutton birder and Otago Polytechnic Senior Lecturer Ron Bull (Kāi Tahu, Ōraka Aparima), this collective has developed projects that centre on mahinga kai, engaging with the care and agency that comes with customary harvesting practices, considered part of the DNA of Ngāi Tahu.(4) Kaihaukai Collective presents edible experiences and their midden results, leaving space to consider what seasonal food will be harvested, prepared and eaten in the future.

Tūtakitaka (2021), by Mya Morrison-Middleton (Ngāi Tahu, Ngāi Tūāhuriri) and Madison Kelly (Kāi Tahu, Kāti Mamoe) is a considered exploration in materiality. Having met at a Paemanu gathering in late 2020, the two artists talk candidly about the acceptance and expectations felt through joining the Paemanu whānau.(5) In particular, they share their experience from their first Paemanu hui at DPAG when, alongside other younger artists, they were charged with placing kōkōwai around the kōhatu mauri which had been laid in late 2019.(6) They then attended a three-day wānanga at Ōtākou marae with invited artists in April 2021 where the exhibition and curatorial leads for Tauraka Toi were outlined. Those present were asked to submit a proposal of new work, under the premise that everyone at the wānanga could be in the exhibition if they wanted and develop tuakana/teina relationships to help refine ideas. 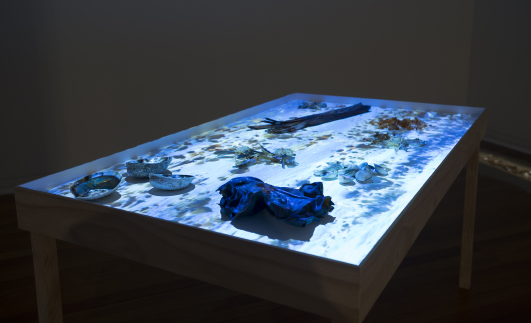 Morrison-Middleton and Kelly’s Tūtakitaka is located within the Tohorā section for which Rongomaiaia Te Whaiti and Martin Awa Clarke Langdon were the curatorial leads. Utilising the tactile texture of tohorā, harakeke and tōtara, Tūtakitaka are two sculptural parts that form one installation. With a gentle touch, Tūtakitaka reveals the deep relationship between whale and wood. Tōtara was readily used for building waka and the free-standing branch that constitutes one part of the work has the 45-degree angle recognised for its use when carving out hoe. Harakeke harvested from Orokonui Sanctuary and milled flax from Riverton Flax Museum is suspended from the porous bone of a southern right whale. All these materials speak to notions of resources, ruminating on the complexities of whaling and forestry, whilst highlighting their importance as taonga.

Innovation of resources is an aspect of Vicki Lenihan’s work which is mounted opposite Tūtakitaka. He Whao|Skills (2021) is a series of 3D printed models of ship nails that were reconfigured into fish hooks and are now housed at Otago Museum; 3D printing is also utilised for Langdon’s Untitled (rendered) (2021), located within the centre of the gallery space. Te Whare Moemoeā, Halfcast House (2021) by Emma Kitson (Kāi Tahu, Kāti Māmoe, Waitaha, Kāti Te Ātawhiua) is inspired by the whare her tīpuna lived in at Whenua Hou. A similar replica can be seen in a painting by Rongomaiaia Te Whaiti who also drew inspiration from her tīpuna who lived at Whenua Hou. The discourse between works within the Tohorā section is layered and inquisitive. 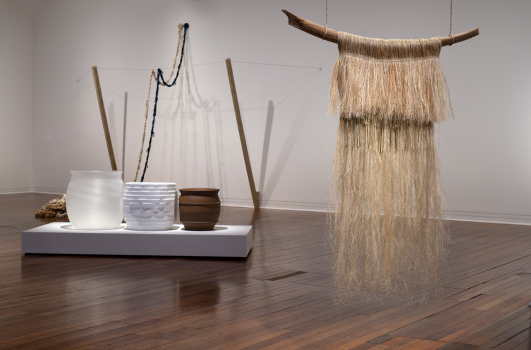 There is a current of generosity within the exhibition when artists share accounts and histories of the whakapapa narratives which inform the works. An example of this is Kiri Jarden’s endearing hand-sculpted ceramic and bronze small works, situated on shelves throughout the exhibition. Walking through the show they became a familiar sight, and in particular in conjunction with the wall text that revealed more about her tupuna, Emma Turumeke and her kurī. On one wall Ahakoa te tūāhuatanga, he kikino kē and Au Au Au! (both 2021), two ceramic and one bronze kurī, are next to Jarden’s daughter’s work, and her tupuna’s namesake, Turumeke Harrington (Kāi Tahu, Rangitāne, Ngāti Toa Rangātira). These are heartfelt and logical connections, reaffirming the many considerations apparent in not just the artworks but the exhibition as a whole. I encourage you to read further about Turumeke’s practice on her website where she writes articulately about her works.(7)

Perhaps the youngest artist in the exhibition, Moewai Marsh (Kāi Tahu, Ngāti Kahungunu ki Wairoa, Puketeraki, Kāti Huirapa), has collected kōkōwai and made paint with earth pigments from Arai Te Uru, Puketeraki and Ōtakou for her 2021 work Tuturu series 1–4. At these sites, Marsh also harvested invasive plants, such as gorse, to make the paper which holds the paint. These works are in conversation with Pūtahi/Confluence by Neil Pardington (Kāi Tahu, Kāti Māmoe, Ngāti Kahungunu, Kāti Waewae), a series of intimately framed photographs of sites of significance, some of the very locations from which Marsh harvested. Within this section, Whakawhitika with Nathan Pōhio as the curatorial lead, is the beautifully touching It rains, and we swim (2021) by Megan Brady (Kāi Tahu). Here she has created what appears to be a cobblestone path on the gallery floor out of Dunlop memory foam. Again, materiality plays a strong part in many of the works, this one in particular recording the presence of visitors’ bodies.

It would be remiss not to mention the concurrent exhibition He reka te Kūmara at DPAG, co-curated by the gallery’s 2021 Ihupukutaka Kairaupī Curatorial Intern, Piupiu Maya Turei (Ngāti Kahungunu, Rangitāne, Te Ātihaunui-a-Pāpārangi). Cognisant of DPAG having no Māori staff within management or curatorial roles, Paemanu advocated for futurity, encouraging the recruitment of Māori staff, and Piupiu became the first Māori intern since its inception in 2012. He reka te Kūmara is the result of a formidable curatorial team of four Māori Ōtepoti-based women, Aroha Novak (Ngāti Kahungunu, Ngāi Te Rangi), Madison Kelly, Mya Morrison-Middleton and Piupiu who states, ‘It was about the four of us working collaboratively together in a kaupapa Māori way. The project stemmed from a desire to work in a specifically Māori way.’(8)

The significance of Māori curators and artists abounding within DPAG in this single moment is something to inhale deeply. Hurahia ana kā Whetū, Tauraka Toi and He reka te Kūmara are a gathering of exhibitions in which Māori have made the collective curatorial and authorship decisions. This is how I want to see Māori autonomy within galleries: relationships intact, artworks cared for, curators fostered, collections developed, and mana enhanced. 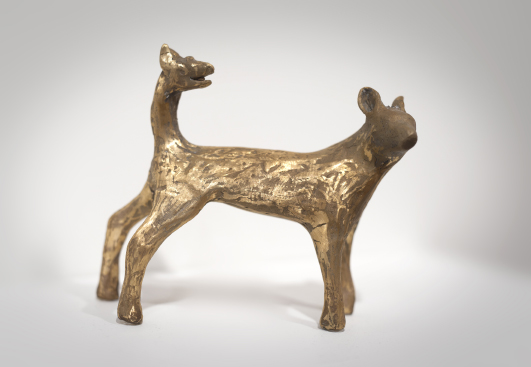 The visitors fortunate enough to experience Tauraka Toi during these Covid times are witnessing the public face of years of whakawhanaungatanga, the multifaceted building and maintaining of relationships. Paemanu, themselves a trust of eight artists, have worked with Ōtākou, Puketeraki and Moeraki, advocated for Māori employment, navigated a collection rehang and engaged with over 40 artists to exhibit exquisite work and are developing the Paemanu Collection. This all adds up to a mammoth task, undertaken and achieved with the grace and hospitality Ngāi Tahu is renowned for. It is common practice now for arts practitioners to state and claim our iwi or hapū and it is emboldening when they claim us. Paemanu have done just that, staking a claim that these artists are their own, to care for, to keep and to connect to.