One of the most visually exciting concert experiences in recent months has been From Scratch's performance of their latest work Gung Ho 1 2 3 D. In the somewhat bleak hall-like conditions of the Maori Community Centre, with its 1950s black paint and stretched string coffee-lounge roof, Geoff Chapple, Phil Dadson, Wayne Laird and Don McGlashan gave us the group's most recent work since their return from the South Pacific Arts Festival. 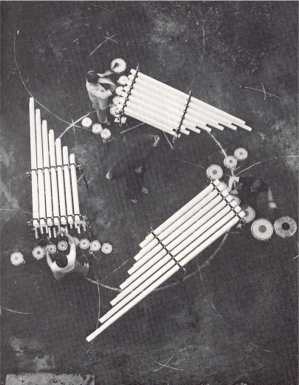 From Scratch: the ensemble

Unlike the gradual unfolding and continuous textures of their earlier pieces, Gung Ho 1 2 3 D presented a more fragmented visual impression. Here, clearly, was a work which had been conceived from a strong visual as well as musical standpoint. The piece is based around a triangular symbol demonstrating changing sets of triadic relationships in the music and between performers. Occult symbolism comes into play in this triadic inspiration, with the three sides of the shape symbolising active, passive and neutralising forces.

The triadic shape was formed by the three sets of instruments (PVC pipes, chime bars and rototoms) tuned to high, medium and low pitches respectively. These were played by each player in his turn as the group moved through a series of seven stations. For each station a drone sound would be sustained from one of the points marked D. As the group moved through these seven stations the music itself went through a series of rhythmic expansions, moving from 4 time at the outset to a more complex 10 metre in the final station.

The term 'Gung Ho' is derived from Rewi Alley and means 'work together'. The 'exchanged and mutually interdependent roles' of the four musicians reflect this maxim, and curiously enough the Chinese ideogram for the term is set within a triangular frame. The 'Gung Ho' concept certainly sums up the fine integration and sense of ensemble that Dadson and his friends show. Dressed in their navy-blue overalls, moving around the giant panpipes-like instruments which they proceed to bring to life with percussive slaps of a rubber pad, From Scratch offer a vision of the music of the future in a world where Steve Reichs, Terry Rileys and Anna Lockwoods have reassessed the art-form. 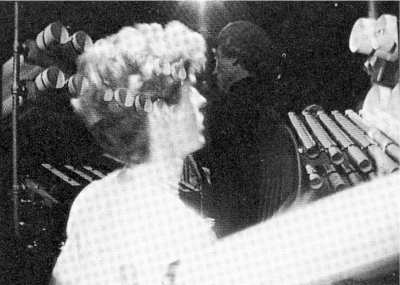 Video image
showing a moment
in the performance of
Gung Ho 1, 2, 3, D

Whither from here? Dadson feels that Gung Ho 1 2 3 D represents the group's most tightly conceived work from a formal and intellectualised standpoint, and quite possibly a source of new directions. The group does not seem to be interested at the moment in more aleatoric or chance musical forms, the approach to music that was introduced by that great pioneer of Intermedia, John Cage. Perhaps more instrumental colours might have their place in future developments- One recalls the fantastic cloud-chamber bowls and mazda marimbas of the late American composer Harry Partch, the latter instrument being constructed from the most unlikely source - Mazda light bulbs - though one would gather the brand is probably immaterial to the sound.

On home soil there is Jack Body's Bamboo Music, where the composer explores both the percussive and woodwind qualities of bamboo; and From Scratch did make some use of blown sounds in the disconnected environment sounds which preceded the formal performance of Gung Ho 1 2 3 D.

The exciting rhythmic textures of From Scatch's pieces have obvious potential for dance interpretation: but as they stand these are not necessary to a visual enjoyment of this vibrant young group of artists. The visual excitement comes to one from their very poster with its triangle of pipe instruments, and it is stressed even more on stage by the enthusiasm and vigour of the young men's performances. instruments and performers combine to create a visual experience set in some of the most hypnotic sounds that have been heard on these shores for many years and, one suspects, for many years to come.