The traditional materials of sculptural art have the power to inspire fantasies. The raddled face of stone, for instance, has moved sculptors over centuries to release a discerned image. The sinews of wood have often provoked an enlivened dynamism.

But as sculptors of a modernist temper push their art along the avenues of high technology, fantasy is ever harder to discover or recover. With all their cleanness and clinicality of line, just because the new materials are materials of technological ambition they can often seem inanimate and inert: unable to inspire fantasy.

The New Zealand artist who is perhaps most alert to the possibilities of breathing fantasy into that dead and yet wholly pervasive stuff of our culture, plastic, is Derek Ball. His recent work, seen initially in late July at the Bosshard Galleries before its expanded exhibition at the Denis Cohn Gallery in Auckland, constitutes both a celebration of fantasy and, at the same time, a characteristically careful artistic cultivation of a technology. 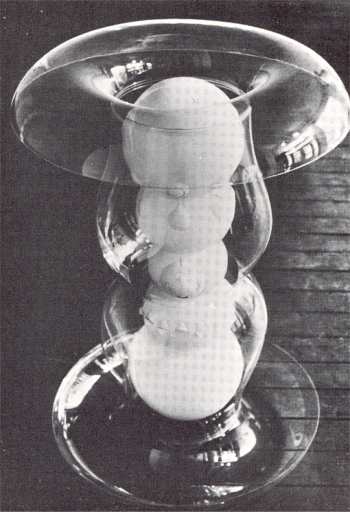 Each of the five large sculptures in Ball's Dunedin exhibition is a construction in vacuum-formed thermoplastic. It is a technical approach which seems to impart to the matter an even great plasticity and flow. The configurations of each work seem to pulse in rhapsodic three-dimensional doodles which relieve the dour and flat presence of the plastic.

This fantasia of doodling has the immediacy of plastic, but it has a spirit which lies deep within the history of art: for each of Ball's works is touched by the genius for fantastic elaboration of that most elusive artist, Hieronymous Bosch.

In fact, Ball's Fountain from the Garden of Earthly Delights - a work familiar from this year's Hansells Sculpture Exhibition - makes a direct reference to Bosch's extraordinary painting. But the work has more than simple dedicatory significance. The inheritance is not so much Bosch's imagery as the recherché turns of the painter's mind - his manner of capturing attention with indefinably symbolic yet simple forms. Like doodles,' the forms of Derek Ball's work suggest the writing out of a mind, not in words, but in pictorial gestures. They constitute, as Ball himself has nicely described his' work, a veritable 'calligraphy of the mind'.

In animating his plastics with fantasy, Ball has not only sought to overcome the deadness of his material; he seems also to have had in view a particular comment on fantasy in art, or at least in his art of high technology. For he sees in the malleability of his formed plastics the exact counterpart of the malleability of fantasy itself. Bosch's mind knew no inhibitions as to how the imagination could be painted out. And in Ball's adept use of plastics and acrylics there seems equally to be no inhibition as to how the imagination may be transfigured. The medium itself seems to flower, to fruit, to blossom and to grow almost as an organism. It is a stunning transition for a material so regularly associated with artificiality.

In that respect, Ball provides a typically wry comment on the artistic treasury of plastics with his work Forbidden Fruit. Here, enclosed and untouchable within a clear acrylic encasement, is a contemporary currency for fantasy, and not just cheap functionality. It is a currency, Ball speculates interestingly, which might have had an immediate appeal for Bosch, if only technology had been so advanced.

The spirit of fantasy, and its expression in the otherwise inanimate materials of technology, also marked the work of Greer Twiss in his October exhibition at the Bosshard Galleries, Three-Legged Race 1980. His constructions, fabricated in aluminium, bronze and steel, have that same delightful softness of full-blown fantasy, despite the metallic hardnesses and resilience.

There is an elaborate comedy in the scene - even something grotesque in the way in which the works seem to approach the viewer with their offer of metallic alms. The urgency of these gawky figures' pursuit is delightfully captured in Soft Block where one leg of the tripod is shackled in its apparent perambulations by a minute ball and chain. This, we feel, is the work which will seek us out like some indefatigable street vendor. 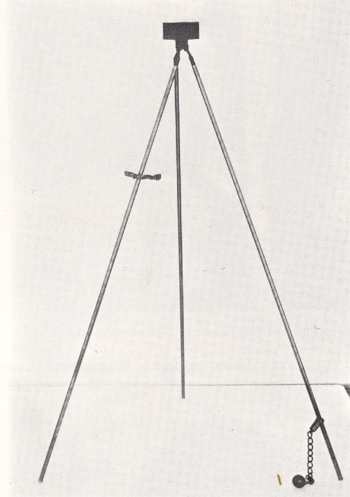 But if the fantasies seem to pursue us in the Three-Legged Race 1980, what needs to be recalled is that, like Ball, Twiss achieves his highly animate images with materials that commonly claim or inspire no fantasies. The component rods, brackets, clamps, screws and so on seem only to demand a use and not a dream. But then that is Twiss's nicely accomplished point. We are too accustomed to classifying aspects of life in terms of certain materials.

The seven smaller works of the exhibition can be amusing, but they lack the impact of the crippled creatures which stalk the gallery. And Twiss is perhaps too content with the now conventional teasing of expectations within the tactile range between softness and hardness. Twin Screws, for example - a plump bronze cushion button-backed with two screws - has a bijou air, which is cunning as ornamentation for the tripodal works, but too coy for a single piece. It is rather dismaying that, with these small works, Twiss seems to have lost confidence in the grand sculptural gestures evident in the larger works. Like fantasy, art can afford the grandest gestures, and one seeks no less from artists of the calibre of Derek Ball and Greer Twiss.