1980 marks the Centennial of the Canterbury Society of Arts. The notable achievement of running up one hundred years of exhibitions great and small was suitably celebrated with an anthology of works by painters who in some significant way had been associated with the province. This was a crisp, businesslike show full of promise for the future. The angle wouldn't have pleased those who believe that the highest values of art reside in certain highly specific styles of painting, but there was a sense of quality throughout.

It was as if a widespread family had come together for the cerebration, with conservative oldsters, confident middle-agers and radical youngsters co-existing good-naturedly together to honour an elderly relative. The C.S.A. has changed greatly from the conservative body which dominated Canterbury art for so many years; but it still suffers from the legacy of a social set image thought by some artists to be less than serious. The truth is that the C.S.A. in its spacious twelve year old Gloucester Street premises offers facilities for one man shows that must be unique in Australasia. There are six separate exhibition spaces in the building and those areas are filled with exhibitions for most of the year. It adds up to a lot of shows and many of them must necessarily be less than lively.

What critics forget, are the good tough shows that otherwise could not have been seen in Christchurch. Billy Apple's empty room, Andrew Drummond's crucifixion piece, and many advanced one-man shows, have been welcomed by the organisation which is the only one of its kind in Australasia with a full-time professional director and staff.

At the Brooke/Gifford Gallery Trevor Moffitt unveiled forty paintings - the fruits of a concentrated stint of fulltime painting made possible by a Queen Elizabeth II Arts Council Grant during the first six months of this year. 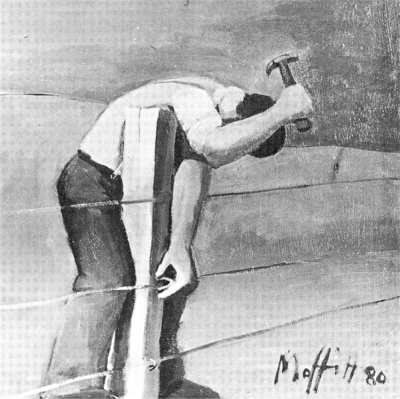 The series, carrying forward Moffitt's painted biography of his father, Gilbert, began five years ago. Images describing a man in his prime, fit and hardened by labour, are like stills from a documentary showing the physical nature of life between 1920 and 1950. The exhibition makes it clear that these personal remembrances of Moffitt's father are his way of exorcising the memories of discord between the two. From the vantage point of middIe age Moffitt sees more clearly and appreciates the values and attitudes that motivated his father and which the youthful artist rejected.

In some of the paintings, khaki clad boys, Gilbert Moffitt among them, depart on troopships for the war. Other images depict rabbiting, fencing, tree felling in the bush and playing rugby or cricket. The colour has a fresher warmer ring to it in contrast with the cooler grey tonalities of earlier works.

The Art of the Icon

With the arrival of the magnificent Wijenburgh icon collection, Christchurch joins a select band of cities able to present major international exhibitions of rare, precious art works. For the past year the McDougall's director, Dr T.L. Rodney Wilson, has been overseeing the installation of the gallery's temperature and humidity control in anticipation of the icon exhibition and later the Thyssen-Bornemisza collection.

The icon show is compellingly beautiful and fascinating. To New Zealand eyes these austere images are strange and mysterious, totally outside our brief tradition. They are familiar only to a few specialist scholars and enthusiasts as an arcane art form occupying an historical niche somewhere between Eastern and Western art. 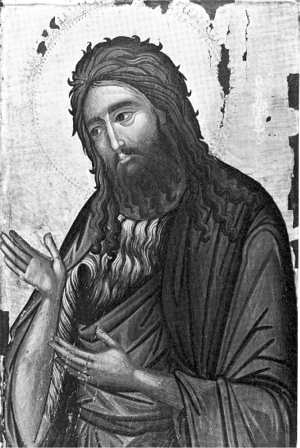 The fact that the icon painters were able to hold the attention of their viewers while narrating the stories of their faith was brought out by the first visitors to the McDougall exhibition, who pressed closely to the compact images to study their detail. If an image was to be hung some distance from the congregation, perhaps in a dimly lit church, the icon artists had a bold poster-like treatment that allowed the image to be 'read' from a distance. The Mandylion, a likeness traditionally held to be imprinted upon a linen cloth when Christ pressed it to his face, was a stylised way of depicting the appearance of the Saviour. An example from the Novgorod school in the exhibition was a wonderfully simplified form that transfixes the eye at twenty paces, projecting an awesome sense of spiritual power.

Splendid decorative relationships of colour and pattern add to the rich beauty of the icons, often enriched further with gilt and enamel. Occasionally Western influences intrude in the strict conventions. Theodorus Paulakis's rendering of Joseph, Viceroy of Egypt, is all Baroque flourishes and theatricality, although its perspective still remains that of God's elevated viewpoint from the centre of heaven, an immutable law of icon painting that infuses the works with their own special sense of space. There is more nourishment in this stunning exhibition than can be discussed adequately in the present article. The show should not be missed as it proceeds on its tour.