Pablo Picasso : A Retrospective is the catalogue of the most ballyhooed exhibition of the century : the Picasso retrospective at the Museum of Modern Art. Fortunately, the book, like any good catalogue, is more than just the record of an exhibition. Its most impressive feature is summed up by William Rubin as follows: I have attempted to communicate ideas about Picasso's development through the juxtaposition of particular works ... The layout ... aspires to a kind of art history without words.' As much is obvious from the fact that the sections of the book, divided into years, become shorter and cover longer periods as Picasso's Iife and creativity waned.

But more importantly, in practical terms, Rubin's method means that for such masterpieces as La Vie, Les Demoiselles d'Avignon and Guernica (as well as many other works) we are presented with several, always extremely informative, preparatory studies. Rubin also places together distinct works which function as contexts for each other and may be mutually illuminating. The juxtaposition of the painting Still Life with Deer's Skull, the assemblage Head of a Bull and the bronze and copper sculpture Death's Head, for instance ' tells us as much regarding Picasso's feelings about vitality and the fact of death as any page of text could. 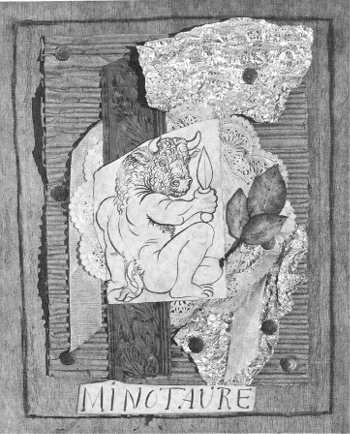 There is no text, as such, in Pablo Picasso : A Retrospective. There is, however, a valuable expanded chronology, illustrated with a variety of family, progress and other photographs. (Notable among them is one of Brian Brake's well-known photographs of Picasso and Cocteau at a bullfight.) The chronology also includes reproductions of some important works which were not or could not be in the exhibition, like the lithograph Visage, and Picasso's costumes for the ballet Parade.

One of the few complaints I have about this book is that the chronology has been carelessly edited - presumably because, with an enterprise this large, something had to go wrong. This carelessness has resulted, in repetitions of several facts. We are told on two occasions, for example, that Picasso's original design for a monument to Appollinaire was rejected as too radical. It is a minor flaw which is only the more noticeable because of the generally high quality of the book.

In this respect, I was also disappointed to see that there was no index to the reproductions. For over 750 works this would have required several pages: but that would have been better than no index at all. As it is, even with an approximate knowledge of the date of a work, there is much flipping back and forth.

There are omissions from the Picasso oeuvre. La Soupe and Young Girl on a Ball are two works one might have expected to see reproduced. But given that the editor was almost completely restricted to works available for the exhibition it is surprising only that there are not more omissions. On the other hand, some well-known works in the catalogue were not in the exhibition. Several paintings which were to be lent by Leningrad's Hermitage Museum (among them The Dryad and Three Women) were withdrawn by the lenders as part of the aftermath of the invasion of Afghanistan.

Nevertheless, this book may fairly be called the definitive affordable single volume of Picasso reproductions. If it is not so by virtue of containing every major work, it is by virtue of printing enough examples of all the branches of Picasso's work to enable us to follow their almost infinite variety through all permutations. When all is said and done, that is the best thing the book has to offer: the encyclopaedic twentieth century genius of Pablo Picasso.