The Unauthorised Version is more a history of New Zealand in cartoons than it is a history of cartoons in New Zealand. This is a pity: for while the history of our country has already been well-researched and written about, this is the first full-scale book dealing with New Zealand cartoons; and there, I feel, is where the emphasis of the text should have lain.

History is badly-served here. The brief two-page surveys of the main events of each cartooning period seldom tell us anything we do not already know. Grant might reply that these are meant to be no more than information essential to an understanding of the cartoons relating to each era: but, even so, his summaries often fail to give the right sort of information.

The following is just one example of many cartoons whose point still remains a mystery to me: Sir Joseph Ward is shown riding a donkey (the Liberal party) toward the 1917 parliamentary session. Ward is leading the donkey on with a carrot labelled 'Portfolio', and there is a one-word caption, 'Dope'. Grant's explanation for all this is: 'Sir Joseph Ward, who preferred government to opposition, served as Minister of Finance throughout the coalition period'. A more directly relevant explanation - that is to say, one which would actually explain the point of the cartoon - might have been pedestrian, but at least it would not have been obfuscating. Other examples of this sort of carelessness - all equally frustrating abound. 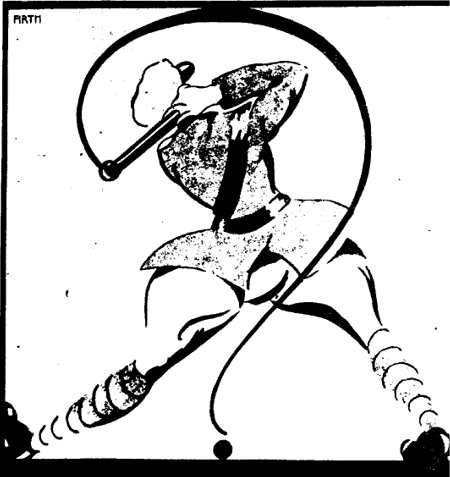 Cartooning raises important questions of point of view: a question which is more problematical in New Zealand than in other countries, where violently differing opinions raise passions and can keep them high for years. Although there are isolated instances of this in New Zealand, because of their rarity such divergent thinkers are seldom in a position to be able to express their views via the publicly effective medium of the cartoon. Sir Gordon Minhinnick may say in his foreword: 'experience suggests that a political career can be advanced considerably by a few well-placed cartoons' (arousing a still unfulfilled curiosity in this reviewer); but any suggestion this may contain that Minhinnick and his colleagues are cartooning Davids holding political Goliaths in thrall is gainsaid by Ian F. Grant's description of cartoons between 1950 and 1972: 'There was little bite to most of the cartoons because Labour was in power for only three out of the 22 years and newspapers were loath to lampoon the party they supported.'

One notable point about the New Zealand cartooning tradition is that its elements are almost entirely derived from the work of cartoonists overseas. While no other country in the world can have produced so many cartoons about farming, what we find in this book is not so much a tradition made in New Zealand but something which is a tradition de facto by virtue of its taking place in this country. Plucky little New Zealand confronting the rest of the world, or the encroachment of increased government regulations into the lives of individuals, are two themes whose development may be traced over many years but whose actual treatment has many parallels in the work of overseas cartoonists. Even the noticeable change which enters in the 'seventies with Bromhead, Brockie and Scott reflects nothing so much as a shift in stylistic allegiance away from the English school of Giles or Punch toward the blacker American tradition best known through the work of Ralph Steadman and Jules Feiffer. Unfortunately, as is often the case, this is something which is only hinted at in the text of the book, although materials for an examination of it are present.

Grant notes one interesting theme which runs through the history of cartooning in New Zealand - one which casts an interesting light on the national psyche: this is the cartoonists' continued inability to invent a national archetype. The most successful has been Minhinnick's Sam, who is notably nondescript.

What does The Unauthorised Version offer to the reader more interested in the wider spectrum of the visual arts? All too little; but the blame for this rests not with their historian but with the cartoonists themselves, whose draughtsmanship and sense of pictorial structure is often crude (with little compensating vigour), or at best conservative.

Trevor Lloyd's work, which first appeared at a time when both cartooning and national identity seemed to be coming of age, stands out from that of most of his contemporaries. His work is less literary than theirs -it depends less on establishing a satiric and dramatic situation or on clever word play. It would seem that his cartoons generally began as visual conceptions and this distinguishes him. He shows a more vivid, almost eccentric, visual imagination than many cartoonists, before or since. All this is augmented by his considerable draughting skills, which were also evident in his popular and quirky etching-too original to be twee, too deliberate to be kitsch. Lloyd is certainly unique in the annals of New Zealand cartooning and his originality is amply attested to by the continuing appeal and freshness of his work.

A more surprising artistic discovery is the enigmatic Firth. Grant has no biographical (or other) information to offer about this person, who is represented by just two cartoons from the New Zealand Samoa Guardian satirising New Zealand's mismanaged administration of those islands. Firth's style is best described as minimal Art Nouveau. It is characterised by a highly rhythmical line and an imaginative use of distortion, always subordinated to good satirical effect with no loss of elegance.

Kennaway (Kennaway Henderson, editor of Tomorrow) was, on the evidence of this book, an original and eclectic draughtsman whose savage radical caricatures draw on traditions ranging from Aesop to the eighteenth-century broadsheet. The case of Kennaway tempts one to think that to really hurt the establishment it was necessary to start one's own magazine.

Cartooning is above all else an occasional art, and the pressures of deadlines explain why cartoonists are generally more concerned with the occasion than with art. In this country, as a rule, they have been aesthetically as well as politically conservative.

Since Kennaway, there has been no really aesthetically interesting cartoonist apart from Bromhead. Bromhead is a difficult cartoonist with whom to come to terms. By being able to show only the best of Bromhead this book does not give the whole picture. As regular readers of The Auckland Star will know, he scores far less hits than misses. The points of his jokes are frequently either laboured or obvious, and his technique may alienate one not from the subject of the cartoon but from the cartoon itself. When he is good, however, Bromhead is excellent, and his technique plays a large part in this. Obviously he has refined it to the minimum necessary to convey his point and (when the point is worth the effort) this gives his work a forceful and immediate impact. Other cartoonists might have thought of the joke behind Rangitikei Handicaps: but they would have drawn unnecessarily meticulous caricatures of the three figures represented. Where there is anything extraneous there is neither effective art nor good cartooning.

My final complaint about The Unauthorised Version is probably the most important in its implications. Grant's book is by no means an 'unauthorised version' of our history. He himself says that the national newspapers have constantly repressed radical criticism of the status quo. On the contrary: New Zealand cartoons preserve the safe official myths - that, for instance, of 'King Dick', whose appellation began as one of contempt but was transmuted over the years into one of affection; or the myth of cunning and conniving Rob-whose machinations are seldom shown doing any real harm. This characteristic of New Zealand cartoons is exemplified even more clearly by the caricatures therein which (with the exceptions of Kennaway's and Brockie's) have been more concerned with their own cleverness in rendering a recognisable likeness than with creating a distorted likeness as a visual metaphor for specific satirical criticism of the subjects portrayed.