Women in the Arts

Forty women working in and around Auckland contributed over seventy works to this exhibition - whose stated aim was to give support and encouragement to women artists, many of whom find themselves 'isolated from the general stream of communication and exposure'. In this aim it must undoubtedly have succeeded. Whether, as the organisers' note on the exhibition suggests, it could have answered any questions about the nature of 'women's art' (or indeed the existence of such a phenomenon) is another matter. The diversity of subject matter, technique, approach and scale in the works exhibited makes the drawing of any such conclusions virtually impossible; one can, however, isolate certain qualities recurrent throughout much of the exhibition. 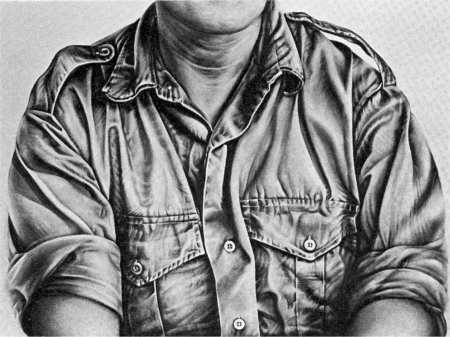 The three Wellington women who selected the works (Janne Land, director of Galerie Legard, painter Barbara Strathdee and printmaker Vivian Lynn) commented on 'the intuitive use of colour, the emotive element in content, the honesty in the use of tools and materials and the pure joy coming from the involvement in the work'. To these I would add the absence of pretentiousness and self-indulgence; and that concomitant of 'involvement in the work': energy. This exhibition had more vitality and energy than almost any other I've seen of late; and in this respect the work of some of the better established artists in the show came off less well than one might have expected. Marte Szirmay's undoubtedly skilful sculptures seemed less striking than usual in a room bursting with colour and life; Philippa Blair's Skin Mat and Victoria Edwards's large fabric-and-paint collages were not so exciting beside the freshness and Iiveliness of many of the other works.

The exhibition lays to rest, without a doubt, any lurking suspicions that most women are still painting pretty flower pieces or wishy-washy landscapes 'like a lettuce salad dying', A few 'flower pieces' there were certainly: but Ruby Huston's oil Greenhouse II and Juliet Batten's watercolours Roses No.3 and Roses No. 6 were very different from any 'faint lady' stereotypes in their skill and intensity; and the latter in particular displayed a free and assured handling of the medium. The only pure landscapes in the exhibition were Lois Mcivor's Orange Tree and Mid Earth. These small oils, with their dark, rich, glowing colours and their softened and blurred outlines, conveyed an almost magical quality, a sense of inner vision that was far more than a 'pretty peep'.

Not surprisingly, a number of the artists found their subject-matter in the everyday clutter of domesticity that informs the lives of so many women. The most conspicuous of such works was Juliet Batten's Inside/Outside. Described as an 'installation', it consisted of a playpen surrounded with a litter of household objects, children's toys, newspapers, comics, etc. Inside the playpen were a number of objects, of rather obscure identity, but obviously carefully chosen. and carefully placed. To my mind this was a rather contrived work with a very obvious message and was not particularly successful. More pleasing were Bonnie Quirk's etchings Ball of Wool Larger than Life and Knitting with Dropped Stitches, in which the wool seemed to have all too much life of its own! Likewise in Althea Whillans's unassuming pencil drawings rubber gloves appeared to have invisible hands inside them; an electric cord snaked its way quietly over a table edge. 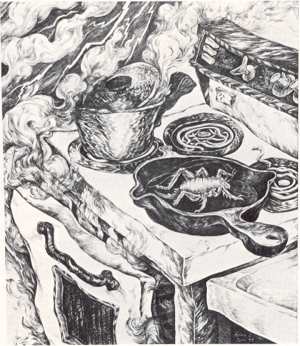 Most unforgettable, however, were Sylvia Siddell's tortuous, detailed, intensely black and white pencil drawings which reveal her own peculiar vision of a macabre, domestic malignity. Poor Chook is a little naked lady huddling defencelessly inside an electric frypan; in Dirty Oven streams of filthy smoke coil malevolently around a kitchen stove; a gnarled and knobbly finger lies severed by a meat cleaver, ready to join the rest of the ingredients in Finger Pie.

As I've already mentioned, the variety in this exhibition was very wide, ranging from large scale paintings such as Annette Isbey's monochromatic 'close up', Shirt, and Sally Griffin's exuberant yet touching Dance of Death, to photographs by Gil Hanly and Diane Quin; from the primitivism of May Ropata's paintings, notably Departure and Portrait, to the sophistication of works such as Ruby Huston's Homage to Magritte drawings, and Cathryn Shine's lithographs; from Diana Lee-Gobbitt's horrific vision Dream for New Zealand to Heather Grouden's amusing terracotta figures.

There were many other works worthy of comment - Carole Shepheard's dynamic Life Force paintings, Allie Eagle's watercolour Self Portrait - too many to mention them all. This was an exhibition that revealed a wealth of imagination, talent and skill and proved that women are as; important as they have always been in the New Zealand art scene.