Art and the world of diplomacy have a rather uneasy rapport. Although it is central to the interests of a national embassy to display its native art and artefacts to a foreign public, the diplomatic dimension of those interests can too readily depress the aesthetic.

Neil Dawson and Pauline Daly, for instance, in their recent joint exhibition of sculptural works at the Embassy of New Zealand in Washington, D.C., confronted problems of organisation, installation, display and publicity which would not have occurred at a professional art gallery. This somehow seemed to increase the determination of each artist to get things right, or as nearly right as possible.

Dawson and Daly, were representing the Queen Elizabeth II Arts Council at the Xlth International Sculpture Conference in Washington. Both artists have their roots in Christchurch (though Pauline Daly has just completed a course of art study at Yale University) and their exhibition had a strongly Christchurchian flavour, insofar as both artists employed as their artistic focus the magnificent Embassy building designed by the Christchurch architects, Warren and Mahoney. 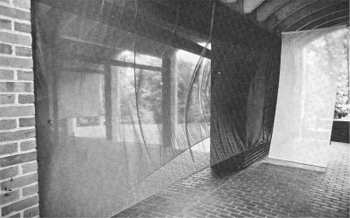 If it were a coincidence that both artists selected this focus, then it was certainly a nice choice to juxtapose their individual aesthetic responses in one exhibition. Against the minute, meticulous, highly interiorised constructions of Neil Dawson, Pauline Daly's celebratively exteriorised banner installation was stunning.

Dawson's twelve sculptures, entitled Here and There, were concerned, as the artist put it, with 'the interception of vision and Iight rays'. The effect is cultivated by the use of primarily conical constructions in piano wire and shade-cloth, with the recurrent cut-out or mesh motif of the unusually-arched, brick-built windows of the Embassy.

The works are complex to a degree of intensity which, in my view, makes Dawson outstanding amongst his New Zealand sculptural contemporaries. Too often high complexity degenerates into an excessive over-determination. While, with one or two of his untitled pieces, Dawson did indulge in over-determination, it is otherwise quite remarkable how, on so small a scale, he achieved a multiplicity of structural determinates each with a distinct aesthetic contribution to make to the over-all image.

The conical forms immediately invite the eye inside the pieces, but, once inside, the overlays of shade-cloth meshes and cut-out angularities create an absorbing, if disconcerting, multiple spatiality. Constantly one finds oneself drawing back from the works to discover a point of re-entry which will comprehend the inner complexity. But there never is one. To say of a sculpture that one can never exhaust the perspectival approaches - and never wishes to - is to make the very strongest claim possible for its aesthetic impact. 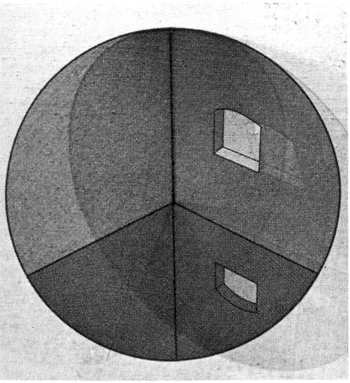 The spectator's obligation to constantly reposition himself was also a feature of Pauline Daly's installation of a series of vividly-coloured polyester fabric screens and enclosures around the Embassy patio. With Daly, this obligation is caused not so much by internal complexity (for her component forms are simple) as by sheer spatial extension. In Dawson's work the object within one's field of vision is totally circumscribed. Pauline Daly, on the contrary, seeks to prevent the spectator from finding any single circumscribing field of vision. The spectator is, at any point of access, physically within the installation, and cannot - such is the structure - draw back to command it in a single view. The slightest move to left or right reveals a new constellation of bi I lowed depths, step-through apertures in the screens, and an altered chromatic translucence.

Whereas Dawson's works are very much for the mind's eye - for reflective visuality - it is, as it were, the body's eye which Daly cultivates - a physical, kinaesthetic visuality. One feels caught in a maze or web where everything remains open. Yet we cannot physically negotiate that openness. Such is the aesthetic irony of Daly's work.

Both sculptors needed light to render fully the presence of their art. And it was a shame that inadequate lighting made their works more fugitive than they need have been. An important dimension of Neil Dawson's work, for instance, ought to have been the shadowing and shading cast through his pieces. This, however, was too vague in the weak lighting and against the dulling, and very much ad hoc, nature of the screens on which they were mounted. likewise the patio lighting for Pauline Daly's work failed to illuminate the chromatic overlays of what is, I think necessarily, a night installation, to be contemplated in solitude. A grey, storm-derelict Washington early morning-and by then to some extent a storm-derelict sculpture - tended to obscure the essential qualities of the work. The previous evening they had been obscured by a large crowd of englassed and ensnacked diplomatic luminaries.

There were some five hundred sculptures scattered through Washington during the International Sculpture Conference, so New Zealand's contribution was numerically minimal. Aesthetically, however, it was far from minimal. To be sure, one could observe, with pleasure, the works of a number of sculptural mandarins such as Hanson, Kienholz, Nevelson and Beuys. But otherwise, with a few, mainly European and Canadian, exceptions, the work of Neil Dawson and Pauline Daly seemed to me undoubtedly to outmanouevre in image and style the majority of unrefreshing works on view in Washington. In claiming that, there is the risk of partisanship: but it is a small risk in recalling the countless, 'sixties-bound sculptures offering only reduplicated and impoverished reflections of David Smith and Anthony Caro. (New Zealand Embassy, Washington D.C., June 6 - 23).