I write this letter in grim determination as such are not many now for replies are not looked for as letters are few. For two days now or more I've been fuming and fffting trying to do a construction. Now this is the climax: here it is evening and nothing to show for the days of worrying, so as light relief even if a letter is a fluke and a fallacy I sit down and write one in grim determination to show that at least I can conquer something besides food, so I sit down and write this in grim determination to show in some manner of speaking my life is my own in a few ways apart from being dominated by the uselessness of trying to do a construction I can at least brace my shoulders and sit me down to write a letter now in grim determination be it to whom it may be Norman(2) I think as more than likely I did not reply to his last letter to me so long ago. 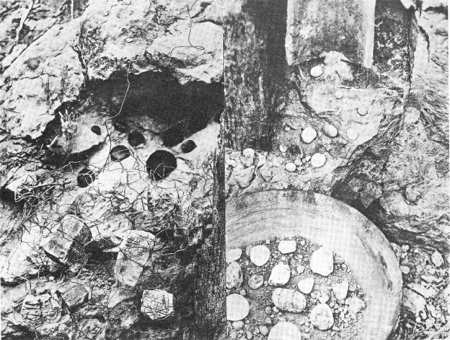 It is strange but it has also always been so that before getting anything right I have had to stew and stink for two or more days under the domination of a construction, and so tomorrow when I feel good I'll think now is the time to overthrow the domination and dominate it myself, that's how I felt early this morning but no here is the whole day gone and not one twig lifted toward the completion of my construction so here I'm sitting down in grim determination to write a letter in a show of pure nonchalance to everyday Iife and I would it were also a nonchalance towards constructions but not so, even now as I write in grim determination I feel the domination of that uncompleted and unstarted construction waying weighing wheying and no curds Kurds turds birds what are they to me now bats mats cats ha ha nothing like a madman I writhe under my domination Dominion status what is that ha ha nothing out in Africa perhaps it may mean something but in Africa dear old Africa great sweet sweaty noble Africa no one beneath your muggy skies moans and growns groans and bones foams and spermatozoas for the sake of constructions conscructions escrutcheons confuctions I'm sure but ha when I have done my construction no man will feel more than I but all I have left just now is to sit with grim reluctance determinedly writing this letter to spit in the eye of domination. All this might have been different had the construction been completed I would have been young and blithesome won some havesome but not now I am wan grim and an ugly sight to look upon. God knows what the construction is to consist of as yet I do not ha who knows who cares I give my madman's laugh a laugh from one side of the mouth then draw it back with the other side all to no avail kismet grimly I write on to whom I care not Norman I think little can he know about dominating constructions ah sweet young Norman carefree as the Africana fungus is long ah youth ah fate ora pro nobiscits it is little you know of the domino of consts. the lure of consts. the gripping hold of or the power of consts. yet over all this I have still to write and complete this letter it seems never to get anywhere nearer completion no matter how grimly I may write on and on plodding to complete it against the domination of my as yet unstarted construction.

Jane's dropping you a line Eric me too.(4) Here everything is good, how is all your way? There are many things here unequalled -plants, rock formations, shapes of twigs, pebbles on beach. Sun is good, so is clear daylight and nightlight to say so. Mountains their own textures, a good stream below and trees with their own balance about them. Here one could easily go on forever choosing arrangements of fissured rock, plant or water-flow or whichever, then to take cement, wire, wood or whichever and make a construction of the natural formation to define its exact whatever, and that takes insight. I was just now reckoning anyone can look at a landscape and faintly realise its whatever, but it's another thing to make a record not of the landscape but of its whatever that is not counting quality of paintor photography. Jane very happy here and just now it's springtime. I'm feeling fit as usual and learning a lot of brand new insights. The rocks and other things, they are certainly always there timeless and it's not until some insighter comes along that they have any whatever, and then the only whatever they have is in relation to human mentality missing out animal and Freudian stuff. Then the job is to record their whatever not by a photograph or painting as that's only a someone else's record; and countless times they have been seen by others but nothing like recorded, and the chances are they couldn't ever be like that. Well then, take cement and arrange the rocks or whichever sufficiently or insistently to define its relationship to the human mind or, a better word, to God - and in saying God I don't mean Jesus but living gods or not even, I mean the material that is alive free floating and causes gods or not even and the only outside contact with that is the insight of a mind directed onto outside phenomena. Now to talking ordinarly about such things as paint which is a means not even a medium - and I like means as being no trouble or even better being brilliant trouble in arrangement. But not too much as that's the thing that is likely to only end in itself and not in the whatever of the arrangement as to God- by God for God yes no God. And if the whatever comes first how then can the brilliant texture or sombre this and that of the paint? Well there are lots of other things such as movement which is not a means or a medium or a thing in itself, it is absolutely nothing or everything, ask any electron, atom or molecule, light, sound or any vibration mental or otherwise - the answer is yes no. So movement needs all the insight possible and insight is the opposite to science and the angle against philosophy and it comes first in importance to anything except God; so religion comes last. Well Eric, it's time to say amen or hallelujah, so both.

Len Lye's design
for the title page of
An Acquaintance with Description
by Gertrude Stein,
London, Seizin Press, 1929

1. Seizin Press, Deya, Majorca, 1930.
2. Norman Cameron, poet and translator of Rimbaud.
3. This letter, written from Majorca where the Lye's were staying with Robert Graves and Laura Riding, is to the sculptor Eric Kennington.
4. Jane is Len Lye's first wife.