It really got underway in 1974. Peter McLeavey, Ray Thorburn and others were floating the idea around of a retrospective exhibition in New Zealand of Len Lye's work, or the possibility of a kinetic sculpture commission. Bob Ballard, the then director of the Govett-Brewster Art Gallery, suggested to our committee that perhaps the gallery could become involved in a Len Lye exercise. I recalled seeing some years earlier a colourful maverick Len Lye shaking pieces of steel in the film When the walls came tumbling down; and to me the concept of such a work displayed in the Govett-Brewster with its high studs, sheer walls and acoustic qualities, together with the idea of working with such an artist outside the mundane concerns of conventional engineering (for which I have little interest) was appealing. 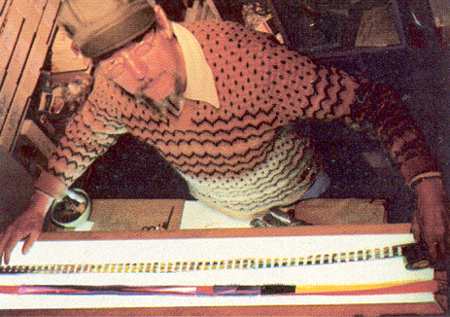 Len Lye
working on a film
in his studio

Len had asked for 'a genius engineering designer and technical motion programmer'. I had no illusions of fulfilling that function, but felt that with his knowledge of the art we would somehow get the act together and carry it off. I volunteered for the job and in mid-1974 we met in New York. To my relief we found immediate rapport. (We discovered that we both had the same New Yorker joke on our walls "two rats in a laboratory environment, one talking to the other saying: 'Boy have I got this guy conditioned - every time I press this bar down he drops in a piece of cheese I) The relationship developed into a continuing close friendship. We worked hard on Len's kinetic concepts and he was great to work with - plenty of humour, anecdotes and an extraordinary imagination. I had trouble on occasions keeping to the projects themselves as we wandered off into the realm of Temples and myth, slide/ tape shows on art and the genes, films and concepts for tomorrow in which human values and individuality were the criteria. Len was brilliant with materials: he would pick up a piece of metal, shake it, twist it, listen to its resonance and look at its motion behaviour. I found to my surprise that he had little knowledge of engineering: but a deep intuitive understanding of a material's properties. 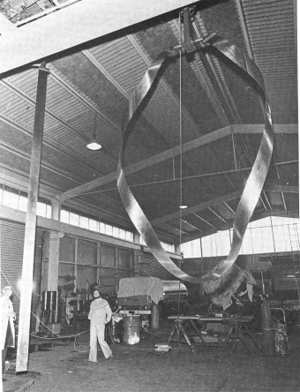 I returned to the Govett-Brewster with the proposal that we should construct two works based on Len's studio models: Trilogy (A Flip and Two Twisters), to be about 3 metres (10 feet) high, and Fountain, about 2 metres (7 feet) high. The Govett-Brewster Art Gallery Committee agreed; the New Plymouth City Council supported the scheme, and the Queen Elizabeth II Arts Council agreed to share half the estimated direct costs of $18,000 - a low price for the project because of the voluntary contributions to be made by many individuals, companies and organisations involved. I then returned to New York to confirm exact dimensions with Len.

That second visit however was very worrying: because Len, in his inimitable way, had expanded the project to a much grander scale. Over rum and orange juice in his Greenwich village fourth floor studio he presented a concept of substantially larger kinetic works - a Trilogy in which the two twisters were to be 7.6 metres (25 feet) high; Flip scaled up accordingly; and Fountain with 4.6 metre rods (15 feet) - not too large to make you feel insignificant, but certainly large enough to gain your attention, respect and zing your senses. The Gallery, with its incoming director Ron O'Reilly, and the Queen Elizabeth II Arts Council, rose to the challenge and approved direct costs of $25,000. 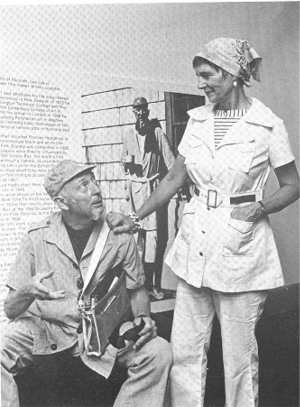 The kinetic engineering design problems with Trilogy were difficult to resolve. The Canterbury University staff assisted, and reported that our requested criteria were mathematically insoluble. So we built, in New Plymouth, a full scale prototype and ran a series of tests, with changing parameters over six months to determine the required design criteria. Following this, the design and build of the work itself got under way. Fountain was somewhat simpler, and was a pleasant psychological balance with the challenge of Trilogy.

A part of Len's genius with his kinetic work was in his understanding of scale and his sensitivity towards energy. With Flip, Twister and Fountain, the materials used were very sophisticated, high tensile stainless steels; the power sources equally sophisticated, very small fractional horsepower electric motors. There is a large degree of interplay between the works and their motive force.

The exhibition, mounted with the assistance of John Maynard, opened to the public on 5 March 1977 with Len and wife Ann present: Trilogy, with its strong male/female polarity - the two Twisters shaking the hell out of you and Flip sublimely seducing you; and Fountain: a gentle peaceful work with a lovely tinkling sound - soporific if you're in that mood. The exhibition also incorporated some of Len's films shown in a theatrette; Blade, a further kinetic work on loan from the artist; and other memorabilia.

There was some prior concern over the artist's acceptance of the work, which had been built substantially sight unseen. In Toronto some years earlier Len Lye had ordered the destruction of one of his works, Wind Wand, which was to be a centrepiece in a World Trade exhibition. The work had not been built, in one detail, in accordance with his instructions and it was taken down and demolished. Len, however, was delighted with the Govett-Brewster effort and there was great relief all round. The idea of Len's collection being transferred to New Zealand was promulgated at that time and negotiations to achieve that situation commenced.

Since 1977, Len produced, or completed unfinished work, with the assistance of many individuals. A mass of material - the conceptual design of further kinetic sculptures including a 76 foot high Wind Wand - was completed. With a grant from the New Zealand Film Commission, his Brussels film festival award winner Free Radicals was reedited; and with a Fellowship from the Queen Elizabeth II Arts Council, a further film, Particles, was completed. A major part of his thesis in life was the evolvement of individuality, identity, values, the genetic transfer of information, myth and the science of what is now given the handle 'sociobiology'. He had for over 40 years amassed considerable information to support his concepts and in the last few years developed a series of slide/tape presentations together with other written material on the subjects. 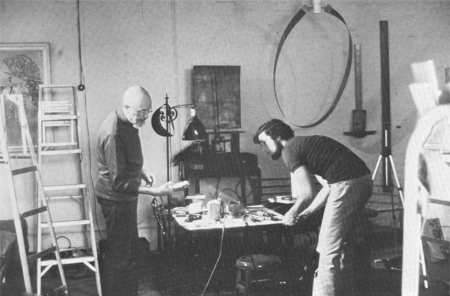 Len Lye and
John Matthews in the
New York studio, 1974

I found his exuberance boundless ('I don't have time to get depressed'), his 'New Brain' (his academic intelligence) full of lateral thinking, global and beyond into the twenty-fifth century; and yet all of this was hooked into his (as he would put it) old brain - full of genetic information from generations past. He was colourful, highly individual and had a great personality. Ann provided a nice balance and strong support to Len. A strikingly attractive, colourful, strong-charactered and well-humoured individualist in her own right, she contributed a very intelligent management side to their lives.

The Len Lye Foundation, funded by a $20,000 grant from the Minister for the Arts, Alan Highet, has been established under a Deed of Trust to acquire by way of gift from Len Lye the majority of Len's work - films, sculptures, paintings, batiks, slide/tape works, written material, memorabilia and copyright. The Board of Trustees are required (amongst other things) to provide for the acquisition, conservation, reproduction and promotion of the works of Len Lye and to make facilities available for cataloguing and archival research. The Foundation is empowered to issue prints of the films (in so-far-as copyright allows), reproduce limited editions of the kinetic work (including newly conceived work), publish written works and promulgate Len's various theories. The Board of Trustees comprises The Director of the Govett-Brewster Art Gallery, (currently Dick Bett); a representative of New Plymouth City (the Town Clerk Kinsley Sampson); a nominee of the Minister for the Arts under consultation with the Queen Elizabeth II Arts Council, (currently Hamish Keith); Ann Lye or her representative (John Maynard); the present writer; and two other trustees yet to be appointed by the Board. In the meantime, Len Lye's original film stock is being restored by the Museum of Modern Art, at its own considerable cost and in honour of the artist: the Foundation will receive master copies for printing purposes. The rest of the Foundation's works are to be returned to New Zealand for proper storage, for restoration where required, for archival organisation, research, publication and exhibition. A large number of the works will be displayed in the forthcoming Auckland City Art Gallery Exhibition.

The phenomenon that was Len Lye will certainly live on.