We had two kinetic sculptures (or steel-motion compositions as they are now called); about a dozen films: from his first, Tusalava, 1928, to his last, Free Radicals, 1958/79, premiered along with Particles in Space; automatic drawings ('doodles') and three batik pieces from the late 'twenties and early 'thirties; six small to medium-sized oils from the 'thirties and 'forties; and, for the first time on public show, thirteen large paintings, acrylic on unstretched canvas, from 1977 to 1979. This 'assortment' was accompanied by documentation that 'opened up' the context for viewing and experiencing the work - an audio-visual presentation of Lye's slides demonstrating his theories about the genetic basis of artistic creation; and a well illustrated catalogue with informative essays on Lye's films, painting and art-genetic connections; as well as biographical information, a bibliography and a short prose piece by Lye himself - Slow but Sure, 28 March 1980 - a signing off. He died on 16 May. 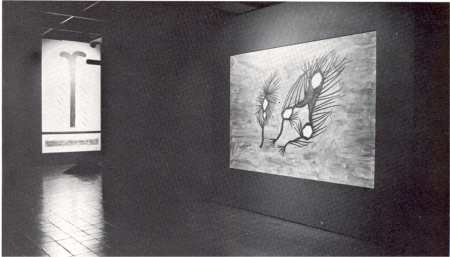 The Auckland Gallery's presentation of Lye's sculpture, film, painting and drawing did not simply comprise simultaneous and conventionally mounted 'displays' in adjoining spaces of objects in distinctive media. The shows operated more as a series of 'sideshows', which together made up an ensemble of 'acts'. Ideally this allowed immersion in the immediate physicality of the various 'performances' - spatially separate, yet connected by a sensory interweaving of sounds, lights, movements, shapes and energies given off by abstract film, steel in motion and spotlit paintings, each in its own alcove. To have meaning Lye's works require empathy, participation, not just passive and distant looking, from the exhibition visitor. To facilitate this the Auckland Gallery staff did a good job in their mounting of the show - although they could have done with more space to move in.

Much has been written about Lye's kinetic sculpture: so I comment only briefly here. His critics say that pieces like Blade and Universe, pulsating ellipses and swathes of steel plus planetary balls coming together and separating, are no more than entrancing, non-utilitarian mechanical toys: as so much kinetic sculpture has been (e.g. Tinguely). They are entrancing: but, provided the viewer can empathise, they work in profounder ways - as simple, visceral, yet elegant metaphors; or rather emanations of primal forces - 'hooked into' natural and cosmic rhythms in the manner of the 'primitive' art admired by Lye.

Lye's films, too, have been extensively researched and written about. What struck me is how good the early films still look. They are not just museum pieces, of interest only because of their pioneering role in film technique. One might have expected the films for the British G.P.O. in the 'thirties to have had built-in limitations ('The Post Office Savings Bank Puts a Pot of Gold at the End of the Rainbow for You' - Rainbow Dance). But Lye overcame this by using the commissions as opportunities for experimentation in film technique: for instance in new colour processes, in relating images to music, and in devices such as superimposition and solarisation that transformed live-action footage from the figurative into the abstract - all in ways that forty-five years on are still invigorating.

Nevertheless, Lye's post-World War II films are even better, more masterly. Free Radicals, I think, is the best of all, with its 'white ziggle-zag-splutter scratches on black 16mm film in quite doodling fashion' (Lye); its calligraphic lightning and dancing accompanied by African drum beats: like Blade and Universe, intended as a manifestation of primal energies - 'Old Brain stuff' (Lye) via twentieth century technology.

'Doodling', a means of digging deep into the sources of creation and creativity, was 'the most important exercise I did', said Lye. Most of his paintings emerged from this activity. It was the paintings that were the 'unknowns' of the Auckland Exhibition, since this aspect of Lye's art has hitherto received scant attention. The 'thirties and 'forties work generally fitted in easily with some of the going conventions and preoccupations of the European art world of that period. For example Ice Age 1936 features Klee-ish and Miroesque motifs and compositional and textural effects. And there's a well known precedent for Lye's doodling in the Surrealist (e.g. Masson's) practice of automatic drawing as a method of liberating the 'unconscious' (dreamtime) and thus, in theory, revealing deeper psychic and spiritual truths otherwise suppressed by the rational intellect. Not surprisingly, Lye's Snow Birds Making Snow, a lively painting still, in which the inspiration of 'primitive' art (pre-historic cave painting) and doodling were married, was exhibited at a Surrealist art show in London in 1936. (The Surrealists too saw primitive' art as a manifestation of primal, cosmic and psychic forces.) 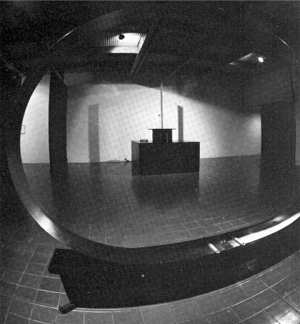 The big late paintings from New York 1977-79 are more problematic. While in terms of image most of them derive from earlier small doodles (e.g. Crustacean), or stills from films (Witchetty Grub from Tusalava), the combination of scale, mode of presentation and sustaining ideas separate them from successive aesthetic orthodoxies that have reigned in New York over the last twenty or so years. In Lye's theory the seemingly abstract forms of these paintings correspond in shape to phenomena in realms such as high energy physics, cell biology and blood chemistry - far from the usual hunting grounds of New York or New Zealand artists. According to Lye the 'correspondences' were arrived at intuitively, not scientifically, and thus demonstrate his ideas about genetic memory and the notion that knowledge of phenomena fundamental to life is encoded on our genes. So, following Lye's prescription, each painting, in the Auckland exhibition, separated from the others in its own little auditorium, was spotlit in black surrounds - like a slide projection. Theoretically this allowed the spectator/ participant to experience an intuitive recognition of essential truths of life and energy 'behind appearances'; in effect to encounter primal forces and forms emerging from the void.

The ideas are intriguing, the mode of presentation unique for painting. It's fine in theory: but do Lye's late paintings in fact work as intended? Intriguing ideas, novel and unconventional presentations don't necessarily make good paintings. Regardless of the artist's philosophy or aesthetic theory a painting has to work first and foremost as a painting - as something that has presence, resonance in itself: as an arrangement of colours and shapes on a flat surface. However much I admire Lye's inventiveness, his willingness to explore new territories, his ambitions, I do not think he was really a good enough painter to hit what he aimed at (in contrast to the way in which with film and sculpture he struck home). Some of the late paintings quite simply fall flat. The images are not effective: static in large scale, even though they may have worked either as small doodles or in movement in film. This is the case with Witchetty Grub, for instance, and with Ancestor (based on a doodle). The shapes in the doodle from the 'thirties, as Lye discovered twenty years later, were very similar to those of a fish called a coelecanth, a near ancestor of land animals. This furnished 'evidence', in Lye's opinion, of the workings of the 'Old Brain' and genetic memory - that is, he saw the doodle as an intuitive visualisation of knowledge, only discovered scientifically recently, about the origins of life. But Ancestor (and this is so for all of the late paintings that he relates to discoveries in physics and biology) came after he had made these connections with his earlier drawings and sketches. That is, the shapes and forms in the paintings (as distinct from the doodles) were not arrived at intuitively or spontaneously in the process of the pictures" making. Rather, they are calculated illustrations or dramatisations of his 'art-scientific' ideas. Nevertheless, Lye hoped that the 'knowledge' embodied in these images would be apprehended intuitively by the viewer. But I wonder whether it is possible for the intended 'meanings' of the paintings to emerge without some knowledge of Lye's theories.

Some of the late paintings do generate a fair amount of energy in and by themselves, without any recourse to literary, scientific or historical texts or explanations being necessary - Day and Night and Helium for example. But does that energy correspond to the experience Lye hoped for, or is it of a purely 'retinal' and 'painterly' order? It is the latter, I think. I've mentioned aspects of the late paintings that are strikingly unconventional, even unique in contemporary art. Nevertheless, there are other features that connect, some of them, to recent currents in American painting. For instance Lye professed a lack of concern for formal niceties - e.g. colour relationships, composition - and in works such as Rift Fish, Firedevil Leaving, and Ancestor the pinks, greens and blues are a bit 'yukky'; the inter-relationships of shapes and of parts to the whole 'crude'. In a general and milder sense these qualities bring to mind Frank Stella's work of a few years back, which so shocked formalist critics in the New York art world when first exhibited. There are some younger New York painters too - Jed Garrett for one - with a taste for 'tasteless' combinations of pinks, blues, mauves, greens, and for sloppy compositions and handling of paint. So maybe Lye in his late seventies, 'forever young', was right up with the times, and these are not 'great paintings', but effective theatre.

Whatever my reservations about the paintings the show as a whole came off well. All credit and thanks is due to the organisers, in particular to Andrew Bogle. Fittingly, Len Lye has perhaps sparked off a new beginning, a renewal of energies at the Gallery.