If we must reject the empty fetishes of 'The Eternal Feminine', or of 'Feminine nature', we must nevertheless recognise the fact that there are women, and that the fact of being one puts one into a special situation.
Sylvie le Bon, Studio International, No.3, 1977 Women's Art Issue

For one month, from 10 July, the National Art Gallery simultaneously held three exhibitions under the general theme of 'Women in Communication'. The idea was generated by a touring show from the Los Angeles Women's Video Centre, and then gained momentum when New Zealand photographers Gillian Chaplin and Anne Noble were invited to exhibit, and a collection of prints by Kate Coolahan, Vivian Lynn and Robin White was compiled from a variety of sources. Approximately eight prints by each were exhibited, spanning a ten year period.

The choice of these three lay quite simply in the Gallery's wish to highlight the seriousness, rich diversity of approach, and considerable achievement found in the work of many of our contemporary women artists. It would be a futile exercise to attempt to find a common female dialectic in their highly individual manners; yet perhaps there is some truth in the observation made by feminist art critic Lucy Lippard (in her book, From the Center) that women's art is often autobiographical in content.

White's regionalist formula was established early on; nurtured by an intense admiration for Cezanne and displaying a kinship with Rita Angus. From the humble church at Maketu, of which she produced a screen print in 1971, soon after completing art school studies, through to the more polished work of recent years, such as Mere and Stulolovao, Otago Peninsula (1978) - as seen in Art New Zealand 10 - she has built up a compelling repertoire of things seen and felt in her immediate environment. The landscapes, the people in her life-these are iconic images. They are presented frontally and directly, with the flat colours wholly suggestive of forms in depth yet unmodulated and locked firmly to the picture plane. 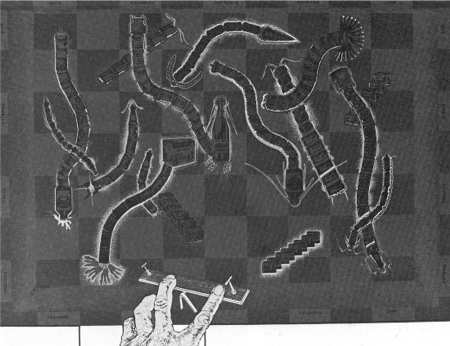 Equally exacting in her technique, Lynn has moved away from a preoccupation with painting in the last decade, towards a total involvement with the graphic arts. Her earliest work in the exhibition is Variation on Talme 2 (1970), a relief print from a series in which the individual works are uniformly dense and rich in colour (printed wet on wet). The abstract symbols, infused with molecular activity, suggest magical or cosmic forces.

Between this stage in her work and the recently completed Playground Series, Lynn spent a year in the United States, learning about colour viscosity etching as well as lithography. She became interested in the new wave of artists' books, commencing work on one of her own, which is due for release later this year.

The socio-political basis of Lynn's graphics also developed from this sojourn abroad. Concerned with the prevailing myths of our culture, which tend to militate against egalitarianism, she explained her standpoint at the time of the exhibition: 'I experience the life process as beautiful and awesome, and many socialising processes as absurd, damaging and to be working against human interests. The Playground Series of six silkscreen prints refers to these socialising forces and their effects, i.e. mechanicalness as opposed to awareness; illusion; fear; the use and misuse of competition and power'.

Each of the Playground images was evolved over a five year period (1975-80). Lynn fused the early preoccupations with an over-all grid structure and with organic forms (particular micro-organisms), to figure types, which are realistically drawn and set into a child's dreamscape of merry-go-rounds, see-saws and swings. Real-life incidents creep in at the margins. In Playground II, for example, the body of a child, future instigator or victim of a motor accident, is juxtaposed with that of a wrecked car. In Playground IV, the scenario derives from a game of snakes and ladders which is transformed into a chess-board of tiny sea creatures whose cellular bodies also serve as assembly lines of well known consumer products. 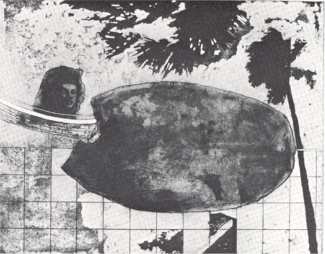 Kate Coolahan's intaglio prints are less overtly descriptive of social inequalities and mass culture. Their meaning is filtered through a sensibility attuned to broad cultural, religious and philosophical questions. Although her prints are technically brilliant, Coolahan's initial impetus is never lost sight of. She always explores her ideas through the process. By comparison, Lynn's screen printing technique runs the risk of serving merely as a formula to illustrate her complex narratives. Both artists have utilised photographic printing methods in the last few years. With Coolahan, fragments of familiar scenes and objects are embedded in a context of abstract forms and tonal nuances.

Greek Bread in the Pacific (1975) is a photo-etching with mezzotint. In a quotation supplied by the artist for use in the exhibition she explains that, 'Our pakeha culture, with its humanist democratic origins in Greece was facing a basic philosophical challenge from the great eastern traditions. I became aware of the' extent of this when my neighbour on a return flight from Britain turned out to be a missionary. He was not going to the Islands but to New Zealand, to save the pakeha christian souls who were sliding into the communal web of Buddha. The church itself has of course changed since then.'