Five 'potters', each showing five ceramic sculptures, presented a varied and stimulating, although not entirely successful, exhibition. One real problem was the I imitation of the available gallery space: the arrangement of the work tended to be crowded and the necessary improvisation prevented Parker's contribution in particular from being seen to best advantage.

Bronwynne Cornish's bold and angular (if somewhat raw) formalized 'signs' were a surprising departure from her previous, often delicate work. Looking as if they had been brutally sliced out of clay, the prominent surfaces took on the appearance of pitted red brick, while the adjoining 'side' plains, smoothly painted black with yellow dots, seemed at odds with the earthy 'facing' surfaces.

John Parker's multi-piece set of five, Penetration, was best viewed as variations on a single theme. It presented a simple but sophisticated play on steeply-pointed cones 'penetrating' broad, flat rings, or on rings transversing their cones. The tensions set up between these two sets of basic shapes were enhanced in those pieces that were lightly marbled, in contrast to those of a dark terracotta colour.

Peter Hawkesby's Incinerators, with their imitation rusted and smoke-blackened drum-like forms, stood somewhat apart from the rest of the exhibits. The blandness of their setting seemed to deny some latent qualities which may have been more evident if they had been more sympathetically displayed.

Most of Warren Tippett's pieces used as a starting point his familiar hand-painted ceramic cubes: but these were surrounded and mounted by flat 'cut-out' figures deployed in a playful manner and with a touch of humour.

The five 'sculptures' by Denis O'Connor were the most varied in both form and quality. It was not his ideas that were at fault so much as a failure of the eye to realise the right way to relate one part to another. This was a factor that marred a piece like Stone Float. It was the restraint shown in The Magic Box, with its modest but apt decoration, that succeeded where his more ambitious projects just fell short of a satisfactory conclusion.

Sixteen watercolour drawings by Pauline Thompson represented the most substantial offering for public viewing from her hand for many years.

The paintings were divided into two groups: views of volcanoes and of vast plains. Each was distinguished by various features both natural and otherwise. A linking work, successfully combining both aspects, could be found in City, with Five Volcanic Cones. 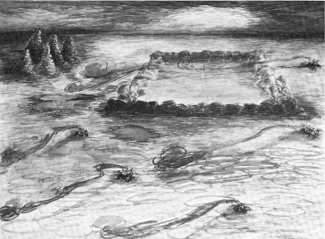 As a group the Volcanoes were less convincing than the Plains: but the close-up, Crater, Auckland, was an exception that combined a sense of solidity and atmosphere with an appropriate technique.

Although the various images connected with the Plains watercolours were quite recognizable, they were far from realistic landscapes. The combination of curious structures and natural features set in the sombre shale plain, added to the atmospheric blue-greys and browns of the sky with bursts of golden light, established a romantic setting latent with symbolic overtones. This was enhanced by a conservative style that was handled with considerable freedom of technique. There were occasions when the necessary discipline failed and images, such as the pools' in Shale Plain with Pools, began to lose their structure.

In the two Salt Block on the Plain works the potency of the idea was present but fell short of full pictorial realization. The most successful works were Shale Plain, Plain and the set Quartet (I-IV) where the various factors were convincingly combined.

Philippa Blair's exhibition comprised paintings of a transitional nature. Some of the most workable were those in which spot-splattered paint relied on light blue stripes or background colour to promote a subtle nuance so that each visual element enhanced the other.

There were also paintings that came close to a new approach. Although their general appearance was novel, the technique of applying dribbles of paint was not greatly different from her earlier work. What was new was the emphasis given to the dribble method. She has taken this technique, now grown familiar since it was established in the 'gesticulations' of Jackson Pollock, and in her best works has overcome the hackneyed consequences of its limitations to produce reasonably fresh visual effects. The distinctive property of this is a combination of colour and dribbled paint that results in a rich, textured surface. 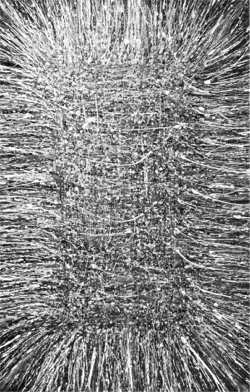 In paintings like Flying Carpet, Large Mat and Skin Mat, a simple oblong or grid sub-structure is introduced to act as an anchor for the multi-coloured drip technique and to mark the limit and direction of each sweep of a paint dribble. In this way, for each painting a subtle, harmonious rhythm is established and imparts a sense of structure and visual unity.

Claudia Eyley's domestic still lifes and semi-urbanized landscapes marked a new phase in her activities as a painter. The paintings displayed consistency of artistic achievement which added strength to the exhibition as a whole and effectively minimised its weaknesses. These were most noticeable in the portrayal of figures which were not always resolved as successfully as the landscape and still life elements. In Woman Approaching Mt Eden Landscape, the 'flat' shadow of the approaching woman hovered as an ambiguous silhouette which intruded awkwardly into the semi-three-dimensional space that accompanied the partly urban landscape images in the rest of the painting. 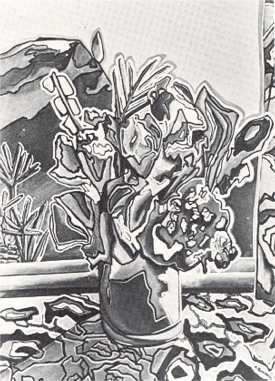 One characteristic feature shared by the paintings was the enclosure of each image within a fairly even black line. Although this separated individual images, it did so in a rather easy manner which combined with the artist's use of colour, resulted in paintings whose surface effects tended towards the decorative.

Many paintings concentrated either on a plant-dominated landscape or still life subjects: but among the most satisfying were some which combined the two aspects. This artistic unity was most clearly present in works like Kitchen Window and Still Life with Window. The latter displayed a suggestion of 'space' through a carefully controlled tonal distinction between foreground images and background landscape.

The drawings integrated figurative and landscape elements with greater skill, partly because of a simpler approach to the subjects than that found in the paintings. In the purely urban landscape drawings the manner in which the images were combined achieved even happier results.