The three constructed Drawings and the Canvas Reliefs which formed the bulk of Peebles' touring exhibition had a strong unity in which subtle variations were present. Although colour was added to the canvas, and charcoal to the paper, little had been done to disguise the nature of the materials used.

Rather like narrow pages of a book - bound separately and widely apart - the leaves in the canvas reliefs flop loosely, giving only partial support to the leaves on either side, while in the drawings the paper is stiff enough for the leaves to retain their position. Thus the drawings lack a flexibility that allows the canvas reliefs an element of chance: the way the leaves fall and rearrange themselves differently each time they are hung. In this way canvas and paper retain their essential identities despite the fact that the works in both media have similar structures: a simple repetitive pattern of verticals. The rigidity of this pattern is lessened, especially in the canvas reliefs, by the informality of the loosely hanging leaves and by the way they remain partly open and partly closed so that their outer edges curl and slowly undulate away from their strictly vertical bound edges. 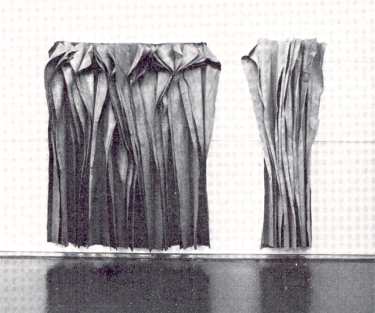 The leading-edges of the canvas leaves, with the slightly frayed character of cloth ripped along the weft, emphasised the soft quality of canvas as a material, as opposed to the more brittle edges found in the works constructed from paper.

Concomitant with such characteristics is the play of light and shadow - along the exterior edges and within the spaces between leaves in both the canvas and paper works.

Peebles' use of colour in the canvas reliefs is considerably subdued. Where more than one tint has been used, each section merges into the next, while the single colour itself modulates according to the density of its application. In some areas the paint is opaque brush-strokes, in others the unprimed canvas has the appearance of having been stained.

In these works, there is a rawness in the way the materials are used. There remains, however, an elusive lightness in the method of paint application and in the way the light that illuminates them is utilized, and a disorderly order - all of which add up to a strong visual statement whose message emanates from an appreciation of these visual effects.

This exhibition consisted of nine single titles: three works on paper, made up of three sheets each, one work comprising six sheets, and two large paintings on canvas. Covering several themes, McCahon has used elements established in previous series as well as introducing some new aspects, both pictorial and written.

The use of the Tau cross, an important symbol in the Necessary Protection paintings, reappeared with dark, Biblical foreboding in the three part A Song for Rua: Prophet, where the subtitle, 'Dreaming of Moses', gave certainty to interpreting the pillar of cloud as it travels forward across the stark landscape at the top of each panel. Also with Maori associations, the large canvas May His Light Shine makes use of the Tau cross as a source of light and life, but here the cross itself becomes 'a Kumara God'. 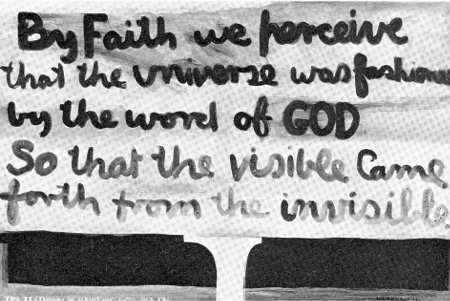 Other variations from the Necessary Protection series appear in the six-piece work, The Flight from Egypt. Here the new theme of the Holy Family's journey implies 'stages' in a similar way to the many variations McCahon has devised for the Stations of the Cross. When viewed as a single work the accumulated visual unity of this somewhat stark piece becomes apparent: a unity that is equally crucial to a full appreciation of Paul to Hebrews if the link between its visual and literary aspects is to be realized.

Hebrews is also the source for the Testimony of Scripture paintings, two of which suggest pictorial similarities to the 1959 Elias series, while the text carries implications allied to the Visible Mysteries set of 1968.

McCahon's familiar theme of guilt and innocence is given a new slant in Imprisonment and Reprieve, but the imagery introduced, while retaining McCahon's usual boldness, is less finely resolved than it could be.

Although the old painterly skills and draughtsmanship were still in evidence, in his recent works on paper - where a variety of media are coupled with photographs - Robert Ellis has broken new ground. 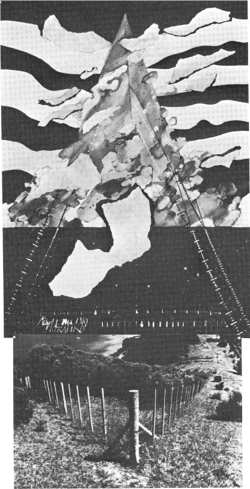 Photographs and paintings are well integrated, while yet retaining separate or separable elements. The photographs, which carry Maori associations, record buildings, monuments, graveyards, hillsides, or a combination of these, and frequently have survey projection markings incorporated into the print. It is the suggested projection of the survey markings from photograph to painting that supplies the unifying element for most of the twenty-four works. Some of these projections give rise to delicate drawings suggestive of landforms, man-made constructions or the implied results of map-making. In a couple the continuance of a hill sky-line from photograph to painting is used to good effect, so that the transition between the two techniques is smooth and natural.

This is the most rewarding series Robert Ellis has produced for some time.

Derived from shapes of sea-shore origin, Marte Szirmay's new cast-marble sculptures show few signs of the awkwardness of form present in her first series in this medium. Each piece evinces a completeness of form that, at the highest level; compares favourably with her best work from the early 1970s. The organic, sea-shore source is present by implication only, and although some works closely resemble shells, in most of these there are limits beyond which it is unwise to push such affinities. 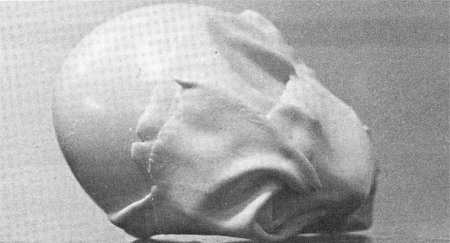 The larger Table-Top sculptures make full use of carefully modulated forms coupled with subtle contrasts of shape and direction. The outer limit of each piece is related to the circular perspex disc on which it rests, sometimes hugging, or extending upwards or outwards from - yet still in relation to - the edge of the disc.

The smaller Hand-Sculptures are rounder, more compact pieces. A few feature silver wire closely grafted to the over-all form of a piece. Another small group is partly wrapped in thin sheets of cast-marble, the wrinkles of which are in marked contrast to the smooth, well defined shape of the semi-enclosed form. From these smaller sculptures the best examples are found among the unadorned items.