The Obstacle Race by Germaine Greer
Published by Secker and Warburg, London, 1979

Germaine Greer's first book since The Female Eunuch is an attempt to confine between two covers a discussion of 'every single woman [painter] about whom anything could be found'. It is divided into two sections. The first of these, 'The Obstacles', enumerates, with pathetic examples, the reasons why women figure so little in the history of art. Here Greer is dealing with what she knows best: the sexual, political and economic factors which have, throughout history, made possible the oppression of women in all areas of experience.

Family (Chapter One) and love (Chapter Two) have prevented women from making worthwhile contributions to painting as well as other fields. The case of Marietta, daughter of Tintoretto, who was kept firmly under her father's thumb, is typical. She was reputedly highly talented, although no known work survives, and her story possesses a painful irony: her talent was employed mainly in the Tintoretto bottega for the fifteen years immediately preceding her early death.

Artistic girls who reached maturity were often thwarted by the second man in their lives. Frida Kahlo's life, like her work, was seriously debilitated by her relationship with Diego .Rivera. There seems Iittle reason to doubt Greer's (typically neo-Freudian) theory that, since women are trained to see the fulfilment of most ideals in men, the urge to create art leads them often to the artist, in whom creativity is personified. And there, as often as not, development ends.

So far, the story of women in art parallels that in other areas, but female painters also faced obstacles more peculiar to their calling. Not the least of these was the double standard, manifested most often in the sort of fulsome praise in which the phrase 'could have been painted by a man' was usually embedded. Praise of the painter was too frequently substituted for criticism of the painting and patronising condescension proved to be yet another obstacle in the race.

Then there was humiliation. A woman artist could hardly help offending traditional standards of feminine modesty since her sex made the effort to follow an individual artistic path more noticeable than it was in the case of a man. Often it was suggested that women's paintings were, in fact, produced by men. So vilification of the artist was substituted for appraisal of her work.

The worst charge that could be levelled against a woman was that of promiscuity - a tendency overlooked or indulged in male artists throughout the centuries. Gossip of this sort did serious harm to the careers of Artemisia Gentileschi, Elizabeth Vigee-Lebrun and Angelica Kauffmann.

The last named also, somewhat contradictorily, represents one of the two polar sexual stereotypes to which women artists were frequently confined. Many writers commented on Kauffmann's 'mannishness'. Women who achieved anything in art either had to be de-sexed or were forced into public personae of delicacy and sweetness - and relegated to very secondary rank.

'The Disappearing Oeuvre' is the saddest chapter in The Obstacle Race, describing the loss of the work of women artists. The physical neglect of paintings by women is nothing better than an act of cultural vandalism which feminist metaphoricians may legitimately see as a form of rape. Again and again, Greer mentions a name of which no more can be said than, 'Other attributions will remain dubious until more of her. . . work is known'. In most cases the oeuvre has been permitted to disappear because it was minor. Even so, an important part of women's heritage has been lost, to the detriment of everyone. 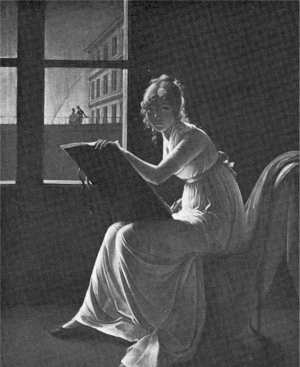 A more distressing element in this topos is the reversal of critical opinion which may occur when a once esteemed painting is reattributed to the brush of a woman. The critical respect in which David's Mademoiselle Charlotte du Val d'Ognes was held, plummeted when it was discovered that Constance Charpentier had painted it. That its market value also shrank goes without saying.

Many reviewers of this book have seemed afraid that Greer is keen, for feminist purposes, to bestow the mantle of greatness on many who do not merit it. The above examples should make it clear that she is, on the contrary, concerned to show why there are so few great women painters, and why so many who showed talent did not have it taken seriously. In this she has succeeded admirably.

A more legitimate criticism that might be levelled at the book is that too often we are confronted with nothing more than a roll-call of women about whom we know nothing but their names and that they painted. If these lists are tedious for the general reader, for serious scholars in this rapidly expanding field the very full annotations which rare provided for each name should open up fruitful avenues for exploration. This can be the only explanation of Greer's aim in mentioning any woman artist to whom she discovered a reference.

But since this was so, where, one must ask, is Frances Hodgkins? None but living painters were excluded from the scope of the book and Hodgkins's British reputation is still alive. The only possible explanation for the omission, and it is not a convincing one, is that Greer considered Hodgkins sufficiently well served not to require inclusion. This is a pity, since Hodgkins's career, and especially her struggles against sexist prejudices in considerations of her work, exemplify many of the motifs common in the stories of other women artists.

Finally, a note on the illustrations is called for. Although their number and variety is greater than that in other books on this subject, the standard of reproduction is not high. This can only weaken the claims Greer makes for their value - a weakness not totally offset by the high quality of her prose.