For just over a year now the Auckland City Art Gallery has been like an orchestra without a conductor. The lack of authoritative artistic direction is, according to everyone with whom one discusses the Gallery, the crux of its problems - and there seem to be enough of them. 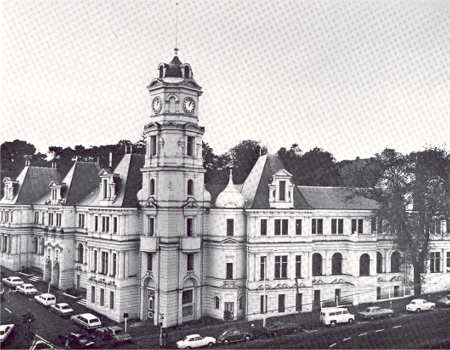 Staff relations, for instance, dropped to an all-time low about a year ago when the staff threatened strike action on the eve of an exhibition. Such an unheard of event was perhaps the decisive spur in prompting the Council to start unravelling the administrative mess and soothing the hurt of staff worries. The Gallery was set on a new path to stability - if not international renown - with the appointment of Grant Kirby as administrator. Kirby, by profession a surveyor, was co-opted to the Gallery from the Management Services Division of the City Council. He has proved eminently successful in improving staff stability, giving coherence to planning and rationalising the logistics of administrative problems.

Nevertheless, the Gallery has suffered the absence of artistic direction, of a person at the top able to give the creative drive, guidance and inspiration which only a person with professional knowledge and personal vision in the field of art can.

Arguing the point, Kirby states that one of the major problems with choosing a single director is that artistic and administrative skills rarely combine in one person. He defines an arts administrator, as a 'superman'. Others, including many in the art world, find this view somewhat condescending. Moreover, it threatens, the traditional authority of the gallery director: specifically, the chances of promotion for aspiring gallery staff. There is also a lurking fear that dual directorship could impose an economic straitjacket on artistic choices. 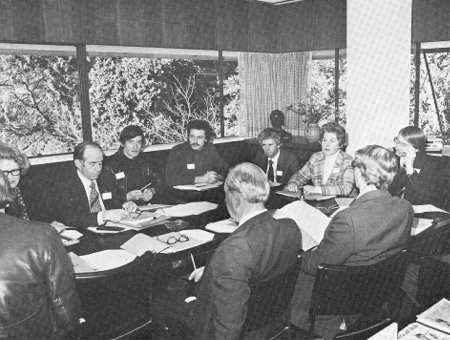 Meeting of the
Auckland City Art
Gallery Board of Management

Cath Tizard, who chairs the Gallery's Board of Management, sees the appointment of an arts administrator as the ideal, although she too has misgivings about how many people would suit the position. At second best she agrees with Kirby's idea of dual directorship, though she places the artistic director firmly above the administrative. This is essential, 'if the place is not to become simply a museum'. She adds: 'One of the past mistakes the Council made when hiring former directors was that they were over-impressed with qualifications on paper at the expense of noting someone who had an understanding of the local context. We need a director who is passionately involved in New Zealand art.'

The idea of dual directorship is dismissed as 'buried' by art history lecturer and Board member, Michael Dunn. He compares the role of a gallery director to that of academic professors who make decisions about administration and finance as well as directing their departments from a position of strength derived from expert knowledge of their subject.

Dunn argues that it is possible to find both artistic and administrative abilities in one "person - in fact, he says that the idea of art administration as a career is gaining increasing popularity. The main problem as Dunn sees it is not so much that of defining directorship: it is rather that the finance and publicity of galleries today are of such proportions that they require greater professional expertise.

Hamish Keith, an arts administrator himself, agrees. He points out that the practical running of a gallery is inseparable from the achievement of its artistic objectives; and that the drawing up of a distinction between the two creates a false dichotomy. As if to quash any misgivings on that score he points to Luit Beiringa who heads the National Gallery and Michael Volkerling of the Arts Council, as two successful arts administrators working in New Zealand.

Perhaps more important, however, than the opinions of the decision-makers, are the feelings of the staff, who benefit most directly from positive direction and are the first to suffer its absence. Senior curator Andrew Bogle sees the possibility of getting an arts administrator as slim, especially because of New Zealand's geographical isolation and comparatively low salary rates. If the artistic and administrative responsibilities had to be split, the artistic director would have to be paramount, Bogle insists. Such an artistic authority would have to communicate to the staff 'sensibility, foresight and broad taste', while maintaining credibility with artists, dealers, councillors, art historians and the general public. For the curators, an art director is there to help settle controversial decisions about purchases, collections and exhibitions as well as to decide where the Gallery should place its emphasis in regard to foreign, indigenous, contemporary, historical and innovative works. Bogle: 'A director is somebody who can settle problems through his or her artistic authority; for without that authority the person will behave in a politically expedient manner. One cannot rely on an administrator to make these sorts of decisions because they depend on a knowledge and feeling for art. It's not a mechanic's job.' 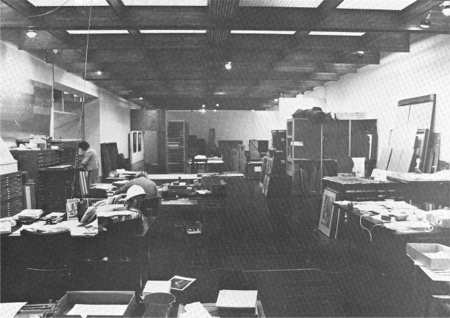 The Centre Gallery converted
to temporary storage and
office space

Curator Alexa Johnston, who is at present handling the job of Education Officer as well as her curatorial responsibilities, suggests that the head of an art gallery must also act as an 'ambassador' on a local and international level. 'Auckland already has the quality to be an international gallery in the sense of having a collection of world standard, such as its prints and drawings collection, but this is hardly known. At the same time we have to be in touch with new trends here and overseas.' She adds, after reflecting a moment: 'The lifeblood of a Gallery is the staff and the quality of the staff reflects the direction. A director must be able to attract the best people. People are not going to work in a gallery if it is a Mickey Mouse outfit!'

It does not take much to sense that the staff are tense and anxious, having to establish their own guidelines and maintain several responsibilities at once. It is they who, unfairly, must also bear much of the criticism which is tossed around, too frequently and too vehemently for it to be simply ignored.

One of the major criticisms - that the Gallery does not provide enough excitement or inspiration - is probably a reflection, Michael Dunn points out, of a general dissatisfaction expressed in the good-ol'-days formula: 'things were better five years ago'. The Auckland City Art Gallery, he says, is one of a number of institutions suffering the effects of national economic malaise. Both he and Grant Kirby argue that much of the criticism thrown at the Gallery is the result of ignorance. Most people do not realise, for instance, that over ninety per cent of the Gallery's collection is in storage because of a lack of space - a problem that will be rectified by the completion of the old library building renovations planned for July 1981.

The measuring of whether a gallery is dull or not also depends upon whose criteria the judgment is made. Some might say that the Gallery is 'boring' because it does not adequately represent trends in contemporary New Zealand art. Kirby counters this with the assertion that such criticism is usually the result of some artists' 'sour grapes' and can be dismissed as 'personal, emotive and illogical'.

Dunn also questions to what extent a gallery should, or can, set new concepts or trends in art, and whether it is controversy which ultimately provides interest. 'Controversy does not apply to the National Gallery in London, but that doesn't mean it's an uninteresting place,' he argues. Moreover, the kind of person who is in constant search of new thrills will never be satisfied for long with one exhibition or another. 'Titillation is only a small part of a gallery's activities.' Criticisms, Dunn concludes, need to be balanced against the responsibilities the Gallery has to the public, including ratepayers and the City Council.

It is, however, precisely this responsibility to the community as a whole which Hamish Keith feels the Gallery does not fulfil. 'It is neither a force in the contemporary movement, nor a touchstone to tradition. It was once a force for people, affecting their ideas and standards about art and inspiring discussion. Now it doesn't figure in the mainstream. The Gallery should represent the highest standards in visual experience for the community. To achieve this there needs to be a clear view of objectives and a personality to switch it on.'

One step towards this aim has been the creation of the Art Gallery Board of Management, chaired by Cath Tizard. It comprises three councillors, the town clerk, a representative each from the Mackelvie and Edmiston Trusts, a representative from the Art Gallery Associates and three co-opted members of the community. There are three art professionals on the Board: namely, John Maynard, Hamish Keith and Michael Dunn. The Board exists mainly to establish loose parameters within which the Gallery staff can act freely. It is not there to dictate or control: for instance, all appointments below the Director would be decided by him or her. The Board also provides a means by which the skills of people from both the artistic and general communities can be used, as well as attempting to broaden the base of financial responsibility for the Gallery, the idea being eventually to gain contributions from Auckland's Borough Councils.

The influence of the Board and the appointment of Kirby have helped the Gallery put its housekeeping in order. Staff turnover has dropped, the condition and storage of paintings improved, and exhibitions are planned well ahead - in fact until 1984. 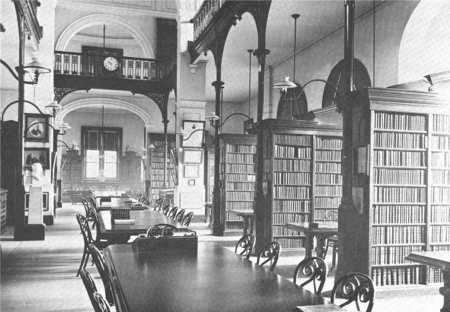 1984 is not a particularly cheering date to aim for: but it seems, according to the plans that the Gallery will have moved into top gear by then. The emphasis in the early 'eighties will be on making the most of the renovated old library building, where the new space will allow for a theatrette for live performances, concerts, video art, films, lectures and meetings for associated groups; an office and club-room for Art Gallery Associates; an education room for an education officer with facilities for lectures and classes; two galleries for the print collection; four galleries for choice works from the collections at present in storage; two galleries for changing exhibitions; and a major ,gallery with a mezzanine floor to display the Gallery's finest paintings and sculpture. Three of the present large galleries will be used for touring exhibitions. There will also be air-conditioned storage areas, curatorial offices, security arrangements, recreation and observation areas displaying magazines and catalogues, and over-all more space and entrances for public use.

Despite an extremely tight budget, exhibitions planned for the next year include Len Lye, twelve Toulouse-Lautrec lithographs, the Von Thyssen-Bornemiza collection covering masters of the last hundred years and an exhibition of Russian and Greek Orthodox ikons from the twelfth century. The aim in presenting this range is to provide two 'scholarly' and two 'popular' exhibitions. The latter, apart from their intrinsic delight, will serve the good public relations function of drawing a larger number of people into the Gallery to look at the works (rather than just visit the coffee shop, bookshop or lavatories). Exhibitions planned even further ahead are well worth the patience: 1982's Dutch Still Life Exhibition; 1983's Monet exhibition; and 1984's Contemporary American Art Exhibition, should provide Aucklanders with much pleasure and wonder.

So there's little cause for despair and hopefully there will be reason for acclaim. Meanwhile, the Gallery is fulfilling its three major functions - to acquire, conserve and display. With time it should also excite and inspire.