George Baloghy's new work showed him consolidating both his technique and the manner in which he manipulates images. As was evident in Mt Eden Residence, paint is now sometimes applied in a way that allows the texture to suggest detail; but, as with his earlier paintings, the controlled, yet nervous, black line, still defines the images. In essence Baloghy's paintings retain a graphic character, so that colour and texture become additives rather than intrinsic elements within the initial conception. But if the idea requires that the graphic aspect be loosened then this can be done without undue loss, as demonstrated in Meat and Three Vegs with its imitation Ian Scott Lattice. 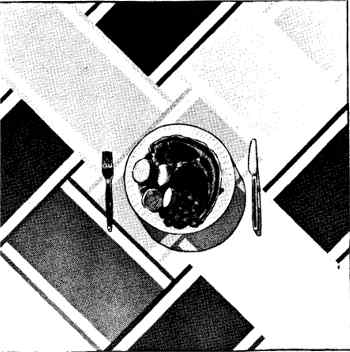 The formal means used by Baloghy to depict his images may be simple enough, but frequently they carry complicated artistic or cultural references that belie this simplicity. Such references act like a sliding scale in accordance with the viewer's knowledge of the source material. Some are of immediate current usage (as in Meat and Three Vegs); others less so, as in the Colin McCahon references in Room, with its North Otago hills, or in Three Days in Canterbury and Nelson, where the implications partly relied on the painting's familiar title; while others made use of less familiar source material, as in Colony with its version of 'Kidikidi', Bay of Islands, as depicted through French eyes in 1824.

Baloghy's habit is to take objects from normally unrelated physical or cultural environments, or periods in time, and within a single picture, juxtapose these objects in order to emphasize some angle suggested by such an association. Cultural disruptions of this sort could be found in Ancient Things where a Doric column was aligned to carved Maori poles, or in the electrification of the 1824 landscape found in Colony. In a different context, such a correlation was even more pointed in such paintings as Te Kooti as Abstract Expressionist. A further shift of values came into play in paintings like the one showing a parking metre set in the beach on the very edge of the incoming tide - a modern derivative from the King Canute story.

Although such devices are indirectly derived from the Surrealists, they were handled without the overtones found in a small group of paintings which made use of the Magritte device where the pictorial and conceptual 'reality' is disrupted by introducing a 'hole' in the picture, often with the 'cut-out' images mirrored elsewhere in the work. The most successful of these paintings was Official Hedge.

Other works commented directly on the function of art, some in the context of art in a gallery environment, as in Installation View - or in an esoteric manner, as demonstrated by the conceptual statements in Short Circuit, where 'art' turns in upon itself.

If some of George Baloghy's paintings occasionally laboured the visual point behind an idea, in others he was able to convey ideas that were both conceptually and visually stimulating. He is usually a gentle satirist: but there are times when he delves to deeper levels, as in Sculptural Proposition: 'Carpark', which invite interpretation on several layers.

At an initial glance, Macdonald's use of colour might not have seemed exceptional, until the monochromatic reproduction on the poster was compared with its colour print: a comparison which demonstrated that colour is intrinsic to his vision as a photographer. Other aspects were more readily appreciated. His emphasis on clear-cut imagery invites a good deal of detail: but always this was kept subordinate to the photograph as a total image. It appeared as if he wanted nothing to impede the visual facts as stated on the film. In this respect he is a realist for whom the natural environment has replaced the human one of the Social Realists: but while Nature might be the subject, by implication, the human element was never far away. If this aspect was brutally stated in the stranded whales on Muriwai Beach (see Art New Zealand 7), in the forest images gentler but equally sinister overtones were present. 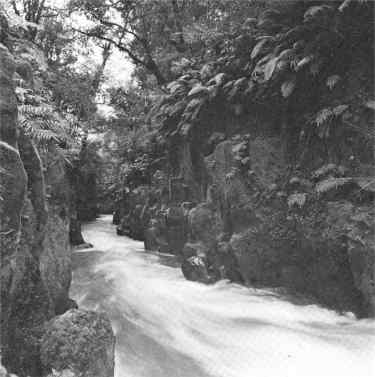 One element to which Macdonald showed great sensitivity and succeeded in capturing was the physical sense of the forest's presence - whether this be the soft penetration of filtered daylight, the variety of naturally-textured surfaces or the enclosed dankness that was so well pictured in Stream, Whirinaki State Forest.

If many of the prints captured a feeling of tranquillity, or of natural orderliness that went beyond the consideration of careful pictorial composition to suggest something of the solemnity of the forest, there was also the implied human threat to the existence of such a natural environment.

In contrast to Ian Macdonald's concentration on ecological ideas, with Real Pictures' second exhibition the motifs expressed in Janet Bayly's polaroid prints were more introspective, and cast with conceptual overtones.

Having adjusted to the new demands of the polaroid technique, Bayly's prints made good use of the somewhat vague imagery and the dense, bluish colour that characterizes the medium. Her images covered a small range of subjects with varying success. The series, Female Nude, was inconclusively resolved: but among her flower prints Poppies in Glass Vase and the almost psychedelic Statice Alight achieved differing though sensitive visual results.

The most interesting and best controlled prints were two series called Lace Dress which simply showed a dress hung against corrugated iron, the position of the dress being slightly modified by a breeze. As images they were sparse but adequate in their visual refinement; and as a series took on something of a controlled time sequence that gave each set a sense of compact integration.

The continued extension of John Parker's constrained ceramics is impressive. Although there was nothing among his recent work quite as provocative in its implications as his five piece Bryan Ferry series displayed during November 1977, nevertheless the dichotomy between 'sculptural' and 'practical' intentions has now become less pronounced. This division of his dual activity as an impeccable craftsman is losing its edges, with the relative definitions merging into a more unified concept. John Parker is among those rare potters who think as artists. 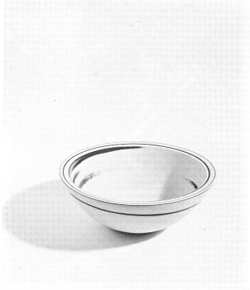 The single link with works like the Bryan Ferry set was Trumpet and Base (reproduced in Art New Zealand 14) with its two components in sympathetic countermovement. Such deceptive simplicity of shape and design could be seen to undergo further simplification in the porcelain Cones with their chaste agate decorative swirls. Essentially objects to look upon, stripped of any obviously practical use, their crafting however reflects their natural extension from Parker's more functional pottery. It is in the nature of Parker's work that this argument can be reversed and applied to the bowls (the most immediately useable items in the display). What is involved is a unified concept, backed by the necessary technical skill and finesse, juggling seemingly complementary elements such as lightness and weight, slenderness and bulk - but with an elegance which prevents the playing of one element off against another from becoming too crudely obvious. It is the difficult task of applying art to hide art.

Parker's use of contrasting forces was most easily demonstrated in his Bottles, with their fully rounded bodies, their diminutive necks which then tapered slightly outward to the lips, the thickness of which ran counter to the function of easy pouring. Again the dichotomy of appearance versus function asserted itself.

A similar, even better, example of this sense of compactness coupled with a feeling of lightness was found in the 'dark stoneware conical bowls (as used to contain Terry Stringer's bronze pears), as well as being an integral part of the Trumpets with their open-mouthed lips curving thinly outwards from the firm stability (often coupled with squat compactness) of the supporting cylinder.

Part of the bottles' success lay in the smooth transition from full body to slender neck. This transition from one shape to another is an important characteristic of Parker's ceramics - whether the junction glides between shapes or is achieved through carefully-calculated contrast (as in Trumpet and Base). A similar principle applies to the termination of various forms. This was a feature of the wide bronzed bowls in which the size and open fullness of the bowl seemed almost defied by the footless nature of the base upon which it balanced. This interplay was further enhanced by the thickness of the walls when coupled to the dimensions of the bowl and its implied weight.

If the size and thinness of the large bowls could be admired, so too could the thick walls of four small, semi-spherical porcelain bowls be appreciated. In spite of their relative weight and thickness, such words seemed inappropriate for bowls whose main visual impression was one of lightness: an impression Increased in those bowls where the marbling was sparingly used around the lip (see illustration).

John Parker's preference for basic forms and his restrained treatment of these, (plus the difficulties such limitations can impose) could be found in the Cylinders. These were more or less divided into two sets: the large bronzed ones in which the glazes sometimes took on subtle modulations, and the smaller porcelain ones with their appropriately trailed agate patterns. Although following the same basic form, an entirely different set of feelings became associated with these two groups of cylinders. Besides the differences of size, glazeing, texture and minimal decoration, other differences were also apparent - such as the treatment of the rim: the porcelain ones being cut flush, the bronzed ones having rims tending to be slightly irregular. Such technical audacity in bringing off pieces like this requires impeccable judgement. In almost every piece this was revealed. In the large bronzed cylinder, however, the use of an incised line circumscribing the lower portion of the shaft raised a query: did it really add something essential, or had Parker become concerned over the size of the cylinder?

Concurrently with Parker's ceramics, Rodney Fumpston showed a small exhibition of five recent colour etchings along with five collages, all of which contained reference to sea-shells in one form or another.

If the Shell etchings attested to Fumpston's skill as a technician and brought forward some interesting visual results, as a series they lacked the punch and subtlety of his best prints (as in, for example, Sky - Marble Arch). Although they displayed a variety of shape and colour, they somehow failed to jell as a series. In the passage from the shell initiating the idea and the final pictorial abstraction an inconclusive factor intervened: with the result that a print like Blue Shell, while it possesses an interesting shape, is ambiguous as to its imagery. Conversely, Yellow Shell is rather too literal for the general pictorial treatment required. In this respect Brown Shell succeeded: but here the technique reverted to one parallelling that used by Picasso in his animal plates (though no influence is here implied). The most successful of the Shell series was Pink Shell.

While conventionally formal in design it contained some of the calligraphic quality found in Fumpston's best prints.

More expansive, the collages were possessed of greater persuasion in their pictorial statements. With delicate colouring, each of the Shell Collages made reference to shells either in their original natural state, as painted or as photo-mechanically printed images, or as buttons, or a cameo. The three best collages were light and witty: but had an artistic weight that was ethereal while being quietly substantial.

A suggestion of 'trompe l'oeil' permeated Shell Collage 1: but the illusionary realism was reality itself, modified and controlled to a specific, if deceptive, artistic end. Number 3, with a delightful lightness of touch, had as its background a sketched-in Rangitoto, a backdrop for fragments of broken glass and crockery which assumed the shapes of yachts on the harbour.

It is this imaginative use of trivial material, treated in his own personal manner, that makes Fumpston a highly refined visualist where delicacy of gesture dictates the substance of fragile feelings.