I was asked to write an article on 'the problems (if any) encountered in the mounting of a new play'. I can honestly say that 'the problems (if any)' are best described as the most interesting, exciting, informative part of playwriting that this writer experiences. The actual writing of a script is the hardest and most problematic aspect - particularly getting words down on page after page after page. I think it was Racine who, when asked 'How is your new play coming along?', replied: 'It's finished.. All I have to do is write the dialogue'.

I have a notebook full of ideas for plots and characters. Hacking them into shape is physically and mentally exhausting. Even worse is my mental state after I have hacked a script into shape and sent it off to a theatre for comment (with every playwright's silent prayer that it will be accepted, produced and acclaimed by the critics and the paying public as perfect, without a word having to be changed). My wife and I refer to this state, where I am waiting for a nay or an aye - in fact wondering why I had the nerve to send the feeble thing off in the first place - as my 'post-natal depression period'. After all, it is my baby. I can't help worrying about its survival and whether it will require surgery to remove or add parts to its shape, before it is assured of a healthy future.

All this is like a long-forgotten bad dream, though, once my script is in rehearsal, with actors, director and myself on hand finding out if, when, where, how and why it does or does not work to their satisfaction or mine.

A playwright who doesn't enjoy this period, with actors and director weighing in with contributions that the writer respects as much as his own, surely misses something essential in theatre. Opening night is a team effort and should look like one. A writer refusing to alter a line that an actor insists isn't right, is as sad as an actor incapable of saying a line that the writer knows would work if said right. Striking a balance between what an actor can do and what a writer wants done, is the crux of the relationship between playwright and cast. When it works and an audience enjoys the result, is when live theatre beats the movies and TV hands down. 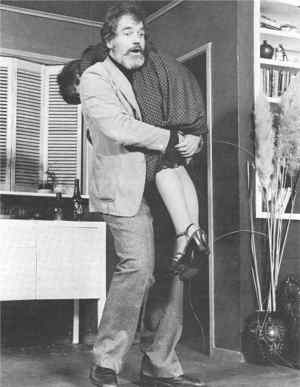 I have always made a point of sitting in on rehearsals when someone else is directing a new play of mine. I have also made a point of attending as many performances as possible and gauging audience reaction. I don't mind cuts and additions made during the season, providing of course that I am dealing with actors good enough to shape a finished script.

Hunting was a delight to work on, because in Michael Haigh, Alice Fraser, Arthur Ranford and Adele Chapman I knew I had four thoroughly professional artists dedicated to their craft. Of the dozens of suggestions for alterations; additions and cuts they made during rehearsals, I can only think of two I rejected after discussion. I have too high an opinion of actors to dismiss their comments on my 'holy writ'. A play is words on paper before it is brought to life on-stage before a paying audience. It's the actors who bring it alive and if they find there are moments they can't believe in, or moments that embarrass them (and you know and respect their talents) then the playwright who ignores their opinions is the loser in the end.

As I am at present writing full-time, during my tenure as Victoria University's recipient of this year's Writer's Fellowship, I had no problems going over the script each day after the previous evening's rehearsal and making the required alterations, with the actors' comments fresh in my mind.

I even found myself adding a scene to the play after opening night, when Adele Chapman and I discussed her character until 1 am and decided it needed something extra to round it off. The following day I wrote a short extra scene, we rehearsed it the next afternoon, and that night it was in the play.

My 'baby' looked just that little bit healthier after this minor piece of cosmetic surgery.

It must be said though that at this juncture of our country's theatrical history, Wellington does seem to offer the New Zealand playwright the most encouragement. Actors and directors in the Capital have no qualms about giving their best for a local script. I am not saying that other centres don't give their best. I am saying that so many New Zealand scripts have been premiered in Wellington over the past ten years (with a handful going on to do well at the box-office throughout the country and overseas) that there is now a nice keen edge to Wellington productions of New Zealand plays. It's as if those involved are aware that the New Zealand script they are involved in creating could turn out to be another hit, rather than just another play. If that sounds commercial, so be it. The greatest playwright of them all ended his days a successful businessman, and I see nothing wrong in us emulating the greatest.

I know that during rehearsals of Hunting and my other plays, I was fully conscious of a paying public taking their seats and expecting the stage to give them their money's worth. It's also my attitude when I buy a theatre ticket.

When directing Hunting I knew that the final scene had to give the public not only their money's worth, but also jolt them out of the seats they'd paid for and leave them with plenty to think about.

I am not going to give the game away by describing this final scene: but I can say that writing and directing it with a view to arriving at it logically, yet still making it 'a kick in the guts', as one critic described it, was a fascinating experience.

I have always liked power in drama. By this I do not mean gratuitous violence or sex. I mean having a believable character explode in a fit of passion, which is at once shocking and credible, so that those watching, having been absorbed into the events on-stage, are suddenly slammed back in their seats at a shattering turn of events they hopefully recognize in the end as inevitable.

Sitting in during the first week of performances (with pen poised over a copy of the script) allowed me to study the audience's reaction to the climax of Hunting.

I must confess that the opening night reaction was stomach-turning. The theatre was to all intents and purposes struck dumb. The audience was absolutely silent as the lights faded, and stayed silent for what seemed like an eternity. Were they shocked? Embarrassed? Moved? Insulted? Thinking? Disgusted? Was I going to have to come up with an entirely new ending to my play?

I can only say with some pride (dammit, I worked hard for this effect!) that this has been the same reaction every night, followed, thank goodness, by tentative applause which soon rises to something I flatter myself by describing as enthusiastic. It's difficult to decide which reaction gives me more satisfaction: the stunned pause or the final applause.

Come to think of it why should I decide? I'll take both reactions to bed with me and lull myself to sleep thinking of how the audience reaction this playwright wanted turned out to be exactly what he got.

With that in mind, 'the problems (if any) encountered during the mounting of a new play' simply don't exist anymore.