Two important exhibitions, Drawing '79 and New Canterbury Contemporaries, were held in Christchurch during September. Exhibits in the first show, at the CSA Gallery, ranged from Colin McCahon's very informal Message to Olivia consisting of repeated, pencil-drawn 'doodles' of cats covering a sheet of note-paper, to three more formal geometric studies of sculptural reliefs by Martin Mendelsberg. These created the illusion of three dimensions by making a circular shape appear to float about 2 cm. in front of a chequered background.

Philip Trusttum showed a series of huge ink-drawings of heads which were over five times life-size and related to his exhibition of paintings held at the same time at the Brooke/Gifford Gallery. Pat Hanly sent two large drawings which were very disappointing at close range, but came alive when viewed from a distance. 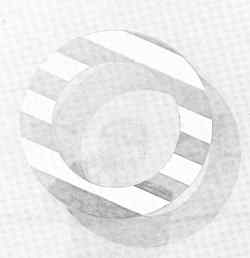 The most significant aspect of the show, however, was the strong and varied contribution made by the younger artists. Impressive for their uncompromising singleness of purpose were four almost identical works by Ian Laughlin, a recent Honours Graduate from Ilam School of Fine Arts. Consisting of gestural strokes of off-white oil paint applied to white paper, the lack of colour or tone made one notice the marks as important compositional elements.

While these four pieces were perhaps not entirely satisfying in themselves, they were undoubtedly the most challenging in the exhibition. Janet Bathgate's pencil Embossments, in which impressions made with an etching press had been shaded over with pencil, combined the printmaking and drawing processes in an innovative way. Her three aesthetically competent works were hung near form-evoking sculptural drawings by Pauline Rhodes. Full of space, texture and 'situation', these were reminiscent of her environmental pieces concerned with volcanic scoria, rocks and the Banks Peninsula.

Several of the twenty-seven artists in the Drawing '79 show were also represented in the New Canterbury Contemporaries, exhibition which was running concurrently at the McDougall Art Gallery. Bruce Robinson and Graham Snowden 'linked' the two shows by displaying preliminary drawings at the CSA for their completed pieces which were displayed at the McDougall.

The New Canterbury Contemporaries comprised fifteen photographers, print makers, painters and sculptors, all graduates of the Canterbury School of Fine Arts. In order to convey an idea of the range of current ideas, a small amount of work was submitted by each artist - only two works in some cases. This resulted in a disappointingly sparse show, which yet offered several interesting glimpses of new talent.

Technical excellence was demonstrated by the photographers and printmakers and nowhere was this more obvious than in the unobtrusive yet powerful photographic studies of rivers, roots and rocks by Murray Hedwig. Uncluttered by any obvious attempts at aesthetic effects for their own sake, Hedwig's photographs are straight shots in colour of natural phenomena. There is nothing startling in his choice of subject, but the detail and precision of his prints makes the viewer re-focus on familiar objects and see them anew. 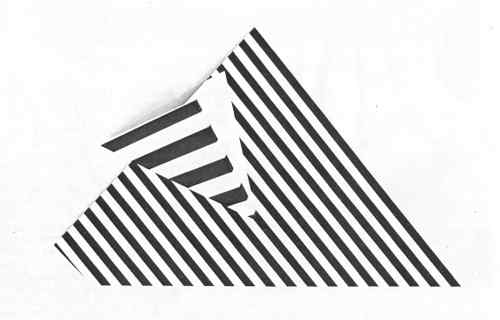 More provocative and socially orientated, Paul Johns's three almost identical film-sequence photographs of two figures in a sexual pose, cleverly combine photographic imagery, a label and the picture-glass. The label saying 'Censored' covers the crucial part and is placed - half peeling off - under the picture glass. Thus the viewer's curiosity is aroused, but the censorship label cannot be removed. Paradoxically it masks the 'indecent' part of the photo, and by so doing it titillates human curiosity more than if all the facts had been revealed. Thus Johns uses all the elements at his disposal - photographic image, written label, picture glass and human reaction - to make a strong statement about censorship. These works were removed from public exhibition following a complaint a few days after the show opened.

Graham Snowden's paintings consist of the names of products isolated from any background and painted as if seen at an angle. Each painting is a word against a white background measuring about 1/2m. The idea is very design-orientated, and the words do not quite hold up as statements in their own right: they lack scale and would have been better ten times the size.

In Bruce Robinson's four black-and-white striped angular reliefs, planar shapes project at different angles from the wall, creating three-dimensional paintings of some elegance. Apart from their attractiveness as objects, however, the justification for the works and the point of the elements within each work (the stripes for instance) is not apparent. The works do not seem to do anything.

This cannot be said about the work of John Hurrell, who is the most complex and subtle of the painters, and was represented by only two works. A recent exhibitor before the public, Hurrell in fact left Art School some five years ago and has since been working out his ideas. These stem from the work of Bridget Riley but involve the use of a grid system derived from quilt patterns. The results are hard-edged, striped paintings in which strips of pale hue progressively diminish in a logical sequence against a near-white ground. Subtle colour changes occur both to figure and ground as one looks down or across the surface. The works are effective: but too many things are happening simultaneously. Hurrell has not yet overcome technical problems. His task is not easy or his concern popular, and the 'toughness' of his single-minded purpose stands out powerfully against the 'sweeter' painters in the show. 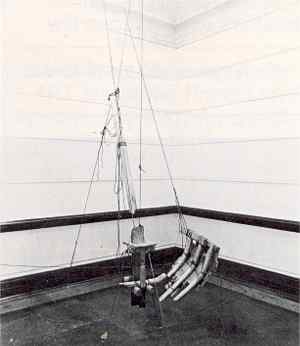 Neil Dawson exhibited small wooden house constructions in distorted perspective which were part of his Order/Chaos series; and Bing Dawe showed a three-part sculpture on the theme of boats. Using tarred rope, around mast-like timber, this was suspended from the ceiling to hang like an outsized lobster-pot. The large construction smelt of pitch and evoked thoughts of fishing nets and yarns. It was the only piece in the. show to evoke an emotional rather than intellectual response, and contained a quality which all the other 'analytical' works lacked - a warm 'human' feeling.