It seems to me that there should only be allusions. The contemplation of objects, the volatile image of dreams they evoke, these make the song.
MALLARMÉ

Recent Sculpture and Drawings by Christine Hellyar was the first exhibition by this artist since her return to New Zealand from a year and a half of study and travel spent primarily in Scotland. Physically the exhibition consisted of seventy small sculptures arranged in groups of ten; four small boxes of wash drawings; a large sketchbook-cum-diary consisting of the artist's thoughts upon sculptural matters such as materials and construction principles, and an assortment of bird feathers and pressed flowers acquired on her travels. 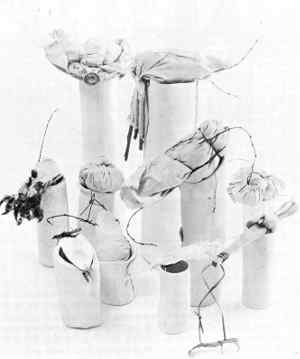 Hellyar is best known for her pioneering achievements in the use of rubber latex and metal casts of both man-made and natural objects, in order to convey, in sculptural terms, natural processes such as growth and decay. In the past, these sculptures were usually representational, using objects such as clothes, seaweed, tree, branch-and-leaf sections. It was her constant manipulation and juxtaposition of the vulnerability and fragility of the objects in relation to the uncompromising permanence of the material (latex) which enabled Hellyar to explore a wide range of ambiguities and humour, running anywhere from the banal, to the macabre, to the surreal. The artist's own preoccupation with 'the life for the object itself' coupled with a vivid imagination and expert craftsmanship gave rise to sculptures which took the, ordinary items into a realm where they became aesthetic objects of contemplation.

In Recent Sculpture and Drawings, the preoccupation with depicting natural processes was still apparent: but Hellyar was now concentrating upon the more symbolic aspects, eliminating all references to representationally-modelled subject-matter in favour of the possibilities inherent in constructing assemblages composed of found, natural objects themselves. The objects, through their assembled collective state, abstractly represented the 'feelings' of activity as opposed to passivity, seclusion as opposed to exposure, darkness as opposed to light, various oppositions of textures, and the effects of shadow upon sculptures created within a limited colour range. The sculptures were created from materials such as cloth, sea-shells, driftwood, and feathers - all delicately stitched and woven together, while the employment of plaster and white ceramics acting as bases, platters, or pedestals further intensified the unification of the objects as a single visual unit.

The use of such cryptic titles as Flight Feelies, Treasured Mummies, Hybernating Emptying Vessels, and Low Creatures Raising Their Ugly Heads, presented the viewer with the opportunity of indulging in literal interpretations of the sculptures as representatives of some imaginary species from another, unknown world. Indeed, the sculptures became 'items of imaginary ecology' (Gordon H. Brown, Auckland Star), visionary artefacts and ethnological specimens from a fantasy world in which all things are distributed with equal importance. 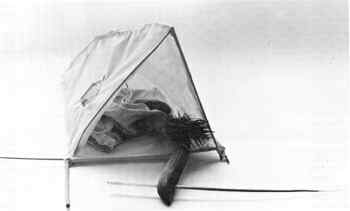 In exhibiting Recent Sculpture and Drawings Hellyar has, it seems, created a new and exciting vocabulary for contemporary New Zealand object-orientated sculpture at a time when it was just beginning to be forced into silence by the conceptualists.