In his film-making David Sims, is following closely in the footsteps of one of his Film Unit predecessors, Paul Maunder, who in the early 'seventies mounted three drama productions for television, Gone Up North For A While, One Of Those People That Live In The World and Landfall. Since then, the National Film Unit has concentrated almost exclusively on documentary film production, cooperating briefly with TV1 in the making of The Governor series.

Recently, Sims set himself the daunting task of adapting for the screen James K. Baxter's radio play Jack Winter's Dream - a highly stylised piece with a complex 'dream play' structure, hints of Strindberg and Bergman, and prose poetry akin to that of Dylan Thomas's Under Milkwood. 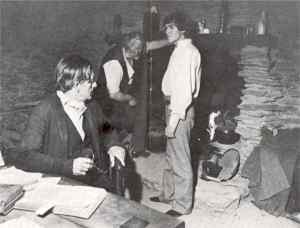 Sims is something of a veteran documentary film-maker: but this is his first major drama production. Since he joined the Film Unit in 1967, he has produced some twenty documentaries, among them, Taheretikitiki - The Making of a Maori Canoe (1974) The Kingston Flyer (1974) and Festival (1976). Sims concedes that the overall style of the Film Unit's documentaries would not have been appropriate for Jack Winter's Dream:'. .. often out of necessity the camera-work in documentaries is intentionally obtrusive, to impose an interest on the subject. In this film it is a lot more restrained. There are very few optical effects.'

Sims opted for a realistic interpretation of the radio play. His intention was to cater for the many tastes of a television audience. In consultation with Ron Highfield he discarded the idea of using abstract backdrops throughout, which this type of play would seem to invite, and instead chose on-location shooting in remote central Otago and on the specially-constructed set at the Film Unit's new Avalon studios. In the interests of realism, the Drover's Rest inn was built from twelve tons of schist, transported all the way from Alexandra.

Several of the crew and cast claimed some sort of connection with Baxter and his writings. Patric Carey, who plays the part of Jack Winter was founder of the Globe Theatre in Dunedin and staged a cycle of seven of Baxter's plays in 1967. Bernard Kearns, in the role of Webfoot Charlie, narrated the NZBS production of the radio play which was broadcast in 1958.

Jack Winter's Dream is an extremely rich film. Baxter, in the Listener article written prior to the broadcast of the radio play, explained his reasons for using the stylised 'poetic prose method': '... All those things that would otherwise on stage be visual - gesture, setting and appearance of actors - must find emotional equivalents in the spoken words.' The film version combines this elaborate dialogue and narration with equally demandingvisuals.ln the effort to retain the original text word-for-word, there is an occasional 'jar' when the narrator (Mervyn Thompson) comments upon an action that is otherwise adequately de-scribed in visual terms.

Special mention must be made of the music, composed for the film by John Charles, noted in particular for his musical contribution to The God Boy. His music for Jack Winter's Dream complements the narrative and mood superbly and is never obtrusive.

It was certainly no mean undertaking on Sims's part to adapt such a structurally-complex radio play for film, although a viewer unfamiliar with the radio play or text thereof could easily become swamped in the complexity of it all - the difficulties experienced when trying to adapt works not written expressly for the screen. Sims speaks of the lack of alternatives: 'the industry is too young yet; we haven't got any screenwriters, so we must adapt plays and novels.'