B.H. Friedman's account of the life of the outstanding patroness of American art, Gertrude Vanderbilt Whitney, offers a remarkable view of the world of the rich and the talented of the nineteenth and twentieth centuries - of lives privileged and glamorous, yet often fragmented and frustrating. Its authenticity is the result of his own extensive research in collaboration with Mrs. Whitney's granddaughter, Flora Miller Irving, now President of the Whitney Museum of American Art.

When Gertrude Vanderbilt married Henry Payne Whitney in 1896, two of America's wealthiest families were united. Henry was the boy across 57th Street on Fifth Avenue, educated for a career in law and business: but such was his wealth that his life focused on polo, racing stables and the sports of the rich. He took over his family responsibilities with little fuss and some interest. Business for him was natural, often perfunctory - a gentlemanly burden that must not interfere with his sporting life. He fulfilled his inherited financial obligations with diligence but often without zest. Much of his marriage was spent in long separations from his wife and family in pursuit of the life of a sportsman. 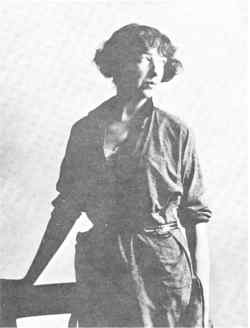 Gertrude Vanderbilt Whitney
in sculptor's garb
at the Whitney Studio

Gertrude was educated by tutors in New York and in Newport, Rhode Island, where the summer palaces of the wealthy were located. The brash hedonism of the parties of the 'Newport set' were often as lavish as coronations, organized with a formality that is enchanting to read about. For women of Gertrude's resources, travel in Europe, amongst the culture of the old world, played a serious role in her educational process. How could one travel in such circles as she, knowing well the intellectual European and American expatriate elite of her day, and not develop a great interest in the world of creative art? For Henry, the fashionable male chauvinism of the nineteenth century, with its emphasis on physical masculinity, shut Gertrude's world out of his comprehension, or rather of his willingness to comprehend.

As their paths began to diverge, Gertrude saw that a 'privileged life is no equivalent to an enchanted one'. The descriptions of her social obligations. . . the parties, dances, guests, the life at Newport... began to reveal a dull and a purposeless world that seemed to grow more meaningless day by day. Her voluminous diaries, notes, and line-a-day entries show clearly that the magic is wearing off. She would seek her magic elsewhere, mostly in Art, and specifically in American Art.

This volume is an important study for our time of serious liberation of women. One cannot help seeing the deep conflicts involved in raising three children, running the social whirl of the various households, building and designing more homes and studios, preparing for travel, returning from travel. We feel a tremendous surge of empathy when Gertrude at twenty-eight resumes her interest in drawing, finally deciding that sculpture is what she wants to do seriously, professionally, and on a large scale. Neither Harry's successes in business or sports, nor the children, nor friends, of which she has huge numbers, will ever be satisfying.

Reviewers of Friedman's biography have complained about the amount of detail. 'But that very detail is responsible for the scattering of her life between art, patronage, and family / social activities, including her many homes and studios', Friedman has commented: 'and even in art itself she made the fatal, and in many ways inevitable choice of doing public commissions, with their additional burdens of mechanics, meetings, funding and final execution'. Who really knows of her Columbus monument in Spain, commissioned through the Duke of Alba, or her Arlington fountain, or her memorial to the Titanic? These works doe not bring us into communion with the inner soul of the artist, but rather with a boring and public world of little taste and no interest in pure art.

Then where did her great contribution in art originate? The beginnings were in her studio on Eighth Street in Greenwich Village, where she did her most serious creative work. In 1915 she founded the Whitney Studio Club with twenty members - all liberal American artists whose works were certainly not welcomed in the conventional galleries of the day. Typical of Gertrude's independent view of what kind of art should be emphasised, she opened her gallery devoted to the free expression of 'non-partisan' American artists, many of whom showed their works publicly for the first time.

Such was its success that, by 1928, the Club had grown to four hundred members. It was no longer the pioneer organization of liberals. The battle had been won, and America's leading artists disbanded their 'club' to make way for the Whitney Studio Galleries, where both native and foreign works were to be shown. No school of art was to be emphasized and there was nothing philanthropic about this enterprise. It was an exhibiting gallery for the best of contemporary art. Between November 1928 and March 1930, there were forty one-man shows, only two of them foreign. The gallery was run with the strong positive hand of Gertrude's controversial but determined associate, Juliana Force.

By 1929, Gertrude had acquired more than six hundred works of contemporary American art - the largest collection of its kind at the time. It had far outgrown the exhibition space of the Whitney Studio Gallery. Gertrude dispatched Juliana Force to the Metropolitan Museum of Art to offer the collection, and even to suggest the possibility of building a wing to house it. The collection was flatly refused. Thus the Whitney Museum of Art was born. (One wonders how the Metropolitan viewed this decision retrospectively as the new Whitney Museum, in its dramatic building designed by Marcel Breuer, rose impressively a few blocks away on Madison Avenue a decade ago.) Mrs Force was made Director, and half a dozen known artists were made informal advisors. As Gertrude pointed out, this museum is born not as the ward of a committee. Its guardians were two ladies of singularly complementary qualities and strong, directed minds. We are the fortunate beneficiaries of this determined vision in the dynamic Whitney Museum as it exists today.

There is a poignancy to Gertrude's life that permeates this biography: not her personal failure, but, rather, the strange, out-of-date values that were thrust upon her. As one contemporary said: 'Gertrude is one of those people who seems to have more time the busier she is. . . time for everything, family, friends, institutions, the creation of sculptureand a written record of all these activities.'

One must conclude that for some individuals there is a discipline that goes with wealth, a training for how to conduct one's life. B.H. Friedman has given us the opportunity to see this quality in Gertrude Vanderbilt Whitney at first hand. He has written a remarkable saga of the times, of life and culture, and above all, of the staunch durability of creative art in a hostile world.