When did you start the Series?
The first idea occurred in mid-1975. I did some drawings in June '76; and the first painting in July '76.
Are you still using the lattice motif?
Yes. There are endless possibilities in it.
What about the 'serial' method of working?
The serial method occurs naturally when you are trying to press forward to you-don't-know-what. Each painting leads to the next. Usually you have to work through quite a few to discover what you want. 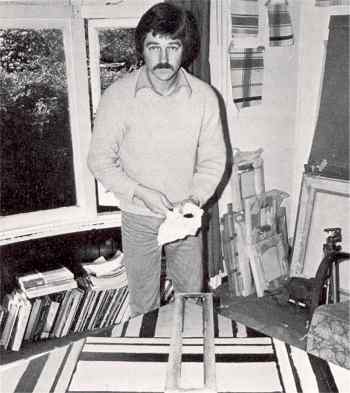 Do you always work in series?
My work seems to fall mostly into series - the girl paintings, roller-strokes, sprayed stripes - though I'm also working on completely different ideas and separate works at the same time.
Has there been a development in the series?
The basic over-and-under pattern has remained constant throughout the series: but the look and feeling of the paintings has changed through several stages.
The first ones were vertical rectangles: with vertical, horizontal and diagonal white bands defined by black crayon edging. The white overlaps were both positive and negative shapes. The colour formed a segmented grid between and behind the white bands. They tended to look like trellis fences. I shifted this system to a square format to make it more logical and balanced, and to give a greater sense of scale. Later on, the horizontal and vertical grid was eliminated and the colours and white bands were arranged diagonally. Gradually the number of bands was reduced and thin one-quarter-inch taped edging substituted for the crayon edging. 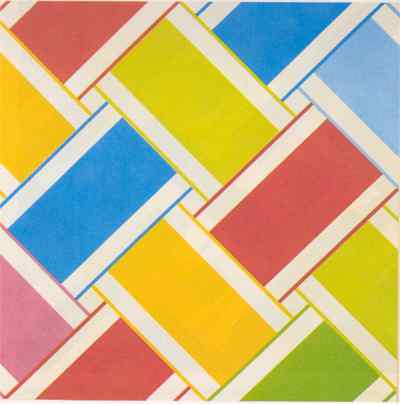 More recently I've replaced the white ground with black, and reversed the role of the coloured bands. At the moment the width of the bands has become varied, and the colour combinations have increased in number. The alterations are all intuitive.
Do you think there has been an improvement?
With all the changes, hopefully they work better now. I think the newer ones have more over-all strength and impact.
Has it been the most successful series for you so far?
I've enjoyed doing them. Running diagonals from corner to corner immediately felt right and also solved a number of formal and expressive problems for me.
What artistic problems do you look at in the series?
I think the essential artistic problem painters have here is finding a personal identity and context in relation to the Immediate living and working situation; and more importantly to advanced contemporary art overseas.
Interrelated with this are painting problems: how to use the shape and edge; what kind of colour and space to have; what to do with the surface; and how all these elements contribute to the whole. 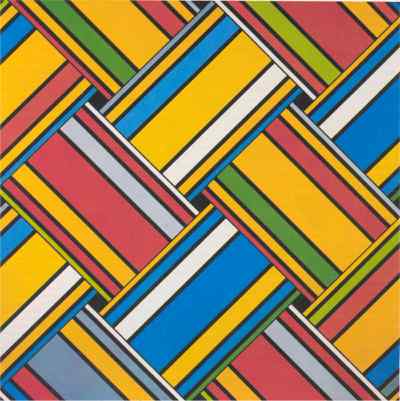 What is the role of the various elements. (a) colour; (b) edges; (c) overlaps?
All the pictorial elements should be as integrated as possible: the colour, edge, surface, form and space - the problem-solving and the discovery of the content, idea and feeling are all one thing.
COLOUR: In the first Lattices I was trying to relate the colours to the white ground; more recently to each other in a more pure colour abstract way. The colours are there to generate feeling.
EDGES: I attempt to get the edge of the painting at the exact coalescing point of the forms on the surface. The edge should force the forms of the painting inwards; yet also stretch the tension, of the bands of colour outwards (pulling the whole surface flat and tense just as it physically stretches the canvas).
OVERLAPS: The overlaps give a sense of layered space back into depth - also a buckled over-and-under weaving effect: but keep the surface of the canvas flat and whole. The illusion of interwoven space redoubles the colour-space making both more abstract. The weaving also provides a way of avoiding transparent overlap. Somehow the visual space of the painting has to be at ease and accommodated to the edge of the painting. The problem is how to keep the surface literal at every point - yet visual and pictorial at the same moment.
I try to have the feeling that I'm making a total-picture, coloured object, rather than just treating the surface as something upon which one puts arbitrary colours and paint shapes. 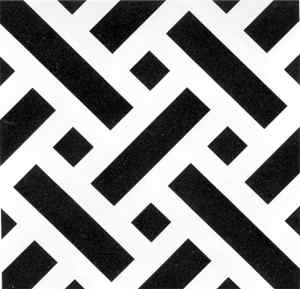 Are they all on canvas: and is there any special reason for that?
Yes: on white-primed cotton duck - some on raw duck. I like canvas. It has a good feel. There is something exciting about a tautly-stretched canvas surface.
What about scale? Are you satisfied with the sizes?
I would have liked to increase the scale of them - to say ten feet or twelve feet square. This is of course impractical, considering the problems of storage, or of obtaining wide canvas. But I do feel they would look better if bigger.
How do you see these works in relation to the contemporary New Zealand art situation?
One of the things I'm trying to do is to make the whole canvas the subject, rather than have the subject inside the painting as in much New Zealand work to come up-to-date with the latest methods.
Are there any influences?
I'm influenced by the things I see and experience around me every day. I admire the paintings of Gordon Walters very much; and also contemporary American painting and its ideas. I think some of the Lattice patterns are my own.
Do you mind the references to figuration - fences, suburban landscape?
The first ones happened to look like white trellis (fences); more recent ones like the plastic backs of folding chairs. References are inevitable with the overlapping system, although it's not what the paintings are about. I happen to like the suburban landscape, with its neatness, bright colours, clean edges - an area of white weatherboards, a touch of bright red curtain to one side, green hedge in front and blue sky above: it's what I see from my studio window - a very arbitrary, scattered, yet very even sort of colour-order that is suburbia. I don't mind the reference to these things: but I'm trying to do something else. I've tried to make the work more abstract as I've gone along. 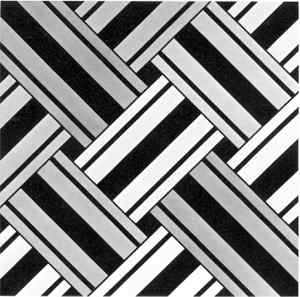 How are the paintings made?
The canvases are painted horizontally on saw-horses. I work on them from all sides, so as to treat them like objects. (lay down the bands with masking tape, shifting the width intuitively until it feels right. I then paint in the colours directly. I never overpaint the colours or alter them. If something's wrong with the paint thickness or colour or proportion I destroy it and start again. The first Lattices were made by taping from corner to corner, then putting crayon each side of the tape until the system covered the entire canvas.
How many Lattices are there?
I started numbering them early in January 1977 for identification purposes. Since then I've done twenty-seven small Lattices (up to 32 by 32 inches), and fifty-six larger ones (up to 68 by 68 inches). Before that there are probably about another fifty works of different shapes and sizes, including the first experimental ones - in all, probably over 150 paintings. I've also destroyed quite a few.
What importance do you give to preliminary studies?
The first ones were done without preliminary studies. Later on, I made rough sketches and worked out proportion and measurements beforehand to see what it would look like. Gradually, as the series has developed, so has the complexity of the studies. Now, I do drawings to scale, and colour studies - in the last few months full-sized mock-ups on canvas, to consider more systematically all the possibilities and variations. But, with all the preliminary studies, none of the paintings ever turns out as planned. I usually end up playing around with the taping on the canvas to change the scale. 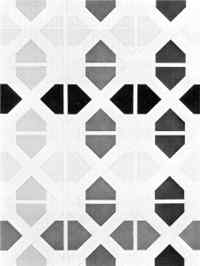 Speaking of pictorial movement: do you see the Lattices as expansive?
I've attempted to get a feeling of balanced tension between the sense of movement and expansion of the diagonals and the self-contained nature of the image. I like the idea of the bands running right across and out of the painting in a free uncontained way, and yet meeting at the edge of a logical cropping-point - although the different Lattice formats do different things in these respects.
Where-to after the Lattices?
That's a good question. It's a bit of a problem. I've worked on other ideas concurrently with the Lattices to open up other possibilities. I think the lattice image is capable of further extension. There's always somewhere one can go. You just have to keep working at it.

IAN SCOTT was born in England in 1945 and came to New Zealand in 1952. He began painting (landscapes) at fifteen. His first exhibition was in 1963; and in 1965 he won the junior section of the Kelliher Prize. He was educated at Kelston Boys' High School and later at Elam (1964-67), graduating with honours. After this, his work moved from portraiture, to realism (1968-70), to abstract expressionism (1971-72). In 1972 he started painting full-time. He began the Lattice series of paintings in 1976. He won the Pakuranga Art Award in 1977 and 1978, and the Benson and Hedges Art Award in 1978. He is presently living in Auckland. As well as being widely represented in group shows Ian Scott has had one-man shows in Auckland and Wellington. The latter include exhibitions at the Barry Lett Gallery (1970), the Peter McLeary Gallery (1970,1974), the Bosshard Galleries (1977) and the Petar/]ames Gallery (1978).

The answers in this article were written by Ian Scott, in response to written questions put to the artist by Michael Dunn.