John Reid and the Film of Middle Age Spread

Visual montage was a feature of Circa Theatre's premiere production of Roger Hall's second stage hit, Middle Age Spread, in November 1977. To some degree, the technique, used to link scenes in the play, proved almost too powerful in its dramatic elaboration of both characters and situation.

In the film, which transported the main protagonists away from the close confines of the 'live' presentation, the celluloid montages tended to break down the pinched, moral claustrophobia of New Zealand suburbia achieved on stage.

In another sense, however, they indicated just how adaptable the Hall script might be to the film medium.

From June, cinema audiences have been able to gauge how successful the creator of those montages, thirty-two year-old director / actor John Reid, has been in bringing the play to a larger, and essentially different, public. (For the record, Reid also played Robert in that original Circa Theatre production.)

Over the last ten years, Reid has always been somewhere near the centre of the movement which finally culminated with the Government's establishment of a Film Commission last year. In conversation, he talks about his approach in adapting a successful locally-written stage play to the screen; of the problems facing a director in the burgeoning film scene; and of the way ahead.

M.N.: One is aware of your involvement in the original production of Middle Age Spread. How did you set about getting a film version off the ground?
J.R.: The success of the stage play was an obvious starting point. I also found that John Barnett [a Wellington film producer] was thinking about it as film material. So, we teamed up.
We believed it was a project we could get going reasonably quickly. This was at a time in February 1978 - when it looked possible that Skin Deep might not go ahead. With the Film Commission about to be formally established, and something of a lull developing, following the release of Sleeping Dogs and Solo, we felt it important from a film industry point of view that a further project be clearly under way.
M.N.: How did you get the production together?
J.R.: We received an initial pre-production grant from the Interim Film Commission, and then Barney put the rest of the deal together. This involved one major private investor. TV Two also has a small interest; and various contras were arranged.
We wrote four screenplays before being satisfied. This involved Keith Aberdein, largely, myself and Roger Hall, who threw in a few ideas. This took us through to about July. Production began in the middle of September last year. It was a four-week shoot - twenty-two shooting days - all in Auckland. It is a low budget feature and the Film Commission has no investment, as such, above its pre-production grant. ... 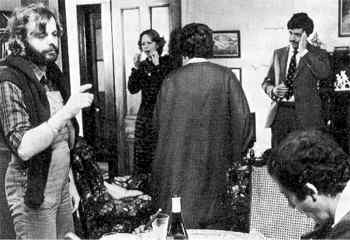 M.N.: How low is a low budget?
J.R.: Let's put it this way. It's a figure which should get the money invested back - if it does the average business of those locally-made feature films released here over the last three years. From what we understand, the budget for Sleeping Dogs was about $500,000; Solo cost about $250,000; and Skin Deep $180,000. The budget for Sons For the Return Home, which is now shooting, is around $300.000. . .
We set out to make Middle Age Spread on what could be said to be a B-grade budget. We felt that we would get the money back, if it does the average business of other local features already released in the country.
This is important: because if it does, it will encourage people in the industry and, more importantly, encourage those who wish to invest in films. . .
M.N.: What problems were there in adapting ;'" the stage play to the screen?
J.R.: Middle Age Spread, I believe, will prove to be very much a performance film - an actor's film, if you like. The original script, naturally, concentrates on dialogue.
Fortunately, all those who have seen the final cut of the film, say that it looks like a film, and not like a filmed play. In adapting the play, we turned the original ten scenes into something like fifty-four scenes. Instead of having people talk all the time, we have visualised a lot of the original dialogue. But I believe we have remained faithful to the play's ideas.
M.N.: And the characters, as one remembers them from the stage presentation?
J.R.: We have centred on one character, Colin, who is played by Grant Tilly. He also created this role in the original stage production. After all, the story is essentially about Colin's dilemma and he should be the centrepiece. I believe it is the best performance Tilly has ever done. He jumped in, boots and all. Dorothy McKegg and Donna Akersten also come to the film from the original cast. The other main actors are Bevan Wilson, Bridget Armstrong, and an Australian Peter Sumner, who had a dozen lines in Star Wars. The supports include Ian Watkin, Yvonne Lawley, John Atha and Wiki Oman.
For those who know the play, there will be a few surprises in the film. . . We started editing in late October, and finished in the middle of February.
M.N.: With Middle Age Spread put to bed, so to speak, what other projects have you in hand?
J.R.: I'm driving a cab, at the moment...
I'm trying to get a range of projects off the ground, but the situation is that no-one employs a director as such. You have to go out and make your own work, because there are very few producers, as yet, in-the private sector of the film industry.
I have projects before six organisations . . .
M.N.: Can you tell us about them?
J.R.: Well, after two years of struggle, Te Ohaki O Te Po has been completed. This is a documentary on the restoration of two Maori meeting houses near Gisborne. One is the famous Te Kooti house at Rongopai in the Waitui valley.
I am also keen to make a documentary on the Nelson painter, Jane Evans, one of the most vivacious and positive persons you could wish to meet. . .
I'm also interested in a film based on an historical incident, with a strong political flavour, for which I have received a small research grant from the Arts Council.
I also have an eye on a film adaptation of the Ian Wedde novel Dick Seddon's Great Drive.
M.N.: Are you content with the way the film industry is developing?
J.R.: I must say that during the last couple of months I've been looking at things a little differently. . .
I have become tired of the way things can develop in a non-business-like way. People are launching a lot of projects from no proper basis at all. This way, huge amounts of money could get frittered away.
More and more, I believe we have to adopt proper business management in the industry. There's a lot of dreaming. I get impatient, and say, 'oh yeah, I've heard that so many times before'.
I'm also frustrated that not enough is happening.. .
M.N.: And the commission itself?
J.R.: I think the commission has tended to become totally concerned with feature film production. The industrial basis for production is in television - projects for television. The commission, perhaps, has got to look at a lot of other areas, as well. Certainly, screen writing. It must also assist in the early development of projects in order that we can come up with the one that will really excite and grab the imagination of the public. That could be the Geoff Murphy project, Meatball. . .
But I believe we have already proved that we have the talents in all departments of film-making. . .