In Ralph Paine's exhibition of twenty-one gouaches 'about art, politics and other things' the paintings must be considered as a whole: because particular ones go together to make general statements. There are, for instance, various types of representation of the human figure - Cubist, photographic, comic-book - which combine many possibilities in an effort to achieve completeness.

Paine is concerned with the contemporary. His work has affinities with the New Wave in Rock. It is in the same fragmented state as that presented by Talking Heads or Elvis Costello. There is the latter's concern with contemporary fascism, rendered symbolically in Fascist Still-Life; and in Living with the Woman I Love, the artist's quotidian existence can only be expressed by presenting elements of it, each in its own little box - a record, a cat, a cigarette, a letter, an empty canvas. 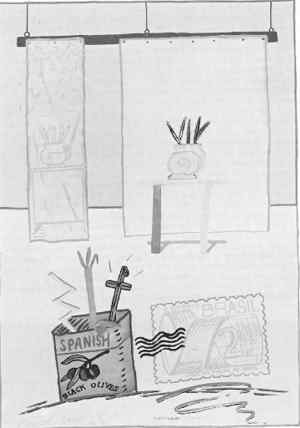 By acknowledging the indefatigability of the world's complexity this technique comes to terms with it. One simply combines elements of one's perceptions to form a weltanschauung by numbers, as Paine combines them to form paintings. Although they remain in their boxes, there is no sense of a lost vision of coherence. Any final reconciliation is unnecessary. This version of an old problem is a characteristically New Wave one. It is expressed, for instance, in Talking Heads' Pulled Up:
Cast a shadow on the living-room wall
Dark and savage with a profile so sharp
Deep and wonderful, food on the table
There's really no hurry, I'll eat in a while.

The colours in these paintings are simple. There are no lush New Zealand greens and blues. Most of Paine's colours could be found in commercials or comics. Much is made (particularly in those paintings which have art as their subject) of red, yellow and blue.

The range of subjects is impressive. The viewer obtains an exhilarating sense of the global from the many references to other countries. Otherness is emphasised by taking items from their national contexts and placing them in non-specific ones. 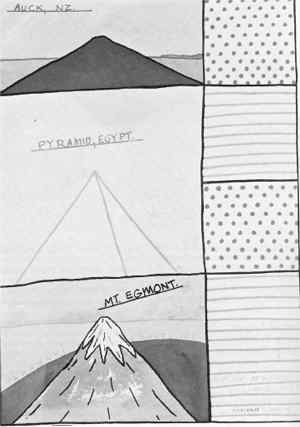 These are entertainments - objects to which the viewer must react with pleasure. Their disjointed structure, with items placed in seemingly random juxtapositions, prevents the eye from resting, as it is sent from item to item, seeking the relationships which must be there. They are not static objects involving a gestalt, but, instead, have a kinetic effect. The viewer becomes lost in their fictional world - although it is no less a real world for being so.

Perhaps the wittiest painting in the collection is Artistic Guidelines, which features the three basic geometrical shapes above a pointillist tree, a Mondrian, a Matisse and a Warhol, symbolising nature, modern art, people and politics - the implication being that permutations of these are all that are necessary to create works of art.