In his first one-man show, Rod Wills has exhibited thirty colour prints from an on-going series called Urban Drive. The works (each about 220 x 150mm) were generally well-printed: although some seemed to possess a kind of darkness about them. Whether this was deliberate or accidental, it cast a somewhat sombre mood over a show that in other aspects was a flamboyant celebration of colourful visual experiences.

The exhibition consisted primarily of objective views of suburban houses, buildings and other objects; and was not dominated by stagey composition or an overriding colour theme. The strongest impression I received from the show as a whole was that it displayed a remarkable lack of pretension, even to the point of blandness. It was not the blandness that spells out ho-hum: but something much more subtle, disguising a carefully-expressed social commentary on the aspirations of people in suburbia. The physical and decorative elements of housing have symbolic overtones that the residents use to communicate with others about themselves. 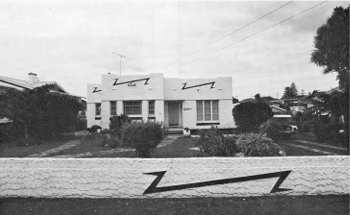 Thus the lightning motif that decorates the house and front fence in Papatoetoe, Auckland, May 1979 allows us to conjecture about the kinds of persons living within. So does the concrete frog sitting under the striped umbrella on a pillar in a little round front garden in Takanini, Auckland May 1979; and the huge phallic cactus, as high as the chimney, within a tightly-controlled environment in Papakura, May 1979.

The rounded, flat-roofed architecture that was New Zealand Everyman's version of Art Decoratif in the 1930s, has an elegance and presence all of its own. The best local examples are quite beautiful; the worst, hideous: but still possessing that strange beauty sometimes found in kitsch objects. Wills has concentrated on these latter examples littering our suburban landscape. About half the photographs in the show are of such houses. The other half also reflects his fascination with unusual visual experiences. A wrapped car; what appears to be a mutant launch; an aeroplane seeming to be pilotless and on the point of collision with the ground; a covered, faceless, featureless merry-go-round - all are depicted with almost clinical precision. 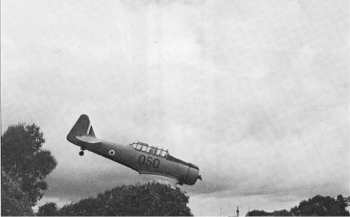 Wills's use of wide-angle lens in some photographs has been interpreted by several reviewers as designed deliberately to emphasize form: but it seems to me to be dictated more by the nature of the physical situation in which he found himself than by any superfluous aesthetic considerations. The whole nature of the photographs is that of objectivity - which is good in that it allows the photographs to speak for themselves, free of any attitudinising by the photographer.

For these photographs to be wholly successful, however, closer attention needs to be paid to detail in the prints. In order to more fully explore the visual richness of the subjects, perhaps Wills needs to use a camera with a larger negative which will give greater rendition of detail. Rendition of detail is almost a prerequisite of photographs like these, as the nature of their objectivism dictates a clear, uncluttered examination of that which is within the photograph.

Perhaps by virtue of the 35mm format used by Wills, (but I suspect also by virtue of the personality of the photographer as well) these photographs for all their formality still contain an element of looseness. For me this greatly adds to their over-all impact. Whether this essential looseness would still be present with another format is a matter for conjecture. I suspect it would. 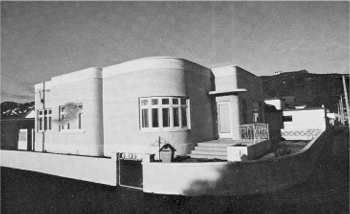 Urban Drive is a refreshingly unassuming first exhibition that works on more than one level. (Snaps Gallery)