John Andrew is a painter who has a habit of allowing four or five years to elapse between his exhibitions. His first showing in Auckland was at The Barry Lett Galleries in 1970; five years later he exhibited there again; and only last July we saw his latest work at the same venue.

The 1970 exhibition made quite an impression in Auckland. The very large canvases in high-key colours could have been fitted into the surrealist aesthetic: but they had reminiscences, too, of the early Flemish masters, with their meticulously-painted pieces of virtuoso still-life, fitted into niches within the composition. 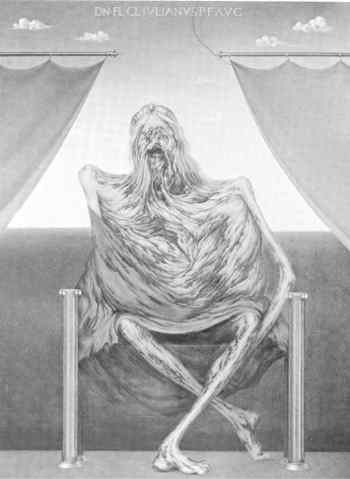 In John Andrew's latest exhibition there are some of the preoccupations evident in his 1970 show. Now, however, the bright hues of the earlier works have been replaced by a more sombre series of coloured greys: so that some of the paintings seem to have been carried out almost in grisaille.

There were just six paintings in the show: Evening Landscape; Saint John on Patmos; Julian II (illustrated here); Scene from the Life of Saint Ursula at the Repository of Ten Thousand Virgins, together with 'Details' from the latter.

These titles may convey some impression of Andrew's subject-matter. He has evidently looked closely at the Venetian painters of the High Renaissance (particularly at Carpaccio: details from this artist's Story of Saint Ursula are reproduced in Berenson's Italian Painters of The Renaissance); and at painters like Grunewald and Hieronymus Bosch. In Andrew's works, echoes from the iconography of these artists find expression in a kind of disintegration of the forms, which take on a flayed appearance analogous to those in the portraits and figures of Francis Bacon.

Andrew's singular technique deserves some comment. It involves the use of wax glazes and a subsequent polishing of the surface. The resulting soft transparency, a mysterious glow rising from the ground layers of the painting, creates an atmosphere that is very much his own. Andrew professes an especial sensitivity to the matiere of oil paint, and talks of the wax glazes that often give a magic glow to the works of Titian and Rubens.

Whatever one thinks of the atmosphere or the handling of the subject-matter in Andrew's works, he has certainly achieved for himself the status of an 'original' in New Zealand painting. There is no one else quite like him.